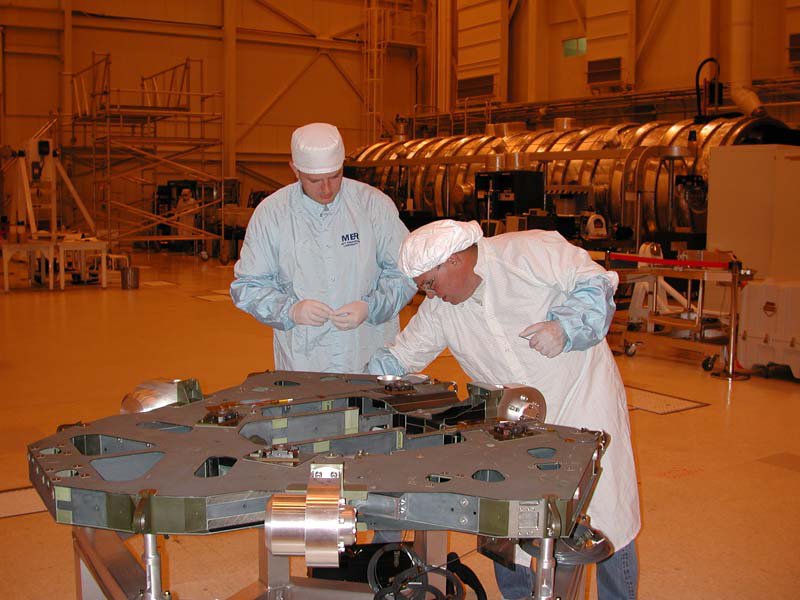 Engineers on the Mars Exploration Rover project make necessary adjustments to an engineering model of the rover. 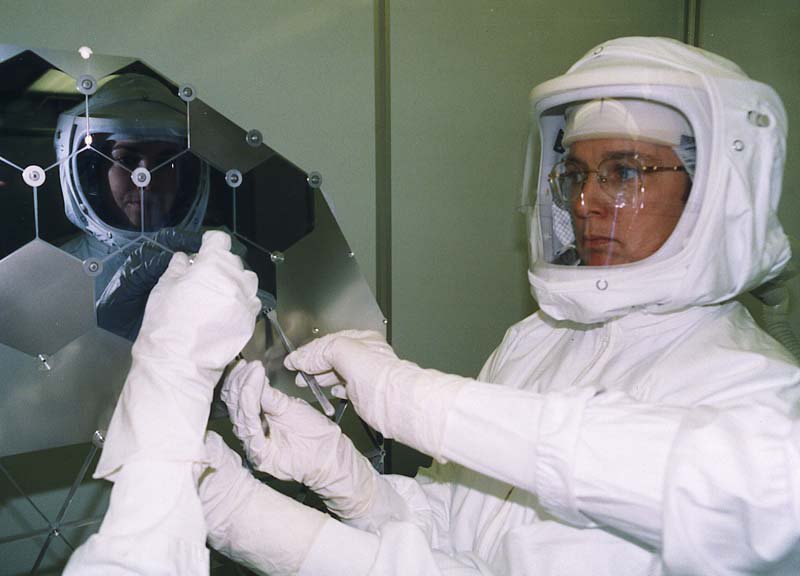 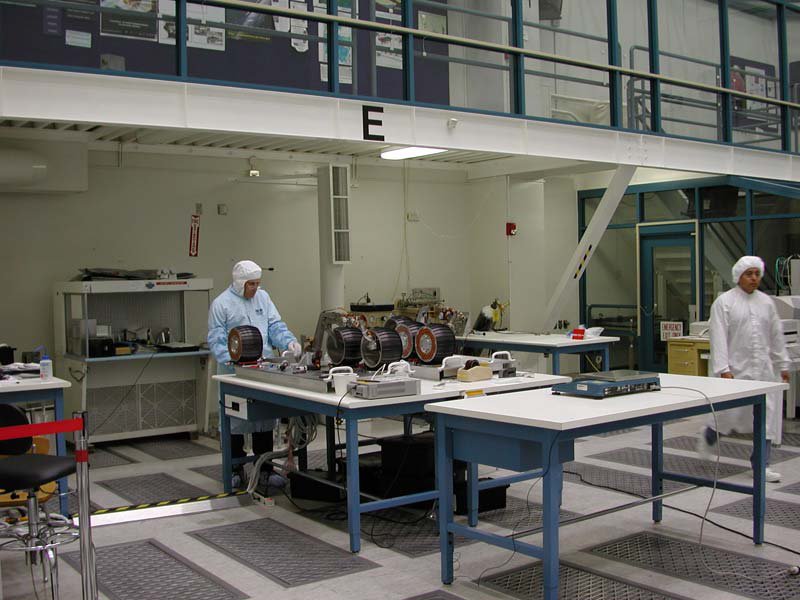 Any fan of television medical dramas knows that operating rooms must be sterile. You don't have to be a doctor, or even play one on TV, to scrub in before entering the cleanroom high bays at JPL.

Any fan of television medical dramas knows that operating rooms must be sterile. You don't have to be a doctor, or even play one on TV, to "scrub in" before entering the cleanroom high bays at JPL. The Spacecraft Assembly Facility, which houses high bays one and two, is as unassuming as most other buildings; its only distinction is its height - high bay one is nearly 14 meters (approximately 45 feet) tall and high bay two has a width, length and height of approximately 21 meters (about 70 feet). The humble exterior gives little indication that some of the most famous spacecraft have been assembled there. Before the Mariner and Pathfinder spacecraft reached Mars and before Voyager began its incredible ride through the solar system, they were prepared for their extraterrestrial journeys in one of the cleanest environments on Earth.

"Humans are the dirtiest things that enter a cleanroom," said Victor Mora, supervisor of the Flight System Integration and Test Flight Systems Section.

Mora and Rachel Bussey, lead for janitorial service, are responsible for implementing and maintaining the stringent cleanroom policies.

Even the cleanest people present a very real threat to the scientific integrity of a piece of hardware or an entire mission. Extreme precautions are taken to minimize human contamination of flight hardware and payloads. To reduce the amount of human "shedding," or the exfoliation of skin and hair, anyone entering a cleanroom must go through a preparation procedure. First, a shoe cleaning machine's vigorous brush removes loose particles. Next, an air shower, which resembles an ordinary stall shower, blows contaminants from clothing.

A door on the opposite side of the shower leads to the robing room. There, a sticky mat removes any remaining particles from the shoes. Depending on the current cleanliness requirements of the cleanroom, individuals will either don a full "bunny suit" which covers nearly the entire body, or just a robe, a cap (shower cap-like hood for hair) and shoe covers. Men with facial hair must wear masks.

"Cleanroom employees must serve as police constantly," Bussey said. "They must monitor and replace any garments with tears or holes that may pose a hazard by allowing contaminants to escape."

Typically, several projects are housed in the high bays simultaneously. For example, the Mars Exploration Rover project occupies a large portion of high bay one, while a large thermal vacuum chamber in one corner is being used to test laser interferometry techniques. Several Earth-observing missions are currently being tested in high bay two.

High bay conditions depend on the requirements of the projects that are housed within them. The default cleanroom settings are determined by the project with the most stringent cleanliness requirements. Both high bays are class 100,000. This means that in every cubic foot (about 28 liters) of air there must be no more than 100,000 particles at one-half of a micron and no more than 700 particles at five microns or larger. This may sound like many particles, but they are incredibly minute; for example, one strand of human hair measures 100 microns. A typical home or school usually measures in the 200,000-300,000 class.

Unlike many of us who wait until right before company arrives to dust, cleanroom workers must continuously remove any particles that could potentially contaminate. Since micron-sized particles are not visible to the human eye, cleanroom employees rely on highly sensitive particle counters that give a constant readout to maintain an acceptable cleanliness level. Witness plates (essentially Petri dishes) collect contaminants from the airflow, which are then viewed under a microscope to determine the amount and characteristics of the particles.

There are also obvious things that can be done to maintain the purity of a cleanroom, like swabbing the floors with a mixture of isopropyl alcohol and de-ionized water, and using high efficiency particulate arresting (HEPA) filter vacuums. In order to assure that dirty air doesn't enter the cleanroom when external doors are opened, a positive airflow is continuously in effect that pushes on the external air so it cannot enter. An airlock chamber connects the two high bays and serves as a safe entrance, exit and cleaning area for equipment or hardware.

Engineers and scientists know that in order to feel the kind of exhilaration that accompanies a successful space mission, they must seek perfection in every step of its planning. The cleanliness of the room where the spacecraft are built is one of the most fundamental and, perhaps, most overlooked pieces of the overall picture of what is required to ensure that the spacecraft can perform its mission when it arrives at its destination.

NASA's Genesis mission, which launched in August 2001, is now collecting samples of the solar wind and will return them in its delicate collector plates in September 2004. In order to accommodate this vital mission, engineers and scientists at NASA's Johnson Space Center in Houston, Texas, built a class ten cleanroom exclusively for the spacecraft to ensure that no contaminants from Earth accompanied the Genesis spacecraft to its destination in space. That means that a mere ten particles (one micron in size) are present per cubic foot of air per minute.
Rover home page