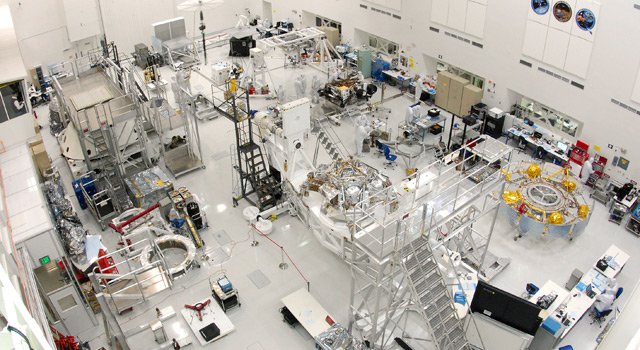 This wide-angle view shows the High Bay 1 cleanroom inside the Spacecraft Assembly Facility at NASA's Jet Propulsion Laboratory, Pasadena, Calif. Specialists are working on components of the Mars Science Laboratory spacecraft in this image from January 2011.› Full image and caption
Credit: NASA/JPL-Caltech

The Spacecraft Assembly Facility at NASA's Jet Propulsion Laboratory has birthed robotic explorers sent to destinations throughout the solar system over the past five decades.

The Spacecraft Assembly Facility of NASA's Jet Propulsion Laboratory in Pasadena, Calif., was constructed in 1961 to support NASA's Ranger and Mariner missions to the moon, Venus and Mars.

America had entered the Space Age just three years earlier, with the launch of the JPL-built Explorer 1 spacecraft.

The Spacecraft Assembly Facility, also known as JPL Building 179, originally had just one high bay, the large chamber now named High Bay 1. It is about 80 feet by 120 feet (about 24 by 36 meters). In contrast to the cleanliness standards for spacecraft assembly today, in the early days of the facility, personnel were even permitted to smoke inside this high bay.

All JPL-built spacecraft through the Viking Orbiters (launched to Mars in 1975) were built in High Bay 1. At times during the 1960s, as many as five different spacecraft were being assembled at the same time in the facility.

After the original construction of the high bay, the System Test Complex on the south side of the high bay's windows was added. A second high bay, about 70 feet by 70 feet (21 meters by 21 meters) was finished in 1976 to support the Voyager Project. Spacecraft assembled in High Bay 2 have included Voyager 1 and 2, Galileo and Cassini.

The project being assembled and tested in High Bay 1 in spring 2011 is the Mars Science Laboratory, including its rover, Curiosity. The mission is scheduled for launch in November 2011. Mars rovers Spirit and Opportunity were also built in High Bay 1.

Emblems on the wall of High Bay 1 represent all the missions (spacecraft and instruments) that were assembled in the Spacecraft Assembly Facility, regardless of which high bay was used. These include the first successful missions to Venus, Mars, Jupiter, Saturn, Uranus and Neptune, as well as Earth's moon. The facility has also built Earth-science instruments, plus Wide Field and Planetary Cameras that flew on the Hubble Space Telescope.

Both of the high bays are certified to a cleanliness level of Class 10,000, which means that there are less than 10,000 particles of 0.5 micron (half a millionth of a meter or yard) or larger in size per cubic foot of air volume. It is a great place to work if you have allergies. The filtration systems in the high bays are effective in reducing both particulates as well as hydrocarbons. The system maintained acceptable levels even when a brush fire raged near JPL in 2009.

Personnel working in the high bay wear protective clothing to minimize particles and bacteria reaching the spacecraft and the facility. All the equipment that enters the high bay is cleaned first with approved solvents (usually isopropyl alcohol). Both high bays are equipped with continuous remote monitoring for environmental conditions and cleanliness levels to ensure system safety and quick response to anomalous conditions.