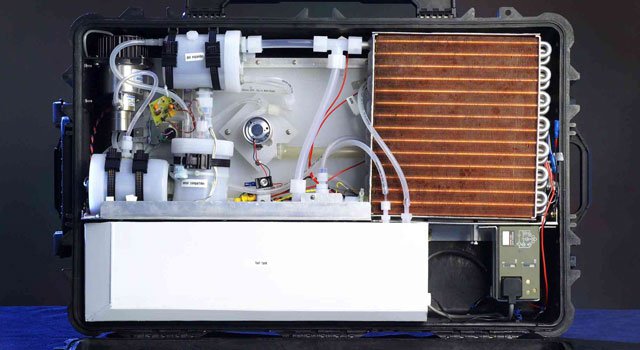 A clean, efficient technology to generate grid-independent electricity from methanol, developed by a JPL team in partnership with USC, has been licensed to a private company.

A team of scientists at NASA's Jet Propulsion Laboratory in Pasadena, Calif., in partnership with the University of Southern California in Los Angeles, developed a Direct Methanol Fuel Cell technology for future Department of Defense and commercial applications. Recently, USC and the California Institute of Technology in Pasadena, which manages JPL for NASA, awarded a license to SFC Energy, Inc., the U.S. affiliate of SFC Energy AG. The non-exclusive license for the technology will facilitate the expansion of the company's methanol fuel cell products into the U.S. market.

This novel fuel cell technology uses liquid methanol as a fuel to produce electrical energy, and does not require any fuel processing. Pure water and carbon dioxide are the only byproducts of the fuel cell, and no pollutants are emitted. Direct Methanol Fuel Cells offer several advantages over other current fuel cell systems, especially with regard to simplicity of design and higher energy density. Current systems rely on hydrogen gas, a substance that is more difficult to transport and store.

"JPL invented the Direct Methanol Fuel Cell concept and also made significant contributions to all the facets of the technology. These contributions include: development of advanced catalyst materials, high-performance fuel cell membrane electrode assemblies, compact fuel cell stacks, and system designs," said JPL Power Technology Program Manager Rao Surampudi. He explained that USC worked with JPL in the development and advancement of this technology for defense and commercial applications.

Over the years, those applications have expanded from the original defense applications to include such uses as battery chargers for consumer electronics, electric vehicles, stand-alone power systems, and uninterrupted/emergency power supplies.

More information is available at: http://www.ott.caltech.edu/

The Caltech and NASA technology transfer programs are designed to help U.S. companies improve their competitive positions in the global economy by transferring JPL technology into the marketplace.