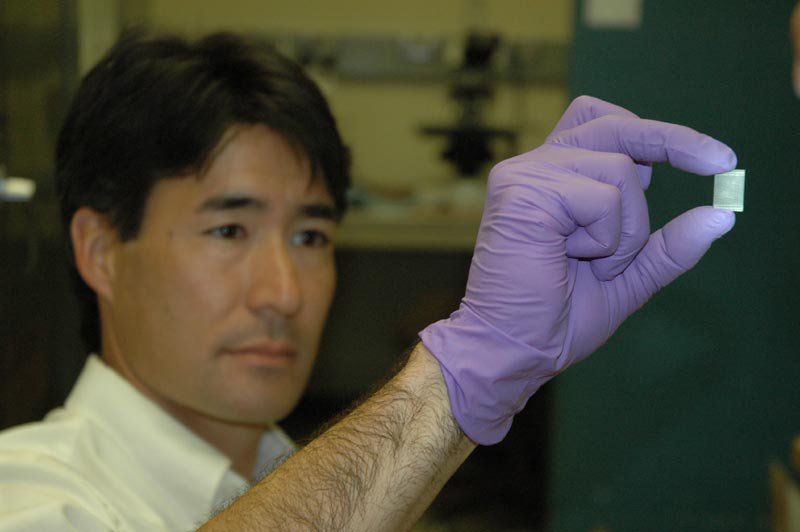 Dr. Jeff Sakamoto, a material scientist in the Power and Sensor Technology section, holds one of the nerve guidance devices currently being tested at the University of California, San Diego. The technology might one day help people living with spinal cord injuries.
Credit: NASA/JPL

Technology developed to help build better batteries for space missions is also being used to create a device that might one day help people living with spinal cord injuries.

Technology developed to help build better batteries for space missions is also being used to create a device that might one day help people living with spinal cord injuries.

These individuals experience difficulties in many aspects of life including mobility, work or leisure activities. Once the spinal cord is injured, damage to the central nervous system is typically permanent, as damaged nerves do not spontaneously regenerate. Instead, the nerves are affected by scar-like tissue resulting in disabilities. Special cells can artificially stimulate regeneration; however, nerve growth is limited and generally does not extend past the injury to reconnect with healthy nerve tissue.

Scientists at NASA's Jet Propulsion Laboratory, Pasadena, Calif., are assisting researchers at the Veterans Affairs San Diego Healthcare System and the University of California, San Diego School of Medicine, in developing a device that might repair spinal cord injuries.

The same technology used to improve batteries is used to develop a nerve guidance device that can be surgically implanted into the damaged area of an injured spinal cord. The device, which comes in different sizes, looks similar to honeycomb. But instead of holes the size of bees, the holes are approximately the size of a human hair. When implanted in rats, the device about the size of a pencil tip, promotes and guides new nerve growth across the damaged area with the intent of reestablishing previously interrupted nerve continuity. Recent testing on rodents at UC San Diego has been promising. Further testing is needed before human trials can begin.

Dr. Jeff Sakamoto, a materials scientist in the Power and Sensor Technology Section at JPL builds the device using optical fiber technology. Sakamoto starts with a bundle of dissolvable, optical fibers. He then pours a sea algae-like material that is heated to 200 degrees Fahrenheit around the fibers to form a mold. The material, called agarose, is a gel that is also used in DNA testing. Once it cools, the agarose solidifies and the optical fibers are selectively removed using solvents. The result: a biocompatible device comprised of long channels that can be integrated within the spinal cord to guide nerve cells.

Before the device is implanted, it is soaked in a thick, syrupy liquid, which contains special cells that promote nerve growth. The device and the cells work together to guide new nerves as they grow through the injury. Dr. Mark Tuszynski, Director of Neural Repair, Department of Neuroscience, UC San Diego and the VA San Diego Healthcare System, said recent studies have shown new nerve cells grow about two millimeters (about .08 inch) a month. Thomas Gros, a graduate student at UC San Diego, working under the guidance of Tuszynski, is currently studying the nerve growth.

Scaling the device to match spinal cord injuries in humans does not appear to be an issue at this time. Although this technology clearly has demonstrated linear growth and guidance, the primary challenge will involve reestablishing nerve continuity through the spinal cord injury. "The new nerves may not exactly replace the connections of original nerves. However, the brain is expected to compensate by adapting to the new connections in a manner that can support functional improvement," said Jim Weiss, chief engineer for JPL's science division.

A paper accepted in February 2006 for publication in the journal Tissue Engineering, titled, "Templated Agarose Scaffolds Support Linear Axonal Regeneration," describes the process used to fabricate the device along with a detailed analysis of experiments demonstrating precision nerve guidance.

Advancements have been made since the collaboration started four years ago. JPL's Sakamoto makes approximately100 devices a year that are used in research labs. His expertise involves constructing extremely small 3-dimensional structures made from various organic and inorganic materials. A few of the structures are being used in energy research, to help scientists learn how to develop electrochemical technologies such as fuel cells and batteries for future space missions.

The Christopher Reeve Foundation donated the initial $60,000 to get the project started and the first prototypes of the device were developed at JPL within a year. The Christopher Reeve Foundation is dedicated to curing spinal cord injury by funding innovative research, and improving the quality of life for people living with paralysis. Current funding is being provided by the Veterans Administration.

This project is one of many demonstrating that NASA technology is applicable to life on Earth.

More information on the Veteran's Administration is available online at: http://www.san-diego.med.va.gov/

More information on the University of California, San Diego is available online at: http://www.ucsd.edu/

More information on the Christopher Reeve Foundation is available online at: www.christopherreeve.org