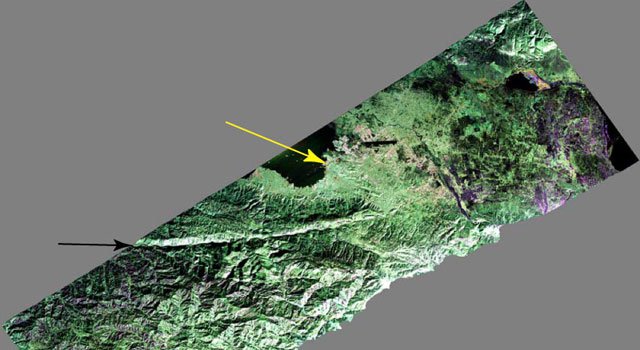 False-color composite image of the Port-au-Prince, Haiti region, taken Jan. 27, 2010 by NASA's UAVSAR airborne radar. The city is denoted by the yellow arrow; the black arrow points to the fault responsible for the Jan. 12 earthquake.› Larger view
Credit: NASA/JPL

JPL's Uninhabited Aerial Vehicle Synthetic Aperture Radar (UAVSAR) captured this false-color composite image of the city of Port-au-Prince, Haiti, and the surrounding region on Jan. 27, 2010. Port-au-Prince is visible near the center of the image. The large dark line running east-west near the city is the main airport. UAVSAR left NASA's Dryden Flight Research Center in Edwards, Calif., Jan. 25, 2010, aboard a modified NASA Gulfstream III aircraft on a three-week campaign that will also take it to Central America.

Shortly before 5 p.m. local time on Jan. 12, 2010, a magnitude 7.0 earthquake struck southern Haiti. The earthquake's epicenter was about 25 kilometers (15 miles) west-southwest of Port-au-Prince, close to the west (left) edge of this image. The large linear east-west valley in the mountains south of the city is the location of the major active fault zone responsible for the earthquake: the Enriquillo-Plantain Garden fault. The fault extends from the western tip of Haiti past Port-au-Prince into the Dominican Republic to the east of this image. Historical records show that the southern part of Haiti was struck by a series of large earthquakes in the 1700s, and geologists believe those were also caused by ruptures on this fault zone.

Satellite interferometric synthetic aperture radar measurements show that the Jan. 12 earthquake ruptured a segment of the fault extending from the epicenter westward over a length of about 40 kilometers (25 miles), leaving the section of the fault in this image unruptured. The earthquake has increased the stress on this eastern section of the fault south of Port-au-Prince and the section west of the rupture. This has significantly increased the risk of a future earthquake, according to a recent report by the U.S. Geological Survey.

The colors in the image reflect the three different UAVSAR radar polarizations: HH (horizontal transmit, horizontal receive) is colored red; VV (vertical transmit, vertical receive) is colored blue; and HV (horizontal transmit, vertical receive) is colored green. Like a pair of Polaroid sunglasses, these images are sensitive to different parts of the radar signal that is reflected back from Earth's surface. The HV polarization is sensitive to multiple scattering that typically occurs in vegetation – this gives the hills a green color. VV polarization is sensitive to scattering from surfaces – this gives a bluish tint to water and non-vegetated soil. Finally, HH polarization is sensitive to structures and vertical tree trunks – this gives some urban areas and vegetated regions a reddish tint. The image is roughly 20 kilometers (12.5 miles) wide in the northwest-southeast direction. North is up and radar illumination is from the southeast.

This image will be combined with other images of the same area to be acquired later this month and in the future in order to measure the motion of Earth's surface during the time between images using a technique called interferometry.The interferometric measurements will allow scientists to study the pressures building up and being released on the fault at depth.

UAVSAR is a reconfigurable polarimetric L-band synthetic aperture radar (SAR) specifically designed to acquire airborne repeat track SAR data for differential interferometric measurements. For more information about radar polarimetry, see http://www.ccrs.nrcan.gc.ca/resource/tutor/polarim/index_e.php . The radar will eventually be flown aboard an uninhabited, remotely-piloted aircraft such as the Northrop Grumman Global Hawk. The radar was built at JPL with funding by NASA's Earth Science Technology Office. UAVSAR is managed and operated by JPL under contract with NASA's Science Mission Directorate, Washington, D.C.

For more information on the U.S. Geological Survey report on the Haiti earthquake, see: http://pubs.usgs.gov/of/2010/1019/ .

For more information on other interferometric studies of the Haiti earthquake, see: http://www-radar.jpl.nasa.gov/CrustalDef/haiti .