It's Never 'Groundhog Day' at Jupiter 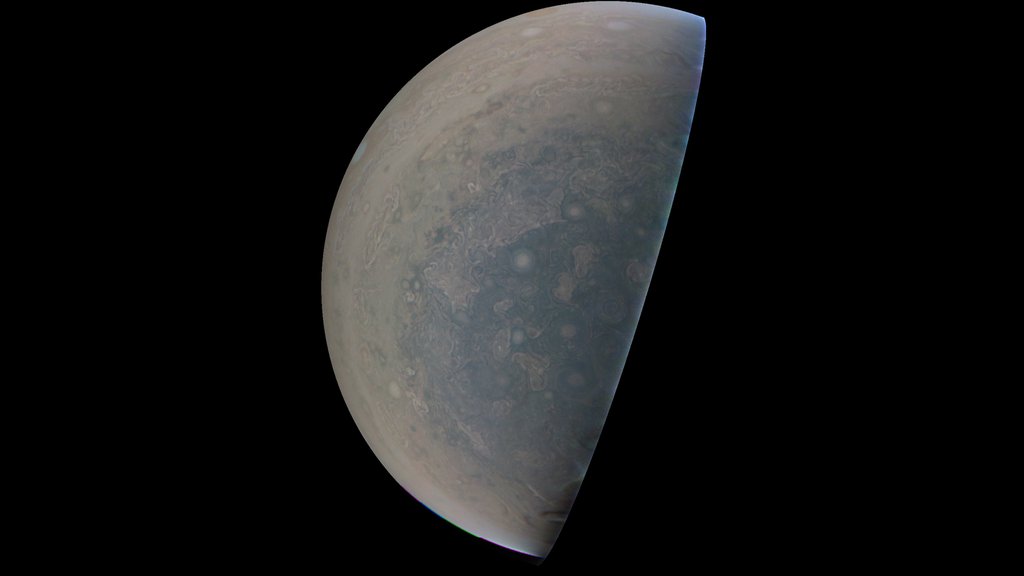 Cyclones swirl around the south pole, and white oval storms can be seen near the limb -- the apparent edge of the planet -- in this image of Jupiter's south polar region taken by the JunoCam imager aboard NASA's Juno spacecraft.› Full image and caption
Credit: NASA/JPL-Caltech/SwRI/MSSS

NASA's Juno mission completed a close flyby of Jupiter on Thursday, Feb. 2, its latest science orbit of the mission.

All of Juno's science instruments and the spacecraft's JunoCam were operating during the flyby to collect data that is now being returned to Earth. Juno is currently in a 53-day orbit, and its next close flyby of Jupiter will occur on March 27, 2017.

At the time of closest approach (called perijove), Juno will be about 2,670 miles (4,300 kilometers) above the planet's cloud tops and traveling at a speed of about 129,000 mph (57.8 kilometers per second) relative to the gas giant. All of Juno's eight science instruments, including the Jovian Infrared Auroral Mapper (JIRAM) instrument, will be on and collecting data during the flyby.

"Tomorrow may be 'Groundhog Day' here on Earth, but it's never Groundhog Day when you are flying past Jupiter," said Scott Bolton, principal investigator of Juno from the Southwest Research Institute in San Antonio. "With every close flyby we are finding something new."

The Juno science team continues to analyze returns from previous flybys. Revelations include that Jupiter's magnetic fields and aurora are bigger and more powerful than originally thought and that the belts and zones that give the gas giant's cloud top its distinctive look extend deep into the planet's interior. Peer-reviewed papers with more in-depth science results from Juno's first three flybys are expected to be published within the next few months. Also, JunoCam, the first interplanetary outreach camera, is now being guided with the assistance from the public -- people can participate by voting for what features on Jupiter should be imaged during each flyby.

Information about JunoCam voting is available at:

Juno is currently in a 53-day orbit period around Jupiter as the team evaluates options for performing a maneuver to get the spacecraft into a shorter orbit period. While the initial plan was for the mission was to have 14-day orbits during this time, Juno can reveal amazing details about Jupiter even if it stays in the longer orbits for the duration of the mission.

Juno launched on Aug. 5, 2011, from Cape Canaveral, Florida, and arrived at Jupiter on July 4, 2016. During its mission of exploration, Juno soars low over the planet's cloud tops -- as close as about 2,600 miles (4,100 kilometers). During these flybys, Juno is probing beneath the obscuring cloud cover of Jupiter and studying its auroras to learn more about the planet's origins, structure, atmosphere and magnetosphere.