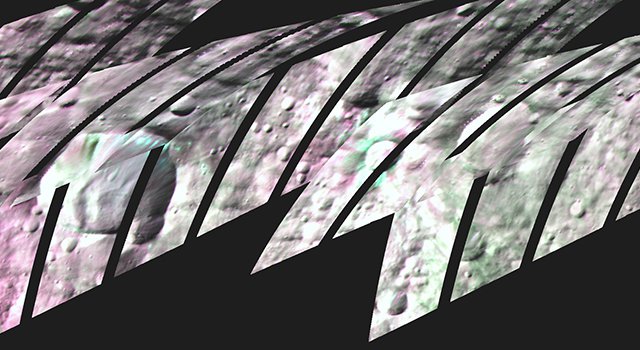 This image shows infrared views of two craters at the giant asteroid Vesta that NASA's Dawn mission has found to sport the mineral olivine.› Full image and caption
Credit: NASA/JPL-Caltech/UCLA/ASI/INAF

This colorized map from NASA's Dawn mission shows the types of rocks and minerals distributed around the surface of the giant asteroid Vesta.› Full image and caption 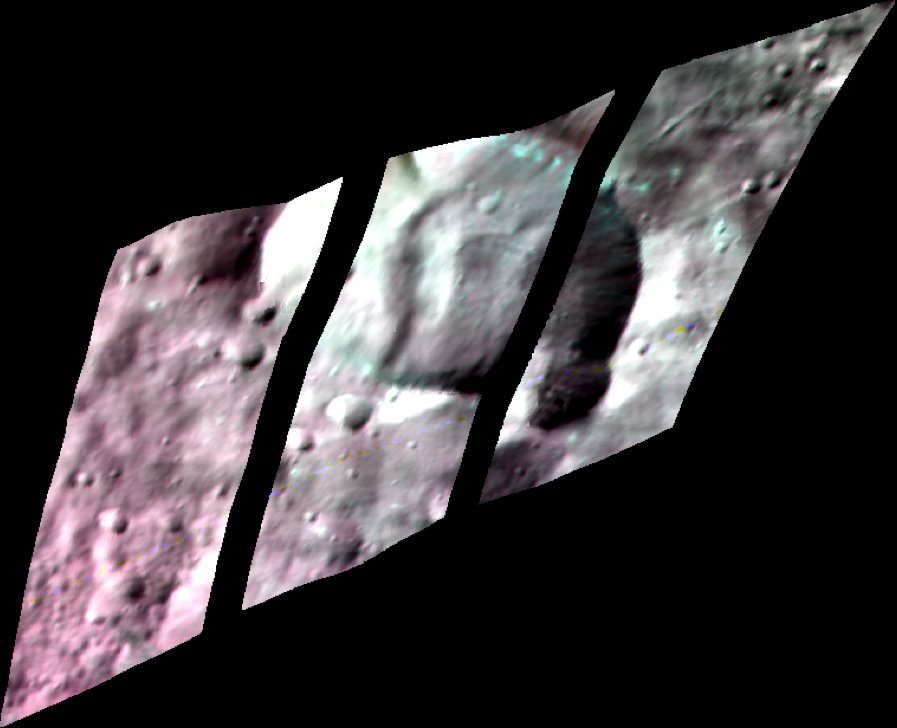 In this contrast-enhanced infrared image of Bellicia Crater on the giant asteroid Vesta, scientists from NASA's Dawn mission can see signs of the mineral olivine.› Full image and caption
Credit: NASA/JPL-Caltech/UCLA/ASI/INAF

A new analysis of data from NASA's Dawn mission suggests the story of Vesta's formation isn't as simple as scientists thought.

Just when scientists thought they had a tidy theory for how the giant asteroid Vesta formed, a new paper from NASA's Dawn mission suggests the history is more complicated.

However, as described in a paper in this week's issue of the journal Nature, that's not what Dawn's visible and infrared mapping spectrometer (VIR) instrument found. The observations of the huge craters in Vesta's southern hemisphere that exposed the lower crust and should have excavated the mantle did not find evidence of olivine there. Scientists instead found clear signatures of olivine in the surface material in the northern hemisphere.

"The lack of pure olivine in the deeply excavated basins in Vesta's southern hemisphere and its unexpected discovery in the northern hemisphere indicate a more complex evolutionary history than inferred from models of Vesta before Dawn arrived," said Maria Cristina De Sanctis, Dawn co-investigator and VIR leader at the National Institute for Astrophysics in Rome, Italy.

Perhaps Vesta only underwent partial melting, which would create pockets of olivine rather than a global layer. Perhaps the exposed mantle in Vesta's southern hemisphere was later covered by a layer of other material, which prevented Dawn from seeing the olivine below it.

"These latest findings from Dawn stimulate us to test some different ideas about Vesta's origin," said Carol Raymond, Dawn's deputy principal investigator at NASA's Jet Propulsion Laboratory, Pasadena, Calif. "They also show us what additional information we can learn by going into orbit around places like Vesta to complement the bits that come to us as meteorites or observations from long distances."

Dawn is currently cruising toward its second destination, the dwarf planet Ceres, which is the biggest member of the main asteroid belt between Mars and Jupiter. It will arrive at Ceres in early 2015.

The Dawn mission to Vesta and Ceres is managed by JPL for NASA's Science Mission Directorate, Washington, D.C. It is a project of the Discovery Program managed by NASA's Marshall Space Flight Center, Huntsville, Ala. UCLA is responsible for overall Dawn mission science. Orbital Sciences Corporation of Dulles, Va., designed and built the Dawn spacecraft. The visible and infrared mapping spectrometer was provided by the Italian Space Agency and is managed by Italy's National Institute for Astrophysics, Rome, in collaboration with Selex Galileo, where it was built.