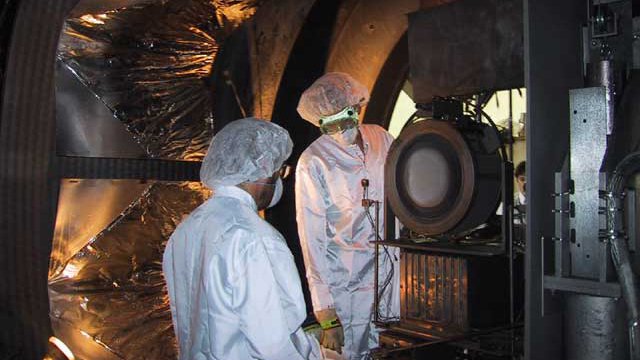 The future is here for spacecraft propulsion and the trouble-free engine performance that every vehicle operator would like, achieved by an ion engine running for a record 30,352 hours at NASAs Jet Propulsion Laboratory, Pasadena, Calif.

The future is here for spacecraft propulsion and the trouble-free engine performance that every vehicle operator would like, achieved by an ion engine running for a record 30,352 hours at NASA's Jet Propulsion Laboratory, Pasadena, Calif.

The engine is a spare of the Deep Space 1 ion engine used during a successful technology demonstration mission that featured a bonus visit to comet Borrelly. It had a design life of 8,000 hours, but researchers kept it running for almost five years, from Oct. 5, 1998, to June 26, 2003, in a rare opportunity to fully observe its performance and wear at different power levels throughout the test. This information is vital to future missions that will use ion propulsion, as well as to current research efforts to develop improved ion thrusters.

"Finding new means to explore our solar system - rapidly, safely and with the highest possible return on investment - is a key NASA mission," said Colleen Hartman, head of Solar System Exploration at NASA Headquarters, Washington, D.C. "Robust in-space flight technologies such as ion propulsion are critical to this effort and will pioneer a new generation of discovery among our neighboring worlds."

While the engine had not yet reached the end of its life, the decision was made to terminate the test because near-term NASA missions using ion propulsion needed analysis data that required inspection of the different engine components. In particular, the inspection of the thruster's discharge chamber, where xenon gas is ionized, is critical for mission designers of the upcoming Dawn mission. Dawn, part of NASA's Discovery Program, will be launched in 2006 to orbit Vesta and Ceres, two of the largest asteroids in the solar system.

"The chamber was in good condition," said John Brophy, JPL's project element manager for the Dawn ion propulsion system. "Most of the components showed wear, but nothing that would have caused near-term failure."

Marc Rayman, former Deep Space 1 project manager, said, "There are many exciting missions into the solar system that would be unaffordable or truly impossible without ion propulsion. This remarkable test shows that the thrusters have the staying power for long duration missions."

Ion engines use xenon, the same gas used in photo flash tubes, plasma televisions and some automobile headlights. Deep Space 1 featured the first use of an ion engine as the primary method of propulsion on a NASA spacecraft. That engine was operated for 16,265 hours, the record for operating any propulsion system in space. Ion propulsion systems can be very lightweight, since they can run on just a few grams of xenon gas a day. While the thrust exerted by the engine is quite gentle, its fuel efficiency can reduce trip times and lower launch vehicle costs. This makes it an attractive propulsion system choice for future deep space missions.

"The dedicated work of NASA's Solar Electric Technology Application Readiness test team, led by JPL, continues to exemplify a commitment to engineering excellence," said Les Johnson, who leads the In-Space Propulsion Program at NASA's Marshall Space Flight Center, Huntsville, Ala. "This work, along with significant contributions from NASA's Glenn Research Center in Cleveland, will take NASA's space exploration to the next level."

NASA's next-generation ion propulsion efforts are led by the In-Space Propulsion Program, managed by the Office of Space Science at NASA Headquarters and implemented by the Marshall Center. The program seeks to develop advanced propulsion technologies that will help near and mid-term NASA science missions by significantly reducing cost, mass or travel times.

An image showing the thruster being removed from the vacuum chamber is available at http://photojournal.jpl.nasa.gov/catalog/PIA04668.

For more information on NASA and its programs, please see http://www.nasa.gov, http://www.jpl.nasa.gov, and http://www.msfc.nasa.gov.
Caption/image details