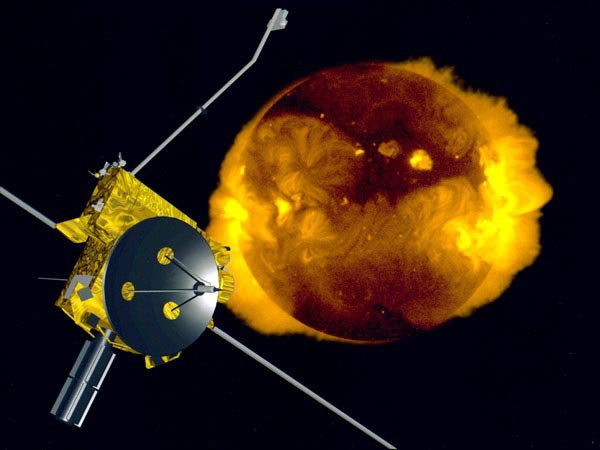 Ulysses, a joint NASA and European Space Agency mission to study the sun, will end on or about July 1, after 17 years of pioneering sun studies.

PASADENA, Calif. - After more than 17 years of pioneering solar science, a joint NASA and European Space Agency mission to study the sun will end on or about July 1.

The Ulysses spacecraft has endured for almost four times its expected lifespan. However, the spacecraft will cease operations because of a decline in power produced by its onboard generators. Ulysses has forever changed the way scientists view the sun and its effect on the surrounding space. Mission results and the science legacy it leaves behind were reviewed today at a media briefing at European Space Agency Headquarters in Paris.

"The main objective of Ulysses was to study, from every angle, the heliosphere, which is the vast bubble in space carved out by the solar wind," said Ed Smith, Ulysses project scientist at NASA's Jet Propulsion Laboratory, Pasadena, Calif. "Over its long life, Ulysses redefined our knowledge of the heliosphere and went on to answer questions about our solar neighborhood we did not know to ask."

Ulysses ends its career after revealing that the magnetic field emanating from the sun's poles is much weaker than previously observed.  This could mean the upcoming solar maximum period will be less intense than in recent history.

"Over almost two decades of science observations by Ulysses, we have learned a lot more than we expected about our star and the way it interacts with the space surrounding it," said Richard Marsden, Ulysses project scientist and mission manager for the European Space Agency (ESA). "Solar missions have appeared in recent years, but Ulysses is still unique today. Its special point of view over the sun's poles never has been covered by any other mission."

The spacecraft and its suite of 10 instruments had to be highly sensitive, yet robust enough to withstand some of the most extreme conditions in the solar system, including intense radiation while passing by the giant planet Jupiter's north pole. The encounter occurred while injecting the mission into its orbit over the sun's poles.

"Ulysses has been a challenging mission since launch," said Ed Massey, Ulysses project manager at JPL. "Its success required the cooperation and intellect of engineers and scientists from around the world."

Ulysses was the first mission to survey the environment in space above and below the poles of the sun in the four dimensions of space and time. It showed the sun's magnetic field is carried into the solar system in a more complicated manner than previously believed. Particles expelled by the sun from low latitudes can climb to high latitudes and vice versa, sometimes unexpectedly finding their way out to the planets. Ulysses also studied dust flowing into our solar system from deep space, and showed it was 30 times more abundant than astronomers suspected. In addition, the spacecraft detected helium atoms from deep space and confirmed the universe does not contain enough matter to eventually halt its expansion.

Ulysses collected and transmitted science data to Earth during its 8.6 billion kilometer journey (5.4 billion miles). As the power supply weakened during the years, engineers devised methods to conserve energy. The power has dwindled to the point where thruster fuel soon will freeze in the spacecraft's pipelines.

"When the last bits of data finally arrive, it surely will be tough to say goodbye," said Nigel Angold, ESA's Ulysses mission operations manager. "But any sadness I might feel will pale in comparison to the pride of working on such a magnificent mission. Although operations will be ending, scientific discoveries from Ulysses data will continue for years to come."

Ulysses was launched aboard space shuttle Discovery on Oct. 6, 1990. From Earth orbit, it was propelled toward Jupiter by solid-fuel rocket motors. Ulysses passed Jupiter on Feb. 8, 1992. The giant planet's gravity then bent the spacecraft's flight path downward and away from the ecliptic plane to place the spacecraft in a final orbit around the sun that would take it past our star's north and south poles.

The spacecraft was provided by ESA. NASA provided the launch vehicle and upper stage boosters. The U.S. Department of Energy supplied a radioisotope thermoelectric generator to provide power to the spacecraft. Science instruments were provided by both U.S. and European investigators. The spacecraft is operated from JPL by a joint NASA/ESA team. More information about the joint NASA/ESA Ulysses mission is available at http://ulysses.jpl.nasa.gov or http://www.esa.int/esaSC/SEMPEQUG3HF_index_0_ov.html .