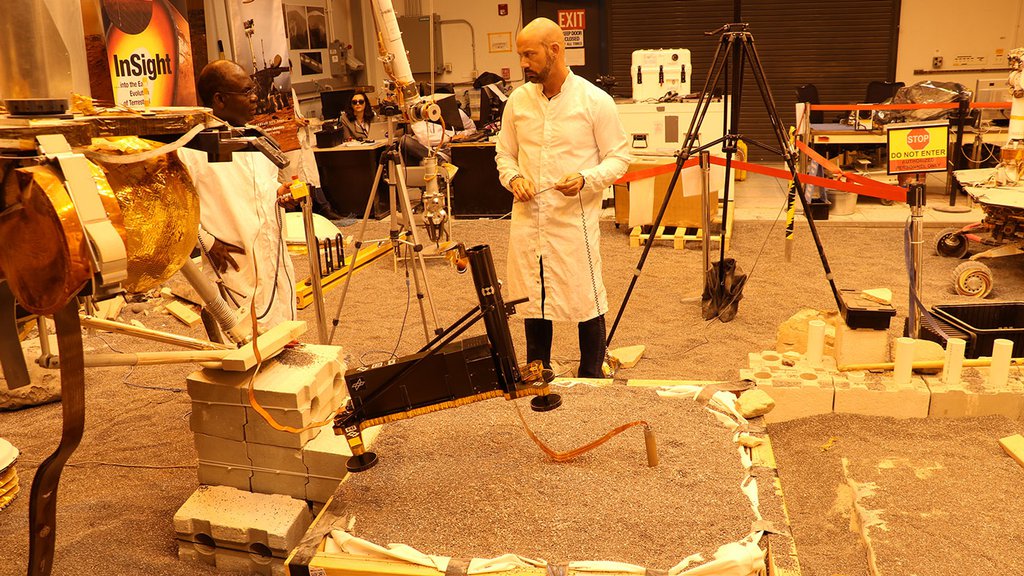 The robotic arm on NASA's Mars InSight lander moves in place over the Heat Flow and Physical Properties Package (HP3) and opens the fingers of its grapple in this series of images from June 1, 2019.› Full image and caption
Credit: NASA/JPL-Caltech 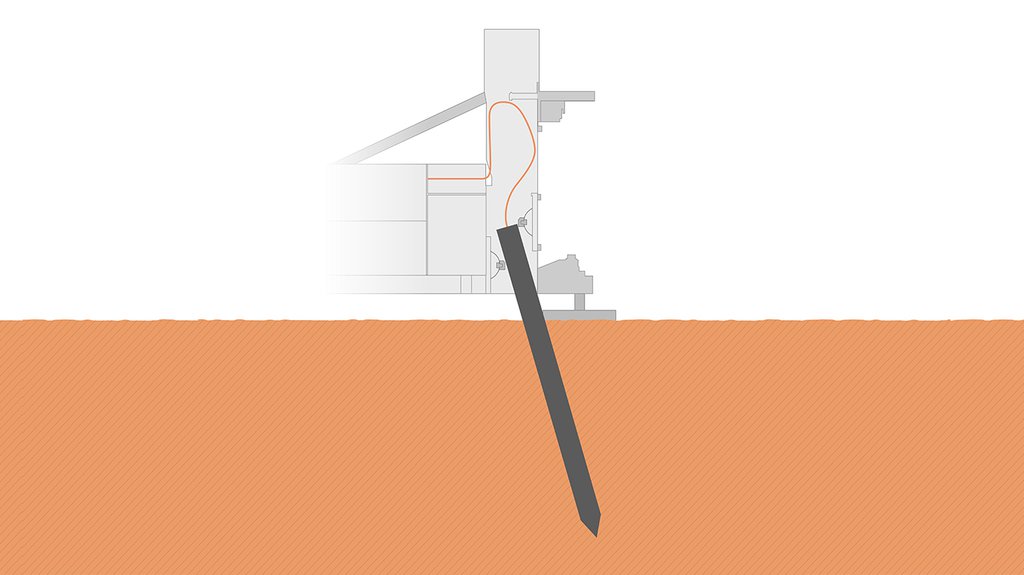 The self-hammering mole, part of the Heat Flow and Physical Properties Package (HP3) on NASA's InSight lander, was only partially buried in the soil of Mars as of early June 2019, as shown in this illustration.› Full image and caption
Credit: NASA/JPL-Caltech/DLR 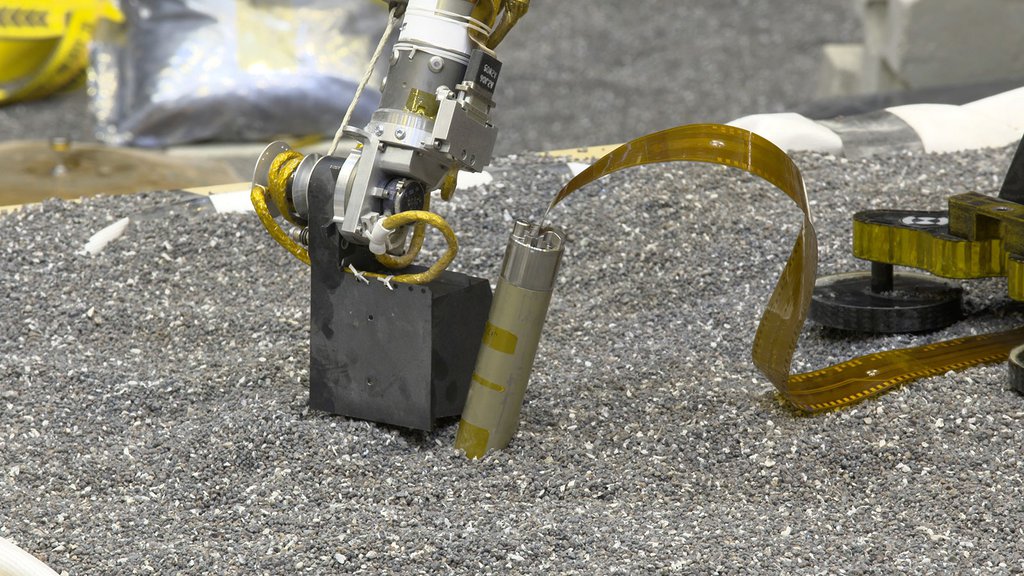 In a JPL lab, a replica of NASA InSight's robotic arm presses with its scoop on crushed garnet near a replica of the spacecraft's self-hammering "mole." Engineers believe pressing like this on Martian soil may help the mole dig by increasing friction of the surrounding soil.› Full image and caption
Credit: NASA/JPL-Caltech

The spacecraft's robotic arm will lift the heat probe's support structure, providing a better look at the instrument that has been trying to burrow into the Martian surface.

Scientists and engineers have a new plan for getting NASA InSight's heat probe, also known as the "mole," digging again on Mars. Part of an instrument called the Heat Flow and Physical Properties Package (HP3), the mole is a self-hammering spike designed to dig as much as 16 feet (5 meters) below the surface and record temperature.

But the mole hasn't been able to dig deeper than about 12 inches (30 centimeters) below the Martian surface since Feb. 28, 2019. The device's support structure blocks the lander's cameras from viewing the mole, so the team plans to use InSight's robotic arm to lift the structure out of the way. Depending on what they see, the team might use InSight's robotic arm to help the mole further later this summer.

HP3 is one of InSight's several experiments, all of which are designed to give scientists their first look at the deep interior of the Red Planet. InSight also includes a seismometer that recently recorded its first marsquake on April 6, 2019, followed by its largest seismic signal to date at 7:23 p.m. PDT (10:23 EDT) on May 22, 2019 - what is believed to be a marsquake of magnitude 3.0.

For the last several months, testing and analysis have been conducted at NASA's Jet Propulsion Laboratory in Pasadena, California, which leads the InSight mission, and the German Aerospace Center (DLR), which provided HP3, to understand what is preventing the mole from digging. Team members now believe the most likely cause is an unexpected lack of friction in the soil around InSight - something very different from soil seen on other parts of Mars. The mole is designed so that loose soil flows around it, adding friction that works against its recoil, allowing it to dig. Without enough friction, it will bounce in place.

"Engineers at JPL and DLR have been working hard to assess the problem," said Lori Glaze, director of NASA's Planetary Science Division. "Moving the support structure will help them gather more information and try at least one possible solution."

The lifting sequence will begin in late June, with the arm grasping the support structure (InSight conducted some test movements recently). Over the course of a week, the arm will lift the structure in three steps, taking images and returning them so that engineers can make sure the mole isn't being pulled out of the ground while the structure is moved. If removed from the soil, the mole can't go back in.

The procedure is not without risk. However, mission managers have determined that these next steps are necessary to get the instrument working again.

"Moving the support structure will give the team a better idea of what's happening. But it could also let us test a possible solution," said HP3 Principal Investigator Tilman Spohn of DLR. "We plan to use InSight's robotic arm to press on the ground. Our calculations have shown this should add friction to the soil near the mole."

A Q & A with team members about the mole and the effort to save it is at: