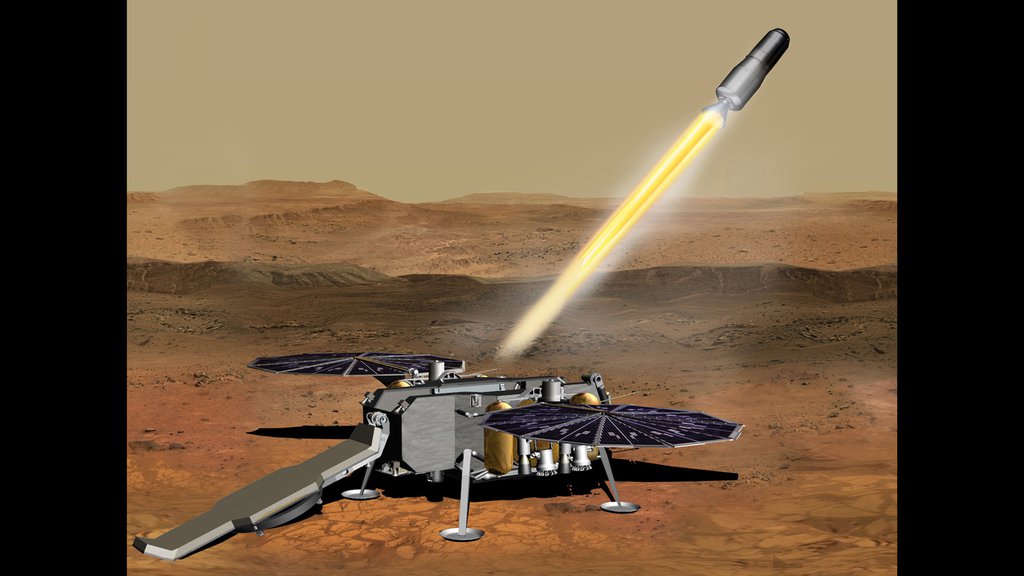 A report, released Tuesday, concludes that the agency is well positioned for its ambitious plan to bring samples back from the Red Planet for further study on Earth.

NASA released an independent review report Tuesday indicating the agency is well positioned for its Mars Sample Return (MSR) campaign to bring pristine samples from Mars to Earth for scientific study. The agency established the MSR Independent Review Board (IRB) to evaluate its early concepts for a groundbreaking, international partnership with ESA (European Space Agency) to return the first samples from another planet.

Following an examination of the agency's ambitious Mars Sample Return plan, the board's report concludes that NASA is prepared for the campaign, building on decades of scientific advancements and technical progress in Mars exploration.

The MSR campaign will require three advanced space vehicles. The first, NASA's Mars 2020 Perseverance rover, is more than halfway to Mars following launch in July. Aboard Perseverance is a sophisticated sampling system with a coring drill and sample tubes that are the cleanest hardware ever sent to space. Once on Mars, Perseverance aims to cache rock and regolith samples in its collection tubes. It then would leave some of them on the Martian surface for an ESA-provided "fetch" rover to collect and deliver to a NASA-provided Mars Ascent Vehicle, which then would launch the samples into orbit around Mars. An ESA-provided Earth Return Orbiter would then rendezvous with the samples in orbit around Mars and take them in a highly secure containment capsule for return to Earth in the 2030s.

"Mars Sample Return is something NASA needs to do as a leading member of the global community," said NASA Administrator Jim Bridenstine. "We know there are challenges ahead, but that's why we look closely at these architectures. And that's why in the end, we achieve the big accomplishments."

Sample return is a top priority of the National Academies' Planetary Science Decadal Survey for 2013-2022, and NASA has worked to mature the critical capabilities and overall MSR concept for the past three years. The board acknowledged the longstanding cooperation between NASA and ESA in robotic and human space exploration as an asset for the robust campaign and commended both agencies' early and in-depth analysis of MSR implementation approaches to inform future planning and development.

"NASA is committed to mission success and taking on great challenges for the benefit of humanity, and one way we do that is by ensuring we are set up to succeed as early as possible," said Thomas Zurbuchen, NASA associate administrator for science at the agency's headquarters in Washington. "I thank the members of this board for their many hours of work resulting in a very thorough review. We look forward to continued planning and mission formulation in close partnership with ESA. Ultimately, I believe this sample return will be well worth the effort - bringing us one step closer to our eventual goal of sending humans to Mars."

NASA initiated the IRB in mid-August to ensure the long-awaited mission is positioned for success. It is the earliest independent review of any NASA Science Mission Directorate large strategic mission. Historically, such reviews have not occurred until much later in the program development.

David Thompson, retired president and CEO of Orbital ATK, chaired the IRB, which comprised 10 experienced leaders from scientific and engineering fields. The board, which met during 25 sessions from August to October of this year, interviewed experts across NASA and ESA, as well as in industry and academia, and made 44 recommendations to address potential areas of concern regarding the program's scope and management, technical approach, schedule, and funding profile.

"The MSR campaign is a highly ambitious, technically demanding, and multifaceted planetary exploration program with extraordinary scientific potential for world-changing discoveries," said Thompson. "After a thorough review of the agency's planning over the past several years, the IRB unanimously believes that NASA is now ready to carry out the MSR program, the next step for robotic exploration of Mars."

The IRB found that NASA has developed a feasible concept and a broad set of architectural options to inform the planning of the MSR campaign over the next several years and recommends the MSR program proceed. It also highlighted the excellent progress the agency has achieved over the past several years and further emphasized the potential for this program to enable civilization-scale scientific discoveries underscoring that the technology is available now.

"The independent review has given strong support to MSR, which is great news for the campaign," says ESA's Director of Human and Robotic Exploration, David Parker. "It reinforces our shared vision to provide the world's scientists with pristine pieces of the Red Planet to study using laboratory tools and techniques that we could never take to Mars."

The IRB provided its findings and recommendations to NASA for consideration to better position the program for success. NASA has agreed to address and study all of the board's recommendations in the next year as it moves through early formulation efforts, well in advance of the agency's confirmation decision.

To read the full report, go to: