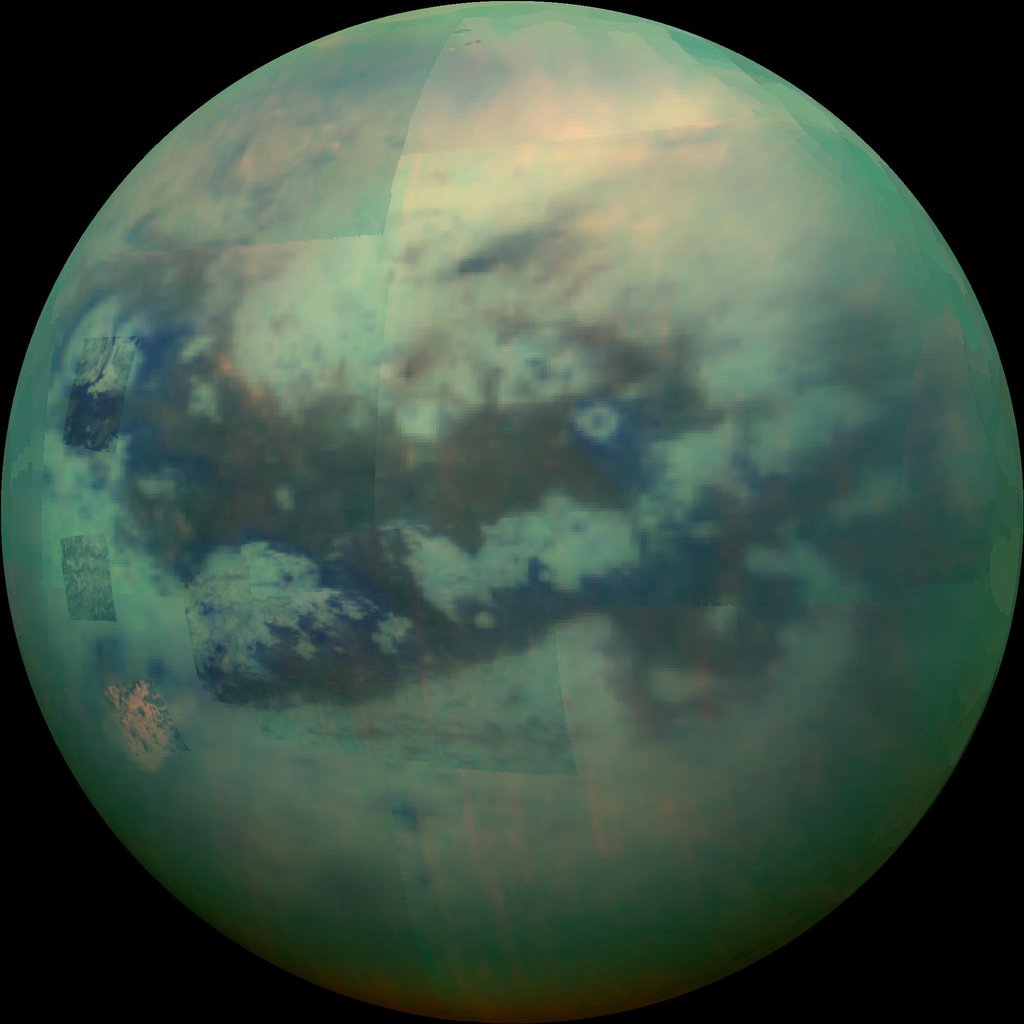 This view from NASA's Cassini spacecraft, acquired during the mission's 'T-114' flyby on Nov. 13, 2015, looks toward terrain that is mostly on the Saturn-facing hemisphere of Titan.
Credit: NASA/JPL/University of Arizona/University of Idaho
Full Image Details

New research on nine craters of Saturn's largest moon provides more details about how weathering affects the evolution of the surface - and what lies beneath.

Scientists have used data from NASA's Cassini mission to delve into the impact craters on the surface of Titan, revealing more detail than ever before about how the craters evolve and how weather drives changes on the surface of Saturn's mammoth moon.

Like Earth, Titan has a thick atmosphere that acts as a protective shield from meteoroids; meanwhile, erosion and other geologic processes efficiently erase craters made by meteoroids that do reach the surface. The result is far fewer impacts and craters than on other moons. Even so, because impacts stir up what lies beneath and expose it, Titan's impact craters reveal a lot.

The new examination showed that they can be split into two categories: those in the fields of dunes around Titan's equator and those in the vast plains at midlatitudes (between the equatorial zone and the poles). Their location and their makeup are connected: The craters among the dunes at the equator consist completely of organic material, while craters in the midlatitude plains are a mix of organic materials, water ice, and a small amount of methane-like ice.

From there, scientists took the connections a step further and found that craters actually evolve differently, depending on where they lie on Titan.

Some of the new results reinforce what scientists knew about the craters - that the mixture of organic material and water ice is created by the heat of impact, and those surfaces are then washed by methane rain. But while researchers found that cleaning process happening in the midlatitude plains, they discovered that it's not happening in the equatorial region; instead, those impact areas are quickly covered by a thin layer of sand sediment.

That means Titan's atmosphere and weather aren't just shaping the surface of Titan; they're also driving a physical process that affects which materials remain exposed at the surface, the authors found.

"The most exciting part of our results is that we found evidence of Titan's dynamic surface hidden in the craters, which has allowed us to infer one of the most complete stories of Titan's surface evolution scenario to date," said Anezina Solomonidou, a research fellow at ESA (European Space Agency) and the lead author of the new study. "Our analysis offers more evidence that Titan remains a dynamic world in the present day."

The new work, published recently in Astronomy & Astrophysics, used data from visible and infrared instruments aboard the Cassini spacecraft, which operated between 2004 and 2017 and conducted more than 120 flybys of the Mercury-size moon.

"Locations and latitudes seem to unveil many of Titan's secrets, showing us that the surface is actively connected with atmospheric processes and possibly with internal ones," Solomonidou said.

Scientists are eager to learn more about Titan's potential for astrobiology, which is the study of the origins and evolution of life in the universe. Titan is an ocean world, with a sea of water and ammonia under its crust. And as scientists look for pathways for organic material to travel from the surface to the ocean underneath, impact craters offer a unique window into the subsurface.

The new research also found that one impact site, called Selk Crater, is completely covered with organics and untouched by the rain process that cleans the surface of other craters. Selk is in fact a target of NASA's Dragonfly mission, set to launch in 2027; the rotorcraft-lander will investigate key astrobiology questions as it searches for biologically important chemistry similar to early Earth before life emerged.

NASA got its first close-up encounter with Titan some 40 years ago, on Nov. 12, 1980, when the agency's Voyager 1 spacecraft flew by at a range of just 2,500 miles (4,000 kilometers). Voyager images showed a thick, opaque atmosphere, and data revealed that liquid might be present on the surface (it was - in the form of liquid methane and ethane), and indicated that prebiotic chemical reactions might be possible on Titan.

Managed by NASA's Jet Propulsion Laboratory in Southern California, Cassini was an orbiter that observed Saturn for more than 13 years before exhausting its fuel supply. The mission plunged it into the planet's atmosphere in September 2017, in part to protect moons that have the potential of holding conditions suitable for life.

The Cassini-Huygens mission is a cooperative project of NASA, ESA, and the Italian Space Agency. JPL, a division of Caltech in Pasadena, manages the mission for NASA's Science Mission Directorate in Washington. JPL designed, developed, and assembled the Cassini orbiter.