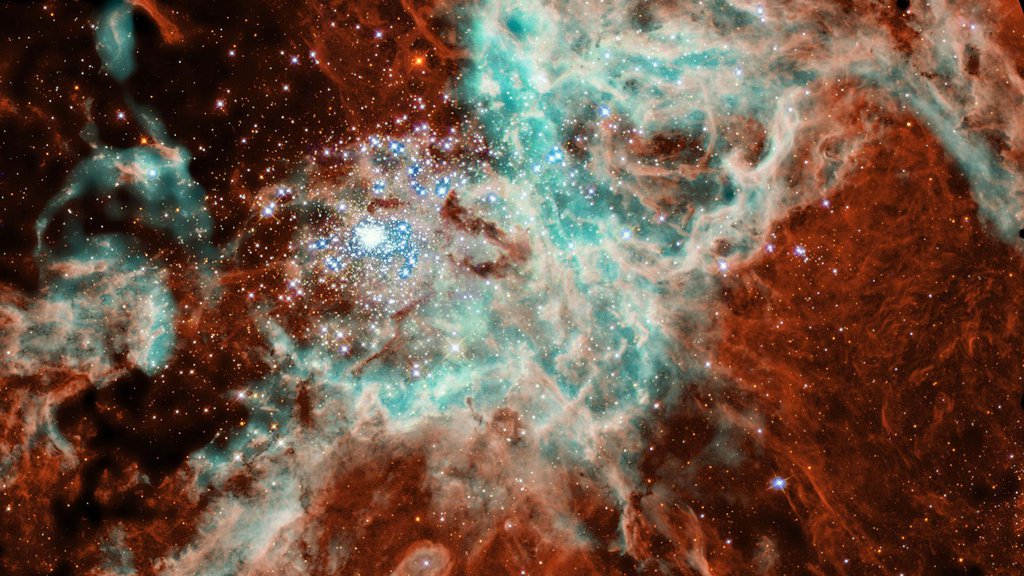 The image, taken by Hubble's Wide Field and Planetary Camera 2, is online at http://oposite.stsci.edu/pubinfo/pr/2001/21. The camera was designed and built by NASA's Jet Propulsion Laboratory, Pasadena, Calif.

The photo offers an unprecedented, detailed view of the entire inner region of the fertile, star-forming 30 Doradus Nebula. The mosaic picture shows that ultraviolet radiation and high-speed material unleashed by the stars in the cluster, called R136 (the large blue blob left of center), are weaving a tapestry of creation and destruction, triggering the collapse of looming gas and dust clouds and forming pillar-like structures that incubate newborn stars.

The 30 Doradus Nebula is in the Large Magellanic Cloud, a satellite galaxy of the Milky Way located 170,000 light-years from Earth. Nebulas like 30 Doradus are signposts of recent star birth. High-energy ultraviolet radiation from young, hot, massive stars in R136 causes surrounding gaseous material to glow. Previous Hubble telescope observations showed that R136 contains several dozen of the most massive stars known, each about 100 times the mass of the Sun and about 10 times as hot. These stellar behemoths formed about 2 million years ago.

The stars in R136 produce intense "stellar winds," streams of material traveling at several million miles an hour. These winds push the gas away from the cluster and compress the inner regions of the surrounding gas and dust clouds (seen in the image as the pinkish material). The intense pressure triggers the collapse of parts of the clouds, producing a new star formation around the central cluster. Most stars in the nursery are not visible because they are still encased in cocoons of gas and dust.

This mosaic image of 30 Doradus consists of five overlapping pictures taken between January 1994 and September 2000 by the Wide Field and Planetary Camera 2. Several color filters enhance important details in the stars and the nebula. Blue corresponds to the hot stars. The greenish color denotes hot gas energized by the central cluster of stars. Pink depicts the glowing edges of the gas and dust clouds facing the cluster, which are being bombarded by winds and radiation. Reddish-brown represents the cooler surfaces of the clouds, which are not receiving direct radiation from the central cluster.

Additional information about the Hubble Space Telescope is at http://www.stsci.edu .