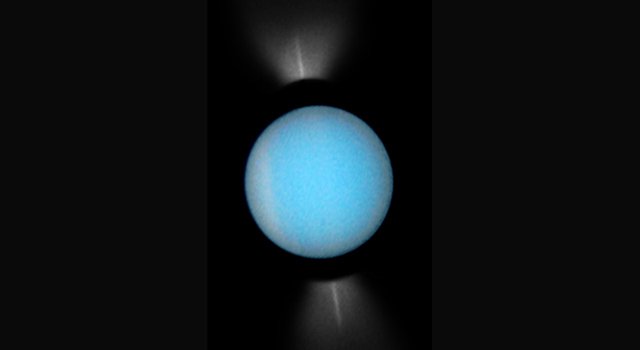 This image from NASA's Hubble Space Telescope shows how the ring system around the distant planet Uranus appears at ever more oblique (shallower) tilts as viewed from Earth - culminating in the rings being seen edge-on in three observing opportunities in 2007.

A rare image of the ring system of the planet Uranus has been captured by NASA's Hubble Space Telescope, using the onboard JPL-built and designed Wide Field Planetary Camera 2.

A rare image of the ring system of the planet Uranus has been captured by NASA's Hubble Space Telescope, using the onboard JPL-built and designed Wide Field Planetary Camera 2.

The fainter outer rings appeared in 2003 Hubble images, but were not noticed there until they were seen in 2005 Hubble images, which prompted astronomers to analyze the previous ones more carefully. Uranus has a total of 13 dusty rings.

In the image, the edge-on rings appear as spikes above and below the planet. The rings cannot be seen running fully across the face of the planet because the bright glare of the planet has been blocked out in the Hubble photo. A small amount of residual glare appears as a fan-shaped image artifact, along with an edge between the exposure for the inner and outer rings.

Uranus is the 7th planet from the sun. Its diameter, without the rings, is about 51,000 kilometers (32,000 miles) at the equator. Additional images and information on the Hubble Space Telescope is online at http://hubblesite.org/news/ . The Hubble Space Telescope is a project of international cooperation between NASA and the European Space Agency. JPL is managed for NASA by the California Institute of Technology in Pasadena.