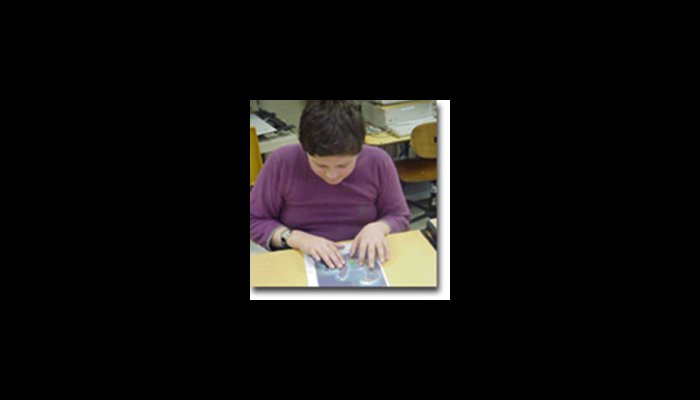 'These kind of feel like stalagmites in a cave,' explains Paul.

Students who are visually impaired now have a unique opportunity to touch the stars and experience some of NASA's spectacular discoveries.

Students who are visually impaired now have a unique opportunity to touch the stars and experience some of NASA's spectacular discoveries.

Majestic space images from NASA's Hubble Space Telescope, including those taken by the JPL-developed and built Wide Field and Planetary Camera 2, are part of a new Braille book that combines tactile illustrations with striking images of planets, star clusters and nebulae.

The book, "Touch the Universe: A NASA Braille Book of Astronomy," is the brainchild of Bernhard Beck-Winchatz, an astronomer and faculty member at DePaul University, Chicago, Ill.

Teaming up with astronomer and author Noreen Grice of Boston, Beck-Winchatz developed the book with a $10,000 Hubble Space Telescope grant for education programs. In 1999, Grice published "Touch The Stars," a book with touchable pictures based on drawings of constellations, comets, galaxies and other astronomical objects

To allow both blind and sighted readers to enjoy the Hubble images in "Touch the Universe," Grice developed clear tactile overlays for each image. The overlays were sent to Benning Wentworth, a science teacher and astronomy enthusiast at the Colorado School for the Deaf and the Blind in Colorado Springs. His students evaluated each image for clarity and provided important suggestions for needed changes.

The book is for middle school students, high school students, and adults alike, with and without sight. Four hundred copies will be printed in the first run, and the book will sell for slightly above production cost so earnings can offset future updates and production of a second edition. The project received grants for education from NASA's Office of Space Science, Washington, D.C.

Photos of students from the Colorado School for the Deaf and Blind examining images from "Touch the Universe". The California Institute of Technology in Pasadena manages JPL for NASA.