How to Target an Asteroid 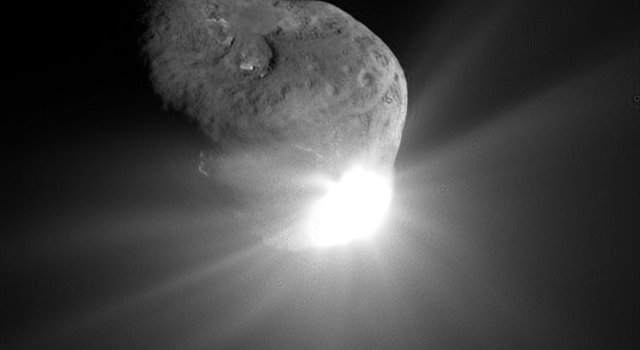 The hunt is on for methods to aim a spacecraft at an asteroid.

But while many of his coworkers are calculating asteroids' past, present and future locations in the cosmos, zapping them with the world's most massive radar dishes, or considering how to rendezvous and perhaps even gently nudge an asteroid into lunar orbit, Bhaskaran thinks about how to collide with one.

"If you want to see below the surface of an asteroid, there's no better way than smacking it hard," said Bhaskaran. "But it's not that easy. Hitting an asteroid with a spacecraft traveling at hypervelocity is like shooting an arrow at a target on a speeding race car."

The term hypervelocity usually refers to something traveling at very high speed -- two miles per second (6,700 mph / 11,000 kilometers per hour) or above. Bhaskaran's hypothetical impacts tend to be well above.

"Most of the hypervelocity impact scenarios that I simulate have spacecraft/asteroid closure rates of around eight miles a second, 30,000 miles per hour [about 48,000 kilometers per hour]," said Bhaskaran.

In the majority of our solar system, where yield signs and "right of way" statutes have yet to find widespread support, hypervelocity impacts between objects happen all the time. But all that primordial violence usually goes unnoticed here on Earth, and almost never receives scientific scrutiny.

"High-speed impacts on asteroids can tell you so many things that we want to know about asteroids," said Steve Chesley, a near-Earth object scientist at JPL. "They can tell you about their composition and their structural integrity -- which is how they hold themselves together. These are things that are not only vital for scientific research on the origins of the solar system, but also for mission designers working on ways to potentially move asteroids, either for exploitation purposes or because they may be hazardous to Earth."

Hypervelocity impacts by spacecraft are not just a hypothetical exercise. Scientists have taken the opportunity to analyze data from used spacecraft and rocket stages that have impacted the moon and other celestial bodies since the Apollo program. On July 4, 2005, NASA's Deep Impact spacecraft successfully collided its dynamic impactor with comet 9P/Tempel 1 -- it was the first hypervelocity impact of a primitive solar system body.

Bhaskaran, who was a navigator on Deep Impact, would be the first to tell you that not all hypervelocity impacts are created equal. "Impacting an asteroid presents slightly different challenges than impacting a comet," said Bhaskaran. "Comets can have jets firing material into space, which can upset your imaging and guidance systems, while potential asteroid targets can be as small as 50 meters [164 feeet] and have their own mini-moons orbiting them. Since they're small and dim, they can be harder to spot."

Along with the size of the celestial body being targeted, Bhaskaran also has to take into account its orbit, targeting errors, how hard an impact the scientists want, and even the shape.

"Asteroids hardly ever resemble perfect spheroids," said Bhaskaran. "What you've got floating around out there are a bunch of massive objects that look like peanuts, potatoes, diamonds, boomerangs and even dog bones -- and if the spacecraft's guidance system can't figure out where it needs to go, you can hit the wrong part of the asteroid, or much worse, miss it entirely."

The guidance system Bhaskaran is referring to is called "AutoNav," which stands for Autonomous Navigation. To reach out and touch something that could be halfway across the solar system and traveling at hypervelocity requires a fast-thinking and fast-maneuvering spacecraft. It is a problem that even the speed of light cannot cure. "When it comes to these high-speed impact scenarios, the best info you get on where you are and where you need to be comes very late in the game," said Bhaskaran. "That's why the last few hours before impact are so critical. We need to execute some final rocket burns, called Impactor Targeting Maneuvers (ITMs), quickly. With Earth so far away, there is no chance to send new commands in time.

"So, instead, we have AutoNav do the job for us. It is essentially a cyber-astronaut that takes in all the pertinent information, makes its own decisions and performs the actions necessary to make sure we go splat where we want to go splat."

Currently, Bhaskaran is running simulations that make his virtual impactor go splat against the furrowed, organic-rich regolith of asteroid 1999 RQ36. The 1,600-foot-wide (500-meter-wide) space rock is the target of a proposed JPL mission called the Impactor for Surface and Interior Science (ISIS). The impactor spacecraft, which looks a little like a rocket-powered wedding ring, would hitch a free ride into space aboard the rocket carrying NASA's InSight mission to Mars. The impactor's trajectory would then loop around Mars and bear down on RQ36.

"One of the things that helps me sleep at night is that we know a lot about RQ36 because it is the target of another NASA mission called OSIRIS-REx," said Bhaskaran. "But it also provides some challenges because the scientists want us to hit the asteroid at a certain moment in time and at a certain location, so that the OSIRIS-REx spacecraft can be sure to monitor the results from a safe vantage point. It is a challenge but it's also really exciting."

The part of the ISIS mission Bhaskaran is most interested in is what happens after our rocket-festooned, cyber-hero rounds Mars and begins to close the distance with the asteroid at a speed of 8.4 miles per second (49,000 kilometers per hour). Over the next several months, the mission navigators would plan and execute several deep space maneuvers that refine the spacecraft's approach. Then, with only two hours to go, AutoNav would take over to make the final orbital changes.

"AutoNav's imaging system and its orbit determination algorithms will detect the asteroid and compute its location in space relative to the impactor," said Bhaskaran. "Without waiting to hear from us, it will plan for and execute three ITMs at 90 minutes, 30 minutes and then three minutes out. That last rocket firing will occur when the asteroid is only 1,500 miles [2,400 kilometers] away. Three minutes later, if all goes according to plan, the spacecraft hits like a ton of bricks."

While Bhaskaran loves ISIS for the navigation challenge it provides, the proposed mission's principal investigator likes what the out-of-this-world equivalent of the release of nine tons of TNT does to the surface -- and interior -- of an asteroid.

"We expect the crater excavated by the impact of ISIS could be around 100 feet across," said Chesley. "From its catbird seat in orbit around the asteroid, OSIRIS-REx, at its leisure, would not only be able to determine how big a hole there is, but also analyze the material thrown out during the impact."

The data would not only provide information on what makes up the asteroid, but how its orbit reacts to being hit by a NASA spacecraft.

"While the effect of ISIS on the orbit of asteroid 1999 RQ36 will be miniscule, it will be measurable," said Chesley. "Once we know how its orbit changes, no matter how small, we can make better assessments and plans to change some future asteroid's orbit if we ever need to do so. Of course, to get all these great leaps forward in understanding, we have to hit it in the first place."

Which leads us back to Bhaskaran and his hard drive laden full of hypervelocity impact simulations.

"We have confidence that whenever called upon, AutoNav will do its job," said Bhaskaran. "The trick is, we just don't tell AutoNav it's a one-way trip."

Bhaskaran will present his latest findings on guidance for hypervelocity impacts on Tuesday, April 16, at the International Academy of Astronautics' Planetary Defense Conference in Flagstaff, Ariz.