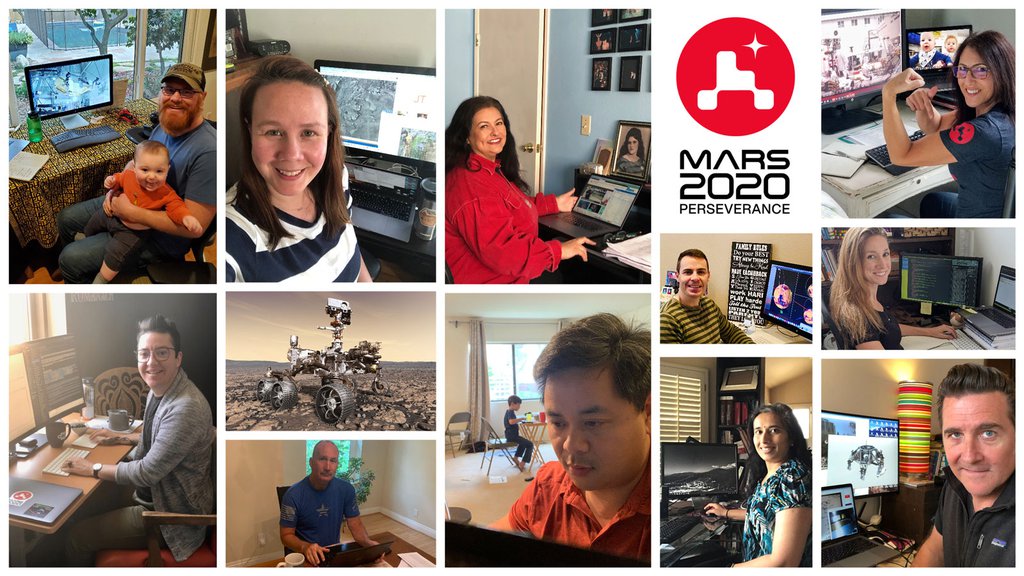 Like much of the rest of the world, the Mars rover team is pushing forward with its mission-critical work while putting the health and safety of their colleagues and community first.

From the moment the mission began in 2013, the women and men working on what would become NASA's Perseverance Mars rover knew they'd encounter unexpected challenges on their way to Mars. After all, no NASA mission to the surface of the Red Planet has done otherwise. But with its launch period opening on July 17, the team, like much of the rest of the world, is pushing forward with its mission-critical work while putting the health and safety of their colleagues and community first.

The mission has not paused because Mars won't, either. Owing to planetary alignment, the only time to launch a large payload to Earth's second closest planetary neighbor occurs just three weeks out of every 26 months. If Perseverance doesn't make it off the launch pad before the end of this launch opportunity, the project will have to wait until September 2022 to try again. Perseverance is the only NASA mission in the next several months with such an orbital constraint.

The women and men of Perseverance will tell you that their efforts pale in comparison to the inspiring work being performed by our frontline healthcare workers and first responders fighting COVID-19 across the globe. Like all of us, they worry about their families and communities.

However, by staying focused on the challenge at hand, preparation for the launch of Perseverance - humanity's first step in returning samples from another planet - remains on track. Getting to this point has required the team to be nimble, adhere to necessary health precautions, and gather support across the agency.

Based at NASA's Jet Propulsion Laboratory in Southern California, the project has transitioned 90% of the team to telework. In this new mode, the team has continued to mature its software, mission planning and operations procedures, and systems engineering readiness for launch. Like many Americans, they are persevering from home.

The team created a community page to share thoughts on best practices and provide moral support to each other. They've changed their meeting cadence, making time for "hallway conversations." They're also making time for "virtual walk-ins" and one-on-one virtual exchanges with project management.

But for some critical spacecraft tasks, a physical presence in a laboratory setting is required. Just last week at JPL, mission-essential staff successfully completed the assembly and cleaning of the sample tubes that will hold Martian sediment and rock for return to Earth on a future mission. Other mission-essential personnel will continue to go to the Lab for the foreseeable future, running assessments on critical rover systems and computer programs that must be completed before launch.

The Lab instituted a suite of safe@work procedures - based on the guidance of occupational safety medical personnel - to ensure those working on-Lab are social distancing, wearing protective equipment, and have ready access to hand sanitizer and other cleaning supplies. Limiting the number of personnel on-Lab to the minimal critical set has allowed the Mars 2020 Perseverance team to continue to focus on their work while the Lab's support network focuses on their safety.

Ian Clark walks past mission countdown clocks in the Perseverance offices at JPL. Clark was needed on-Lab to supervise the assembly and cleaning of the sample tubes that will hold Martian sediment and rock. Credit: NASA/JPL-Caltech
Full image and caption

"NASA has determined that Perseverance is the science program that has the agency's highest priority and the project has responded superbly to this challenge," said Michael Watkins, director of JPL. "When we realized the pandemic would affect Lab access, we were quick to define their chief objective as being workplace safety for team members and their families, and then built a plan around that providing the clearest path to the launch pad."

Another 80 mission-critical team members are performing final processing and checkout of the spacecraft components at Kennedy Space Center in central Florida. Adhering to strict cleanliness guidelines and working in personal protective equipment is second nature to this team, since they adhere to strict cleanliness protocols with all spacecraft going to Mars.

More challenging was figuring out how key personnel could travel from Southern California to Florida and back while minimizing their risk of exposure to coronavirus.

"These are people with a very special skillset - they know how to put all the pieces together," said JPL's Matt Wallace, deputy project manager for Perseverance. "While this team has done a remarkable job in a very difficult time for our nation and the world, we would not have been able to continue through this global emergency without the support of colleagues across the agency."

A great example of commitment to the agency mission is the critical work of personnel in the Flight Operations Office at NASA's Armstrong Flight Research Center in Edwards, California. The agency approved use of its C-20 aircraft at Armstrong for transport of mission-critical JPL staff from California.

"Getting the Perseverance team and gear safely where they need to go is just the latest in Armstrong's affiliation with Mars exploration," said Wayne Ringelberg, chief research pilot from NASA Armstrong. "We hosted Mars Exploration Rover evaluations at Roger's Lake in 2003, and in 2011 we tested the descent radar used on Curiosity's landing in 2012 as well as Perseverance's next year. "

Trips would begin at sunrise, with Armstrong's flight surgeon performing health screenings and protective equipment fittings. By sundown in Southern California, the aircraft crew would return home with team members whose work at the Cape was complete.

"We refer to it as One NASA," said Thomas Zurbuchen, associate administrator of the Science Mission Directorate. "It means any part of the agency and its 19 facilities will lend a hand and come together to push back the limits of technology and increase our knowledge of the universe. One of the best demonstrations of One NASA I've seen in a while is playing out right now with our Perseverance rover. Together we are persevering."

In addition to NASA, personnel from across the U.S. aerospace industry and the Department of Energy have performed critical activities in preparing Perseverance for launch.

While the direct flights have been indispensable, some members have not been able to take them, despite being essential to inspections.

"Just like a pilot does a preflight inspection before going up, we have a 'walkdown' of the spacecraft, where subject matter experts who are most intimate with the workings of a particular spacecraft system get one last chance to spot anything that might be wrong or could be made better," explained Wallace. "We would not launch without the ability to complete these inspections."

So the project's imaging scientist, Justin Maki, brought the spacecraft to them. Maki is an expert at obtaining pristine HD-quality images from the surface of Mars. Working with the JPL Communications and Public Engagement teams, who are well-versed with providing terrestrial footage, Maki and the clean room team in Florida set up a plan for the first live video walkdown of a Mars rover.

On March 31 and April 1, six Perseverance senior engineers watched from their home offices in Southern California as a technician in the rover's clean room at Kennedy maneuvered his smartphone into every accessible nook and cranny of the rover. The walkdown's crystal-clear video feed gave them the confidence that their part of Perseverance was ready to go.

A technician points a smartphone camera at NASA's Perseverance rover during an inspection - called a "walkdown" - at Kennedy Space Center in Florida. The imagery from the phone was seen live by mission engineers watching from their home offices in Southern California. The image was taken on March 31, 2020. Image Credit: NASA/JPL-Caltech
Full image and caption

"While we still have our sights set on Mars, our feet are firmly planted here on Earth," said NASA Administrator Jim Bridenstine. "We see the strain this pandemic is placing on our families, our healthcare workers and our livelihoods. We hope that when we leave Earth this summer, and when the Perseverance rover lands on Mars next February, our collective efforts to persevere through these challenging times will inspire the nation."

The Perseverance rover is a robotic scientist weighing about 2,260 pounds (1,025 kilograms). The rover's astrobiology mission will search for signs of past microbial life. It will characterize the planet's climate and geology, collect samples for future return to Earth, and pave the way for human exploration of the Red Planet. No matter what day Perseverance launches during its July 17-Aug. 5 launch period, it will land at Mars' Jezero Crater on Feb. 18, 2021.