How NASA's Mars Helicopter Will Reach the Red Planet's Surface

In this video clip, an engineer observes as a test of the Mars Helicopter Delivery System at Lockheed Martin Space in Denver on April 2019.
Credit: LMS 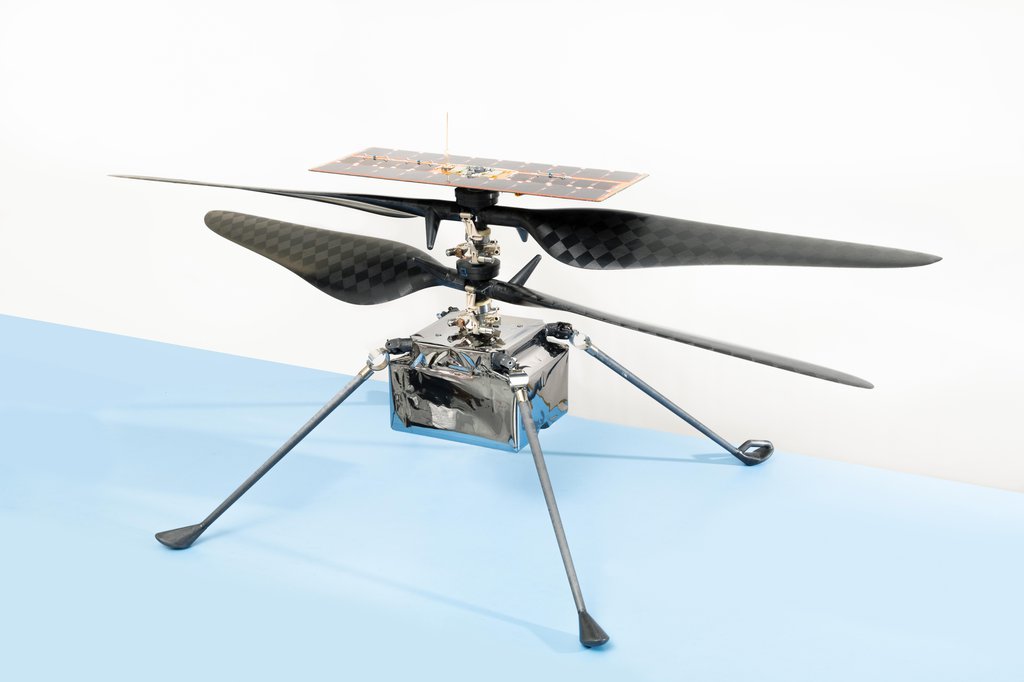 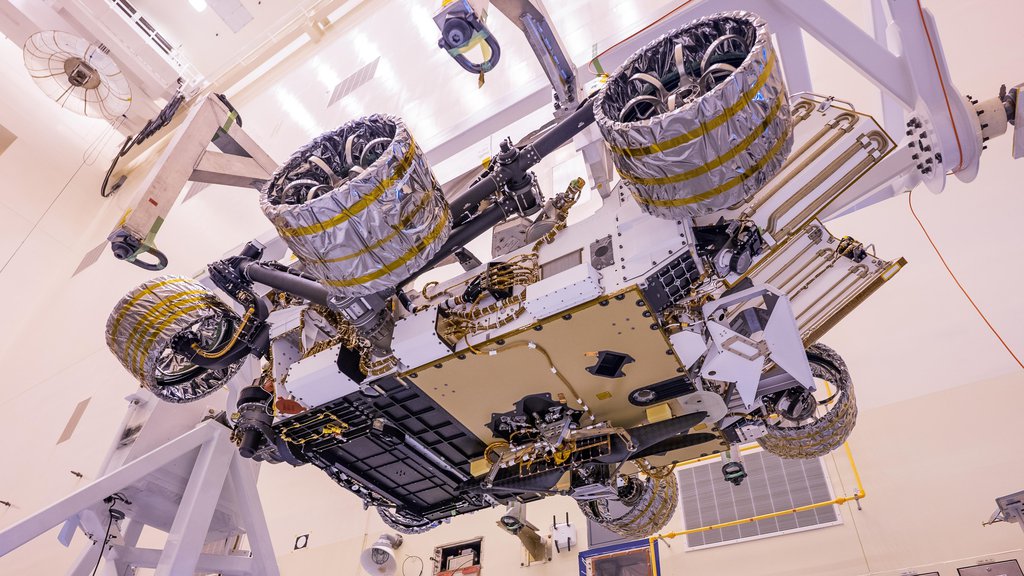 The Mars Helicopter, visible in lower center of the image, was attached to the belly of NASA's Perseverance rover at Kennedy Space Center on April 6, 2020.
Credit: NASA/JPL-Caltech
Full Image Details

The small craft will seek to prove that powered, controlled flight is possible on another planet. But just getting it onto the surface of Mars will take a whole lot of ingenuity.

NASA's Ingenuity Mars Helicopter will travel with the Perseverance rover through 314 million miles (505 million kilometers) of interplanetary space to get to Mars. But for the team working on the first experimental flight test on another planet, engineering the final 5 inches (13 centimeters) of the journey has been among the most challenging of all. To safely navigate those 5 inches - the distance Ingenuity will travel from where it's stowed on the rover to the surface of Mars - they came up with the ingenious Mars Helicopter Delivery System.

"Ingenuity is unlike any other helicopter ever built because powered controlled flight at Mars is unlike anything ever attempted," said MiMi Aung, project manager of the Mars Helicopter at NASA's Jet Propulsion Laboratory in Southern California. "And then we had to figure out how to hitch a ride and safely get deployed from the Mars 2020 Perseverance rover."

Ingenuity's square fuselage (which houses computers, cameras, batteries and the like) is about the size of a softball (7.9 by 6.3 by 5.5 inches, or 20 by 16 by 14 centimeters). But if you look outside the box, you'll find plenty of other important stuff - including an antenna, solar panel, landing legs and two rotors measuring 4 feet (1.2 meters) across - that makes stowing and deploying the helicopter a challenge. The entire package tips the scales at about 4 pounds (2 kilograms).

"On a Mars rover mission, the addition of even one new washer is usually worthy of debate," said Chris Salvo, the helicopter interface lead of the Mars 2020 mission at JPL. "The Ingenuity Mars Helicopter is a large, fragile, unique assemblage of hardware that is dissimilar to anything NASA has ever accommodated on a planetary mission."

Mission engineers considered every available parking space on the rover chassis for their unusual addition, including the robotic arm. They eventually landed on Perseverance's belly, which on a relatively flat stretch of Red Planet surface should offer about 26 inches (67 centimeters) of ground clearance. While that may seem like a lot of room (an Earthly SUV provides about a third of that), the delivery system reduces that distance by about 2 inches (6 centimeters). Ingenuity is about 19 inches (49 centimeters) tall. This is where the 5-inch journey comes in.

"That is not a lot of room to play with," said Salvo, "but we found if you attach the helicopter horizontally, there is enough to get the job done."

NASA's Ingenuity helicopter is traveling to Mars attached to the belly of the Perseverance rover and must safely detach to begin the first attempt at powered flight on another planet. Tests done at NASA's Jet Propulsion Laboratory and Lockheed Martin Space show the sequence of events that will bring the helicopter down to the Martian surface. Credit: NASA/JPL-Caltech and Lockheed Martin Space

How the Job Is Done

Ingenuity will be deployed about two months after Perseverance lands on Feb. 18, 2021. During early surface operations, both the rover and helicopter teams will be on the lookout for potential airfields - a 33-by-33-foot (10-by-10-meter) patch of Martian real estate that is comparatively flat, level, obstruction-free and viewable by Perseverance when the rover is parked about a football field away.

On around the 60th Martian day, or sol, of the mission, Perseverance will drop the Mars Helicopter Delivery System's graphite composite debris shield that protected the helicopter during landing. Then it will drive into the center of the chosen airfield. About six days later, after the helicopter and rover teams are satisfied everything is go, they'll command Mars Helicopter Delivery System to do its thing.

The deployment process begins with the release of a locking mechanism that keeps the helicopter in place. Then a cable-cutting pyrotechnic device fires, allowing a spring-loaded arm that holds the helicopter to begin rotating Ingenuity out of its horizontal position. Along the way, a small electric motor will pull the arm until it latches, bringing the helicopter body completely vertical with two of its spring-loaded landing legs deployed. Another pyrotechnic fires, releasing the other legs.

"And all the while, the deployment system has to maintain electrical and data cable connections between rover and helicopter until it's ready to drop," said David Buecher, deployment system manager at Lockheed Martin Space in Denver, which built the system. "While I have worked on my fair share of space-based deployment systems, this one was on another level."

If all goes well, mission controllers will command the delivery system to release, and Ingenuity will cover those last 5 inches. Once a good drop is confirmed, Perseverance will be commanded to drive away so the helicopter can begin recharging its batteries with its solar panel. At that point, the 30-sol clock on Ingenuity's flight test program begins.

The Ingenuity Mars Helicopter is an experimental flight test of new technology. Future Mars missions could enlist second-generation helicopters to add an aerial dimension to their explorations. They could act as scouts for human crews, carry small payloads or investigate cliffs, caves, deep craters and other unvisited or difficult-to-reach destinations. But before any of that happens, a test vehicle has to prove it's possible.

And before the test vehicle can do any of that, it has to land safely on the surface of Mars.

"Ingenuity needs Perseverance," said Aung. "The Mars Helicopter Delivery System is an ingenious gizmo and just one of the examples of how the Mars 2020 mission has worked above and beyond the call to accommodate our test project. Along with it and the helicopter, they had to incorporate an electronic base station and antenna dedicated entirely to helicopter operations into the rover. Our teams had to work closely together to make this complex system work. When Ingenuity flies, it will be an achievement we can all share."

Perseverance is a robotic scientist weighing about 2,260 pounds (1,025 kilograms). The rover's astrobiology mission will search for signs of past microbial life. It will characterize the planet's climate and geology, collect samples for future return to Earth, and pave the way for human exploration of the Red Planet. No matter what day Perseverance lifts off during its July 20-Aug. 11 launch period, it will land at Mars' Jezero Crater on Feb. 18, 2021.

For more information on the Mars Helicopter, go to: