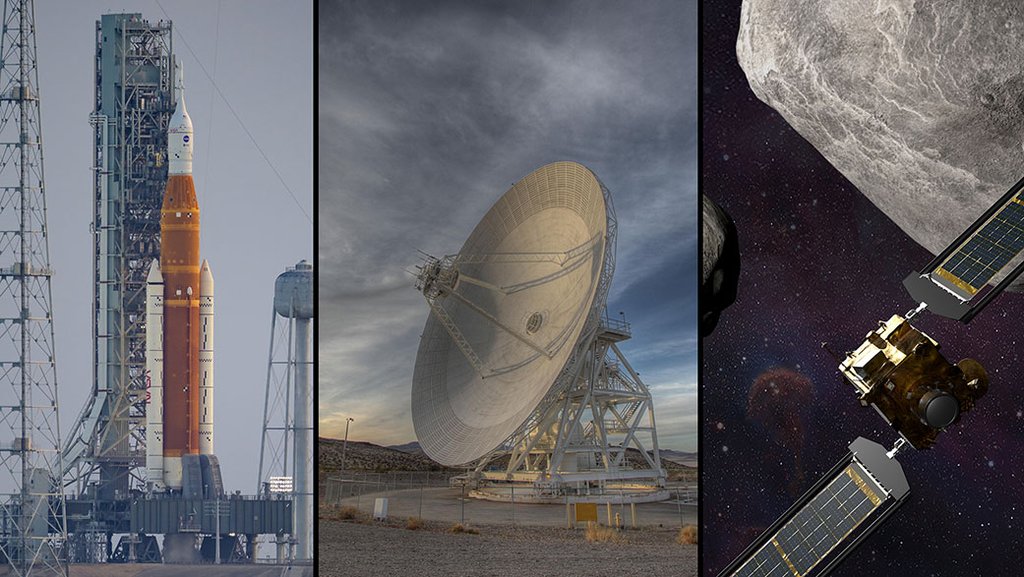 The DSN will prioritize communications during key mission events for Artemis I (pictured left), as it did for the approach and asteroid impact of the DART mission (illustrated right). Shown at center is one of the DSN’s antennas that supports dozens of other deep space missions.

The DSN will enable NASA to track and communicate with Artemis I while working to provide coverage across dozens of other missions throughout the solar system.

Over 50 years ago, NASA captured the world’s imagination and inspired generations with the Apollo 11 Moon landing. NASA’s then-young Deep Space Network (DSN) was crucial to tracking and communicating with that mission, as it will also be essential to NASA’s next push to the Moon: Artemis. In the half-century between those two lunar efforts, the network has expanded to support dozens of robotic spacecraft exploring the solar system, requiring complex coordination throughout the space agency.

Managed by NASA’s Jet Propulsion Laboratory in Southern California, with the oversight of NASA’s Space Communications and Navigation (SCaN) Program, the DSN will support a constant flow of data with Artemis I’s uncrewed Orion capsule beyond low-Earth orbit after launch. This includes the mission’s outbound journey and return, plus all the mission’s trajectory maneuvers in between, ensuring commands can be sent to the spacecraft and data can be returned to Earth.

The DSN will work in tandem with NASA’s Near Space Network, managed by NASA’s Goddard Space Flight Center in Greenbelt, Maryland, with the oversight of the SCaN Program. Together, the networks help to create a foundation for future crewed Artemis launches to the lunar surface.

To make sure the DSN can keep up with demand, it is undergoing a series of improvements to increase capacity. Also crucial to managing that demand, the network relies on a robust scheduling system to ensure the interplanetary switchboard can maximize coverage between so many missions. Schedulers with each mission negotiate with one another, working with DSN team members to make sure they will have network support for critical operations.

“There are different types of data that require different commitments, depending on what phase the mission is in,” said JPL’s Michael Levesque, DSN project manager. “Certain mission events, such as launches, landings, and planetary maneuvers, require constant contact with the DSN, so planning the network’s schedule typically begins 12 to 15 weeks ahead.”

Some missions – such as NASA’s Double Asteroid Redirection Test (DART) mission, which impacted the small asteroid Dimorphos in September – require transmitting a lot more data. The DART mission received round-the-clock DSN coverage surrounding the asteroid impact, with commands being transmitted to the spacecraft and data being sent back to Earth about the spacecraft’s health and the effects of the impact. “This can tie up DSN resources,” said Levesque, “but as the schedulers plan for events many months in advance, the effect on other missions can be well managed.”

You can check which spacecraft the Deep Space Network’s antennas are currently communicating with via the online application DSN Now. Click on a dish to learn more about the live connection between the spacecraft and the ground.

When urgent situations arise that throw off predetermined schedules, real-time discussions take place between missions to make adjustments. Demands on the network wax and wane, and there are other factors that can help make scheduling less complex. Should key mission events overlap, spacecraft may use onboard data storage and processing, allowing valuable science data to be transmitted at a later time, when communication demands are lower.

The network’s configuration also comes into play: The DSN consists of multiple giant antenna dishes arrayed in three complexes evenly spaced around the world at the Goldstone complex near Barstow, California; in Madrid, Spain; and in Canberra, Australia. This ensures they can trade off communicating with spacecraft to provide constant coverage as Earth rotates.

The forerunner to the DSN was established in 1958 when JPL was contracted by the U.S. Army to deploy portable radio tracking stations in California, Nigeria, and Singapore to receive telemetry of the first successful U.S. satellite, Explorer 1. Shortly after JPL was transferred to NASA later that year, the newly formed U.S. civilian space program established the DSN to communicate with all deep space missions. It has been in continuous operation since 1963 and remains the backbone of deep space communications for NASA and international missions.

JPL is a division of Caltech in Pasadena, California. The DSN and Near Space Network receive programmatic oversight from NASA’s Space Communications and Navigation (SCaN) program office within the Space Operations Mission Directorate at NASA Headquarters in Washington.

For more about the DSN, listen to the 2022 season of NASA’s Invisible Network Podcast. The SCaN Now app allows users to see which antennas are communicating with which spacecraft in real time.