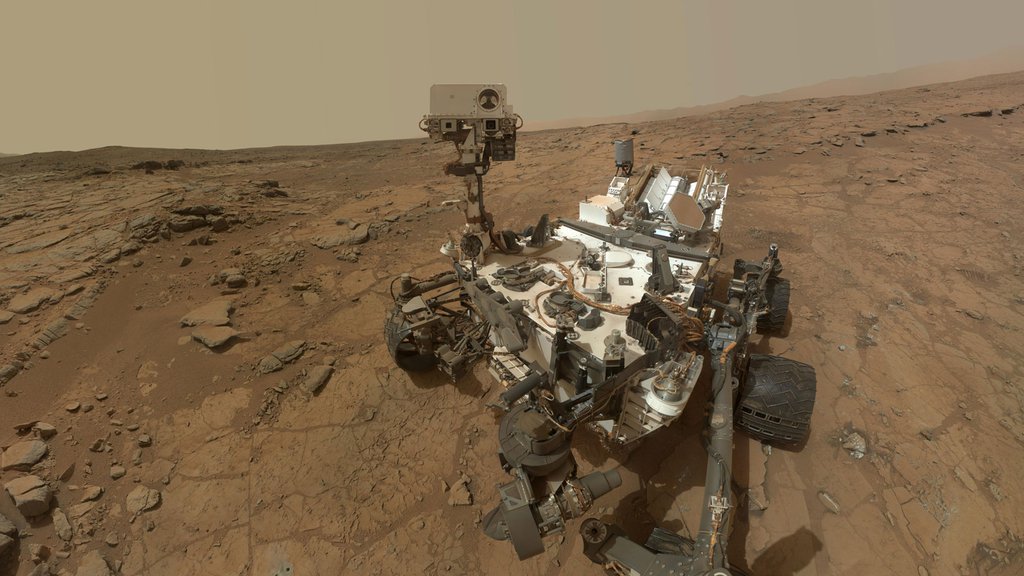 This self-portrait of NASA's Mars rover Curiosity combines dozens of exposures taken by the rover's Mars Hand Lens Imager (MAHLI) during the 177th Martian day, or sol, of Curiosity's work on Mars (Feb. 3, 2013), plus three exposures taken during Sol 270 (May 10, 2013) to update the appearance of part of the ground beside the rover.› Full image and caption
Credit: NASA/JPL-Caltech/MSSS

The team responsible for the Sample Analysis at Mars (SAM) instrument suite on NASA's Curiosity rover has made the first definitive detection of organic molecules at Mars.

The team responsible for the Sample Analysis at Mars (SAM) instrument suite on NASA's Curiosity rover has made the first definitive detection of organic molecules at Mars. Organic molecules are the building blocks of all known forms of terrestrial life, and consist of a wide variety of molecules made primarily of carbon, hydrogen, and oxygen atoms. However, organic molecules can also be made by chemical reactions that don't involve life, and there is not enough evidence to tell if the matter found by the team came from ancient Martian life or from a non-biological process. Examples of non-biological sources include chemical reactions in water at ancient Martian hot springs or delivery of organic material to Mars by interplanetary dust or fragments of asteroids and comets.

The surface of Mars is currently inhospitable to life as we know it, but there is evidence that the Red Planet once had a climate that could have supported life billions of years ago. For example, features resembling dry riverbeds and minerals that only form in the presence of liquid water have been discovered on the Martian surface. The Curiosity rover with its suite of instruments including SAM was sent to Mars in 2011 to discover more about the ancient habitable Martian environment by examining clues in the chemistry of rocks and the atmosphere.

The organic molecules found by the team were in a drilled sample of the Sheepbed mudstone in Gale crater, the landing site for the Curiosity rover. Scientists think the crater was once the site of a lake billions of years ago, and rocks like mudstone formed from sediment in the lake. Moreover, this mudstone was found to contain 20 percent smectite clays. On Earth, such clays are known to provide high surface area and optimal interlayer sites for the concentration and preservation of organic compounds when rapidly deposited under reducing chemical conditions.

While the team can't conclude that there was life at Gale crater, the discovery shows that the ancient environment offered a supply of reduced organic molecules for use as building blocks for life and an energy source for life. Curiosity's earlier analysis of this same mudstone revealed that the environment offered water and chemical elements essential for life and a different chemical energy source.

"We think life began on Earth around 3.8 billion years ago, and our result shows that places on Mars had the same conditions at that time - liquid water, a warm environment, and organic matter," said Caroline Freissinet of NASA's Goddard Space Flight Center in Greenbelt, Maryland. "So if life emerged on Earth in these conditions, why not on Mars as well?" Freissinet is lead author of a paper on this research submitted to the Journal of Geophysical Research-Planets.

The organic molecules found by the team also have chlorine atoms, and include chlorobenzene and several dichloroalkanes, such as dichloroethane, dichloropropane and dichlorobutane. Chlorobenzene is the most abundant with concentrations between 150 and 300 parts-per-billion. Chlorobenzene is not a naturally occurring compound on Earth. It is used in the manufacturing process for pesticides (insecticide DDT), herbicides, adhesives, paints and rubber. Dichloropropane is used as an industrial solvent to make paint strippers, varnishes and furniture finish removers, and is classified as a carcinogen.

In 1976, the Gas Chromatograph Mass Spectrometer instrument on NASA's Viking landers detected two simple chlorinated hydrocarbons after heating Martian soils for analysis (chloromethane and dichloromethane). However they were not able to rule out that the compounds were derived from the instrument itself, according to the team. While sources within the SAM instrument also produce chlorinated hydrocarbons, they don't make more than 22 parts-per-billion of chlorobenzene, far below the amounts detected in the mudstone sample, giving the team confidence that organic molecules really are present on Mars.

The SAM instrument suite was built at NASA Goddard with significant elements provided by industry, university, and national and international NASA partners.

For this analysis, the Curiosity rover sample acquisition system drilled into a mudstone and filtered fine particles of it through a sieve, then delivered a portion of the sample to the SAM laboratory. SAM detected the compounds using its Evolved Gas Analysis (EGA) mode by heating the sample up to around 1,600 degrees Fahrenheit (about 875 degrees Celsius) and then monitoring the volatiles released from the sample using a quadrupole mass spectrometer, which identifies molecules by their mass using electric fields. SAM also detected and identified the compounds using its Gas Chromatograph Mass Spectrometer (GCMS) mode. In this mode, volatiles are separated by the amount of time they take to travel through a narrow tube (gas chromatography - certain molecules interact with the sides of the tube more readily and thus travel more slowly) and then identified by their signature mass fragments in the mass spectrometer.

The first evidence for elevated levels of chlorobenzene and dichloroalkanes released from the mudstone was obtained on Curiosity Sol 290 (May 30, 2013) with the third analysis of the Cumberland sample at Sheepbed. The team spent over a year carefully analyzing the result, including conducting laboratory experiments with instruments and methods similar to SAM, to be sure that SAM could not be producing the amount of organic material detected.

"The search for organics on Mars has been extremely challenging for the team," said Daniel Glavin of NASA Goddard, a co-author on the paper. "First, we need to identify environments in Gale crater that would have enabled the concentration of organics in sediments. Then they need to survive the conversion of sediment to rock, where pore fluids and dissolved substances may oxidize and destroy organics. Organics can then be destroyed during exposure of rocks at the surface of Mars to intense ionizing radiation and oxidants. Finally, to identify any organic compounds that have survived, we have to deal with oxychlorine compounds and possibly other strong oxidants in the sample which will react with and combust organic compounds to carbon dioxide and chlorinated hydrocarbons when the samples are heated by SAM."

As part of Curiosity's plan for exploration, an important strategic goal was to sample rocks that represent different combinations of the variables thought to control organic preservation. "The SAM and Mars Science Laboratory teams have worked very hard to achieve this result," said John Grotzinger of the California Institute of Technology in Pasadena, Mars Science Laboratory's Project Scientist. "Only by drilling additional rock samples in different locations, and representing different geologic histories were we able to tease out this result. At the time we first saw evidence of these organic molecules in the Cumberland sample it was uncertain if they were derived from Mars, however, additional drilling has not produced the same compounds as might be predicted for contamination, indicating that the carbon in the detected organic molecules is very likely of Martian origin."

NASA provided support for the development and operation of SAM. SAM-Gas Chromatograph was supported by funds from the French Space Agency (CNES). Individual team members were supported by the NASA Postdoctoral Program and the Mars Science Laboratory Participating Scientist Program. Data from these SAM experiments are archived in the Planetary Data System (pds.nasa.gov).