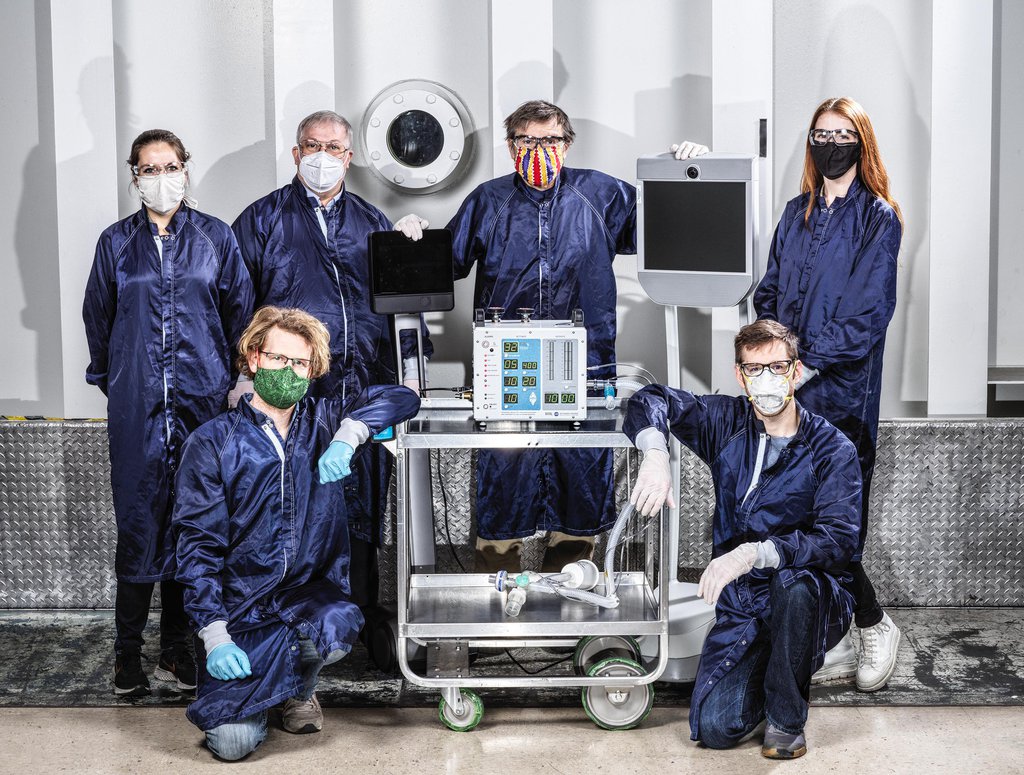 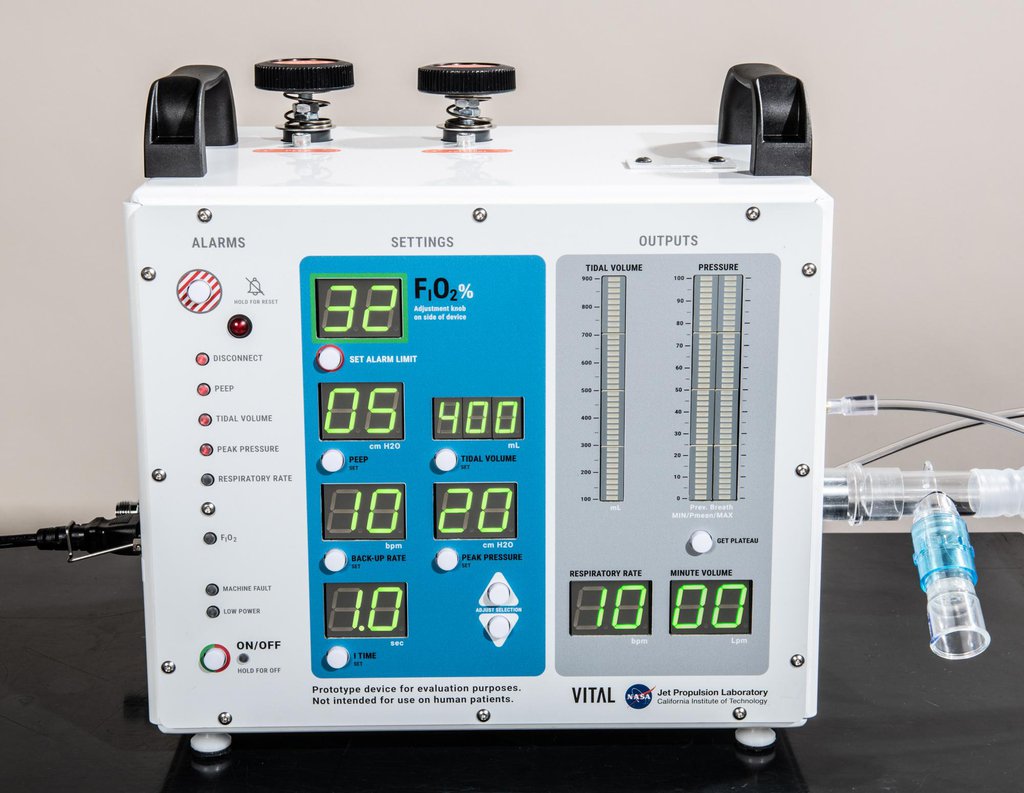 As coronavirus hit, JPL engineers teamed up to make a ventilator prototype that could be mass produced to fill a massive need. It's not rocket science; it's something more.

On April 30, the Food and Drug Administration approved VITAL for a ventilator Emergency Use Authorization. Developed in just 37 days by NASA's Jet Propulsion Laboratory in response to the coronavirus pandemic, VITAL (short for Ventilator Intervention Technology Accessible Locally) wouldn't replace current hospital ventilators, which can treat a broader range of medical issues.

Designed specifically for COVID-19 patients, the prototype is composed of far fewer parts than traditional ventilators and is intended to last three to four months. Its license is being offered free to manufacturers through the Office of Technology Transfer and Corporate Partnerships at Caltech, which manages JPL for NASA.

More than 100 manufacturers from around the world applied for a free license to build VITAL, and licensees will be announced later this month.

This is the story of how a team of engineers, fueled by a desire to help during the crisis, brought VITAL into being.

On March 11, Mechanical Systems Engineer David Van Buren found himself waiting in line for a cup of coffee at NASA's Jet Propulsion Laboratory in Southern California. It was a typical bustling Wednesday before mandatory teleworking kicked in, but Van Buren wasn't focused on his typical workload.

Instead, the mechanical systems engineer was crunching coronavirus numbers. In February, he'd given a lecture on pandemics in relation to COVID-19 for his physics course at Cal State Los Angeles, and he saw clear signs of a developing pandemic.

"It didn't take much extrapolating to see the potential of what could happen here," Van Buren said. "And at the same time, I was thinking about our work; we have these missions and efforts to explore other planets, but I started questioning if what we were doing at JPL was what we should be doing," Van Buren said.

That same morning, JPL Chief Engineer Rob Manning's thoughts were preoccupied by the virus, and he needed coffee, too.

"I had just seen some projections, and I was worried," Manning said.

In a chance encounter, the two chatted about upcoming work and a bit about their coronavirus concerns.

"I went back to my desk after talking with Rob, and the question was still nagging me," Van Buren said. "We have incredible engineering talent and capabilities here. How can we help reduce the ventilator shortage that could be coming?"

This, well before most people even knew the meaning of "ventilator," let alone the fatal implications of a shortage.

Van Buren sent an email, outlining a plan to develop and proof a low-cost respirator design that could be made quickly and in volume. Manning was hooked.

"We needed to do something, and this was it," Manning said.

Thirty-seven days later, a team of more than 50 - some working on-site at JPL, but most from home - had designed, built and tested VITAL, a breathing aid that would help critically ill COVID-19 patients and bolster scarce stocks of traditional hospital ventilators.

The timeline is a feat nearly unheard of in medical device development, completed by a research and development center that makes robots for space, not breathing aids for humans. In JPL terms, the team would say they crammed an entire planetary flight mission - from formulation to launch to landing - in a little more than a month. Most team members worked 14-hour days, seven days a week, and mandatory telework restrictions established on March 17 put unique strains on an already daunting task. Van Buren said the obstacles discouraged no one.

"The difference is the purpose," Van Buren said. "Landing something on Mars is incredibly exciting, but saving lives is a different beast."

So how did the team turn the initial idea into action?

Enter Leon Alkalai, manager of the JPL Office of Strategic Partnerships, who for the past six years has led a medical engineering forum at JPL aimed at identifying the Lab's unique space technologies that could be applied to solving challenging problems in healthcare and medicine.

"The broad vision has been there," Alkalai said. "David's idea brought the urgency and the opportunity for JPL to make a significant contribution in a unique way, and I wanted to help in any way I could."

The ventilator had to meet specific high-pressure oxygen flow rates to aid COVID-19 patients battling Acute Respiratory Distress Syndrome; it had to be made of far fewer parts than a typical hospital ventilator to keep costs down; those parts had to be widely available in the U.S. supply chain so the ventilators could be built in mass quantities; and those parts couldn't be the same used by traditional ventilators so manufacturing VITAL wouldn't block production of other ventilators.

Van Buren canvassed JPL for experts, and the team - now about a dozen or so strong - held its kickoff meeting Monday, March 16 in Left Field, a whiteboard-lined space typically used for brainstorming early mission concepts. The team had turned the room into a ventilator learning station. And thanks to one world-renowned pulmonologist, the learning curve was about to get steep.

No Time to Breathe

As the Medical Director of the School of Respiratory Therapy for East Los Angeles and Santa Monica Colleges, Dr. Michael Gurevitch had access to a supply of ventilators, circuits, valves and filters he could bring to the Lab to give a crash course on what was needed to make a COVID-19-fighting device.

"Since coronavirus restrictions had shut down the colleges, the school leadership granted us access to grab just about anything we needed from their labs that would help aid JPL's project," Gurevitch said.

"They were amazing. They not only grasped the medical concepts and physiology," Gurevitch said, "but they understood how those requirements would interface with the mechanics of the device."

Called to the Lab in a Pandemic

While a majority of the team worked from home, a limited staff stayed on Lab as mission-essential to work on prototype assembly and testing.

Mechatronic engineer Michelle Easter worked as prototype logistics and hardware test lead for VITAL. "We were considering the FDA approval process on top of making sure each part we choose is available for mass production, and not just available, but available right now," Easter said. "This had to be technically excellent, and the parts had to be readily available. We're not used to that at JPL. If I'm working on a flight instrument and I want a part, I'll just give a company a 20-month lead time to custom build it. That's not an option here."

Despite the early growing pains, the team found their groove, designing, building and testing two different prototype models - one powered by a blower and another by a pneumatic system. Both contain about one-seventh the parts of a traditional ventilator, and both can deliver the high-pressure oxygen flows needed for COVID-19 patients while keeping the lungs slightly inflated even as they exhale - key for patients to stave off infections like pneumonia.

"It's been amazing to be a part of such a grassroots project, and watching it just explode in an organic way from those first meetings into these working prototypes," Easter said. "I joke that I've met all my new favorite coworkers from this project. Because everyone on this team has a big heart, and they're on this project because they want to make a difference. That pureness of intention is incredible. Everybody is all in for the good, and it just feels great."

Systems Engineer Stacey Boland is no stranger to JPL's penchant for acronyms and jargon, but as operations lead on VITAL, she was tasked with essentially writing a user manual for the device as it was being built.

"The medical professionals definitely have their own language," Boland said. "Different specialties within the healthcare profession even seem to have their own dialects - so there's been a fair amount of iteration and editing involved."

Boland's other job is working on the MAIA instrument (Multi-Angle Imager for Aerosols) - NASA's first time partnering with epidemiologists and health organizations to use satellite data to study human health. "In a given day, I'm talking to doctors, engineers, managers, visual strategists and sometimes also regulators," Boland said.

It uniquely qualified her for a position on VITAL. And while there were a lot of different points of view to try to reconcile, a sense of purpose prevailed. "We all talk. We all listen. We're all learning together. There's something beautiful and enabling in having a singular focus - there's a real unmet need and we're responding to it. There truly is a sense that we're all in this together."

With the prototypes built, Leon Alkalai connected the team with Dr. Matthew Levin at the Icahn School of Medicine at Mount Sinai in New York. On April 22, barely a month after the project began, the ventilator passed critical tests in the center's high-fidelity human simulation lab, performing under a wide variety of simulated patient conditions.

On April 30, after reviewing the 505-page submission, the FDA approved VITAL for a ventilator Emergency Use Authorization. The selection process for which companies would be granted a free license was underway.

The team's accomplishments have captured the world's attention as well. On April 23, NASA Administrator Jim Bridenstine held a media briefing where JPL Associate Director of Strategic Integration Dave Gallagher discussed the development of VITAL. Two days later, Gallagher was in the White House, showing off the ventilator to President Donald Trump.

For Van Buren, the congratulations go all around for the team, and beyond.

"The medical workers, the people knitting face masks, providing PPE for groups on the front lines ... the amount of compassion people are displaying while we are all trying to cope with this epidemic is really heartwarming."

What VITAL will mean to the world is yet unknown. Currently, ventilator usage remains below critical levels in the United States, but that doesn't mean VITAL won't be needed if coronavirus cases spike again in the future.

"It looks like we're near the peak in the U.S., but it could get worse as easily as it gets better," Van Buren said. "We won't know it's over until it's obvious we have beat it. No matter what happens, what we've shown through this project is a pathway to get important, time-sensitive work done. There will be another pandemic, and we're putting in place principles on how to attack them here."

It has the potential to save lives, but all who helped build it hope coronavirus numbers never swell to a place where hospital ventilator capacities are exhausted.