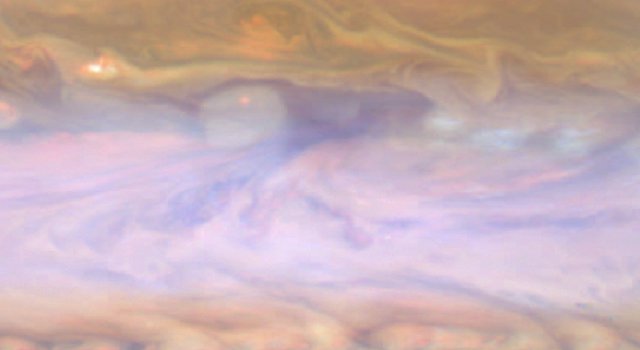 The dark hot spot in this false-color image from NASA's Cassini spacecraft is a window deep into Jupiter's atmosphere. All around it are layers of higher clouds, with colors indicating which layer of the atmosphere the clouds are in.› Full image and caption
Credit: NASA/JPL-Caltech/SSI/GSFC 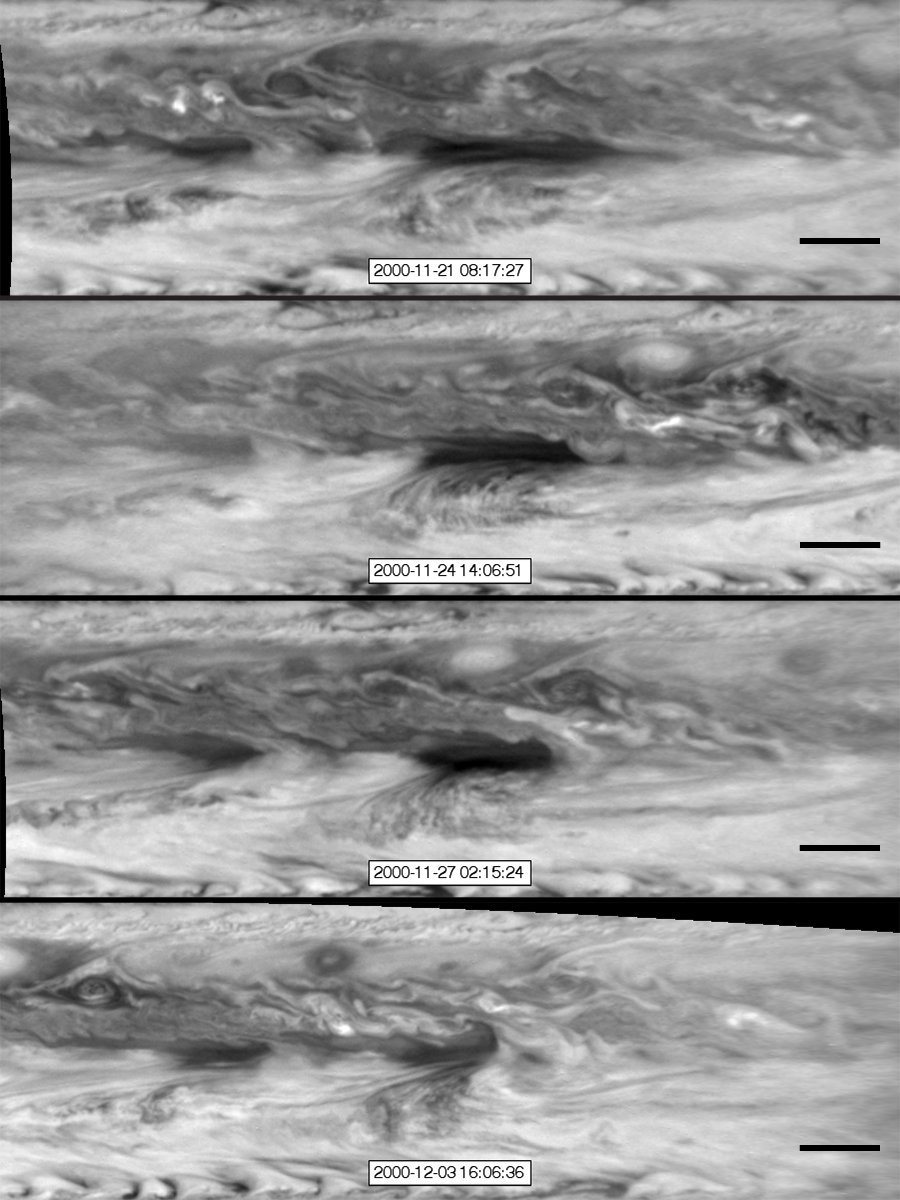 In this series of images from NASA's Cassini spacecraft, a dark, rectangular hot spot (top) interacts with a line of vortices that approaches from on the upper-right side (second panel).› Full image and caption
Credit: NASA/JPL-Caltech/SSI/GSFC

In the swirling canopy of Jupiter's atmosphere, cloudless patches are so exceptional that the big ones get the special name "hot spots." Exactly how these clearings form and why they're only found near the planet's equator have long been mysteries. Now, using images from NASA's Cassini spacecraft, scientists have found new evidence that hot spots in Jupiter's atmosphere are created by a Rossby wave, a pattern also seen in Earth's atmosphere and oceans. The team found the wave responsible for the hot spots glides up and down through layers of the atmosphere like a carousel horse on a merry-go-round.

"This is the first time anybody has closely tracked the shape of multiple hot spots over a period of time, which is the best way to appreciate the dynamic nature of these features," said the study's lead author, David Choi, a NASA Postdoctoral Fellow working at NASA's Goddard Space Flight Center in Greenbelt, Md. The paper is published online in the April issue of the journal Icarus.

Choi and his colleagues made time-lapse movies from hundreds of observations taken by Cassini during its flyby of Jupiter in late 2000, when the spacecraft made its closest approach to the planet. The movies zoom in on a line of hot spots between one of Jupiter's dark belts and bright white zones, roughly 7 degrees north of the equator. Covering about two months (in Earth time), the study examines the daily and weekly changes in the sizes and shapes of the hot spots, each of which covers more area than North America, on average.

Much of what scientists know about hot spots came from NASA's Galileo mission, which released an atmospheric probe that descended into a hot spot in 1995. This was the first, and so far only, in-situ investigation of Jupiter's atmosphere.

"Galileo's probe data and a handful of orbiter images hinted at the complex winds swirling around and through these hot spots, and raised questions about whether they fundamentally were waves, cyclones or something in between," said Ashwin Vasavada, a paper co-author who is based at NASA's Jet Propulsion Laboratory in Pasadena, Calif., and who was a member of the Cassini imaging team during the Jupiter flyby. "Cassini's fantastic movies now show the entire life cycle and evolution of hot spots in great detail."

Because hot spots are breaks in the clouds, they provide windows into a normally unseen layer of Jupiter's atmosphere, possibly all the way down to the level where water clouds can form. In pictures, hot spots appear shadowy, but because the deeper layers are warmer, hot spots are very bright at the infrared wavelengths where heat is sensed; in fact, this is how they got their name.

One hypothesis is that hot spots occur when big drafts of air sink in the atmosphere and get heated or dried out in the process. But the surprising regularity of hot spots has led some researchers to suspect there is an atmospheric wave involved. Typically, eight to 10 hot spots line up, roughly evenly spaced, with dense white plumes of cloud in between. This pattern could be explained by a wave that pushes cold air down, breaking up any clouds, and then carries warm air up, causing the heavy cloud cover seen in the plumes. Computer modeling has strengthened this line of reasoning.

From the Cassini movies, the researchers mapped the winds in and around each hot spot and plume, and examined interactions with vortices that pass by, in addition to wind gyres, or spiraling vortices, that merge with the hot spots. To separate these motions from the jet stream in which the hot spots reside, the scientists also tracked the movements of small "scooter" clouds, similar to cirrus clouds on Earth. This provided what may be the first direct measurement of the true wind speed of the jet stream, which was clocked at about 300 to 450 mph (500 to 720 kilometers per hour) -- much faster than anyone previously thought. The hot spots amble at the more leisurely pace of about 225 mph (362 kilometers per hour).

By teasing out these individual movements, the researchers saw that the motions of the hot spots fit the pattern of a Rossby wave in the atmosphere. On Earth, Rossby waves play a major role in weather. For example, when a blast of frigid Arctic air suddenly dips down and freezes Florida's crops, a Rossby wave is interacting with the polar jet stream and sending it off its typical course. The wave travels around our planet but periodically wanders north and south as it goes.

The wave responsible for the hot spots also circles the planet west to east, but instead of wandering north and south, it glides up and down in the atmosphere. The researchers estimate this wave may rise and fall 15 to 30 miles (24 to 50 kilometers) in altitude.

The new findings should help researchers understand how well the observations returned by the Galileo probe extend to the rest of Jupiter's atmosphere. "And that is another step in answering more of the questions that still surround hot spots on Jupiter," said Choi.

The Cassini-Huygens mission is a cooperative project of NASA, the European Space Agency, and the Italian Space Agency. The mission is managed by JPL for NASA's Science Mission Directorate, Washington.