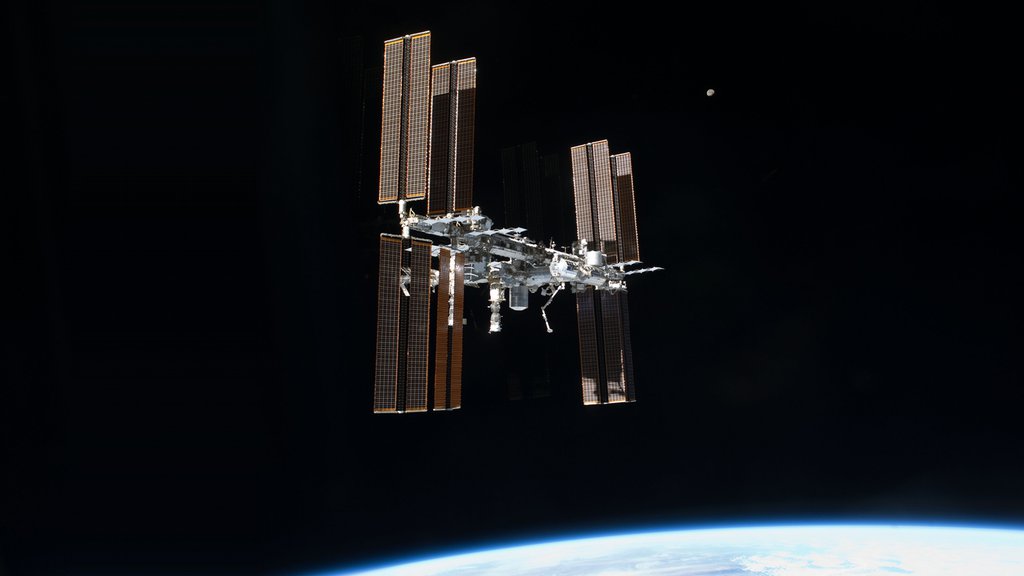 The International Space Station, as seen from space shuttle Atlantis in 2011.
Credit: NASA

Researchers used cutting-edge technology to analyze bacteria present on the International Space Station and compare it to controlled clean rooms on Earth.

Where there are people, there are bacteria, even in space. But what kinds of bacteria are present where astronauts live and work?

Researchers from NASA's Jet Propulsion Laboratory, Pasadena, California, in collaboration with colleagues at other institutions, used state-of-the-art molecular analysis to explore the microbial environment on the International Space Station. They then compared these results to the bacteria found in clean rooms, which are controlled and thoroughly cleaned laboratory environments on Earth. They report their findings in the open access journal Microbiome .

Examining samples from an air filter and a vacuum dust bag from the space station, researchers found opportunistic bacterial pathogens that are mostly innocuous on Earth but can lead to infections that result in inflammations or skin irritations. In general, they found that the human skin-associated bacteria Corynebacterium and Propionibacterium (Actinobacteria) but not Staphylococcus were more abundant on the station than in Earth-based clean rooms.

"Studying the microbial community on the space station helps us better understand the bacteria present there, so that we can identify species that could potentially damage equipment or pose harms to astronaut health. It also helps us identify areas that need more rigorous cleaning," said Kasthuri Venkateswaran, who led the research at JPL with collaborators Aleksandra Checinska, the study's first author, and Parag Vaishampayan.

The findings of this study help NASA establish a baseline for monitoring the cleanliness of the space station, which will in turn help manage astronaut health in the future. However, with this particular type of DNA analysis, researchers could not conclude whether these bacteria are harmful to astronaut health.

The space station is a unique environment, featuring microgravity, space radiation, elevated carbon dioxide and constant presence of humans. Understanding the nature of the communities of microbes -- what scientists call "the microbiome" -- in the space station is key to managing astronaut health and maintenance of equipment.

Previous studies of the station have used traditional microbiology techniques, which culture bacteria and fungi in the lab, to assess the composition of the microbial community. Now, Venkateswaran and colleagues are using the latest DNA sequencing technologies to rapidly and precisely identify the microorganisms present on the space station.

"Deep sequencing allows us to get a closer look at the microbial population than with traditional methods," Venkateswaran said.

The team compared samples from the station's air filter and vacuum bag with dust from two JPL clean rooms. While clean rooms circulate fresh air, the space station filters and recirculates existing air. Also, importantly, there are always six people living on the space station, whereas a cleanroom may see 50 people go in and out in a day, but not be inhabited continuously. Clean rooms are not airtight, but there are several layers of rooms that would prevent the free exchange of air particulates.

The researchers analyzed the samples for microorganisms, and then stained their cells with a dye to determine whether they were living or dead. This enabled them to measure the size and diversity of viable bacterial and fungal populations, and determine how closely the conditions in the Earth clean rooms compare with the space station environment.

Their results show that Actinobacteria made up a larger proportion of the microbial community in the space station than in the cleanrooms. The authors conclude that this could be due to the more stringent cleaning regimens possible on Earth. The research did not address the virulence of these pathogens in closed environments or the risk of skin infection to astronauts.

Using these newer DNA sequencing technologies, researchers could also, in the future, study how microgravity affects bacteria. The current thinking is that microgravity is not favorable to bacterial survival generally, but that some species that can withstand it may become more virulent. Such research will be important for long-duration space missions, such as NASA's journey to Mars.

This research was carried out on a competitive grant awarded by the NASA Space Biology program. The California Institute of Technology manages JPL for NASA.

Adapted from a Microbiome press release.