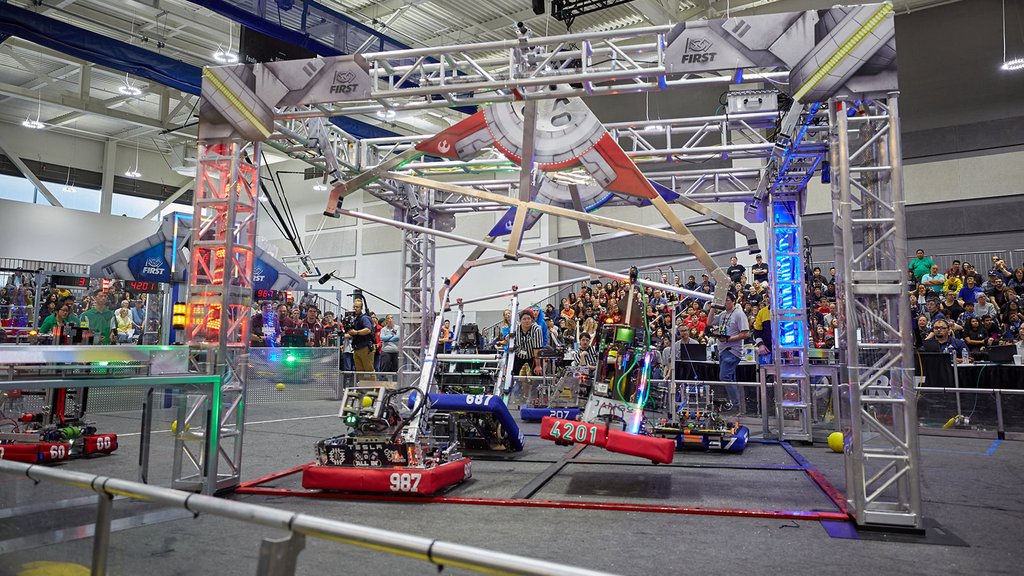 Using their robotic arms, the finalists of the 2020 FIRST Robotics regional event in El Segundo, California grapple with a horizontal bar to score bonus points at the end of the round.
Credit: Matt Beard Photography, Inc. (CC BY-NC-ND 4.0) 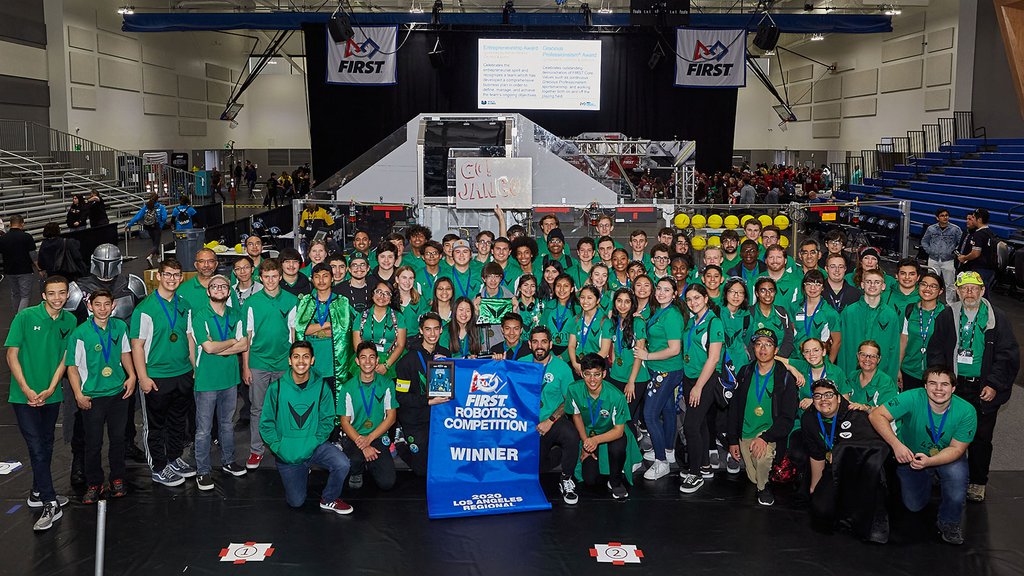 After duking it out in the 20th Annual Los Angeles FIRST Robotics Regional Competition, three victors are moving on to the world championships.

The tension was palpable as six student-built robots vied for dominance at the Da Vinci Schools arena in El Segundo, California, in the second round of the best-of-three final match. Since the Red Alliance had won the first, the Blue Alliance needed a win the second. But as the two-minute round concluded, it was clear that the Red Alliance's victory was assured, and the cheers of hundreds of students, mentors and spectators erupted from the stands.

This action-packed finale marked the culmination of the 20th Annual Los Angeles FIRST Robotics Regional Competition over the weekend, which attracted 44 teams of high-school students from the L.A. area, Nevada, Chile, Mexico, France, Brazil and Turkey. Mentored by experts from a range of aerospace and engineering organizations, including NASA's Jet Propulsion Laboratory, the students constructed robots to save "FIRST City" from being destroyed by asteroids.

The city and asteroids, of course, were fictional, but the challenge - called "Infinite Recharge" - was not. Individual teams formed alliances of three teams, commanding their robots to collect "power cells" (actually, squishy yellow balls) to energize their protective "shield generators." After being collected from the tennis court-sized arena, the power cells had to be shot into the shield generator's open doors. The more balls that hit the target, the higher the score. At the end of the round, the robots (which could be as heavy as 125 pounds, or 57 kilograms) gathered in the center of the arena to employ an extendible arm, latch onto a dangling metal beam and hoist themselves into the air, thereby activating the generator and saving the city.

While engineering is at the core of the competition, the task of building robots in a few weeks, testing them and then competing against some of the world's best high-school robotics teams means so much more to the students.

"As an aspiring aerospace engineer, it's really nice to walk into a place where I can look at a problem, solve it, and then see how other people have solved it, and compete against them," said Brian Di Mascio, a junior at L.A.-area Burbank High School and member of the JPL-mentored Team 980 ("ThunderBots").

This sentiment was shared by Irma Lopez, a tenth grader from L.A.'s Foshay Learning Center and member of Team 597 ("The Wolverines"). "With robotics, not only are you developing the hard skills like wiring and programming," she said, "you're also developing presentation skills, business know-how and understanding the importance of community outreach. Overall it's impacted me in a very positive way."

It impacts the other participants positively, too. Every year for the past two decades JPL has helped organize the Los Angeles regional, and for much of that time JPL engineer David Brinza has been mentoring Thunderbots, which gives him a special perspective. "If you're mentoring a team, you get to watch the kids grow; you see them take responsibility and assume positions of leadership," he said. "As a part of the FIRST Robotics teams, they learn valuable communication skills and accountability while understanding what it's like to participate in a team environment," he said, adding that many of these practical lessons aren't available in a traditional high school environment.

The competition inevitably brings other, unexpected challenges that help to hone other skills. With only a few weeks to build robotic creations featuring varying degrees of automation - including auto-tracking turrets that could identify the balls' target using code written by the students - anything could go wrong. This was particularly true for Chile's Team 5512 ("Pizza Mecánica").

"We came to the U.S. with the robot in our suitcases," said team member Valentina Flores. "We built the robot in Chile, but we then had to take it apart and reassemble it when we got here. We found that parts didn't fit as they should."

They managed to get rolling with a little determination. "It was hard and stressful, but we are here and we have a robot ... or at least something that looks like it!" said teammate Joaquim Rodriguez.

The 2020 Los Angeles regional's winning Red Alliance was composed of Team 987 ("Highrollers"), Team 4201 ("The Vitruvian Bots") and Team 6000 ("Firehawk Robotics"); all three will progress to the world championships in Houston in April. Team 4400 ("Peñoles Cerbotics") from Mexico will also advance to the championships after winning the prestigious Chairman's Award, which recognizes the team that reflects sustained excellence in the FIRST community and beyond, serving as role models while educating the public about FIRST.

The annual global tournament is organized by the nonprofit FIRST (For Inspiration and Recognition of Science and Technology) to encourage students to embark on STEM careers and to boost team management skills. The 2020 FIRST season has partnered with Lucasfilm and parent company Disney as part of the "Star Wars: Force for Change" philanthropic initiative that aims to inspire the next generation of innovators.

For its commitment to the challenge, JPL received FIRST's "Volunteer of the Year" award, the first time the honor has been given to an organization and not an individual. JPL Public Services Manager Kim Lievense, who has worked with FIRST Robotics for 20 years, accepted the award on behalf of all the JPL volunteers.