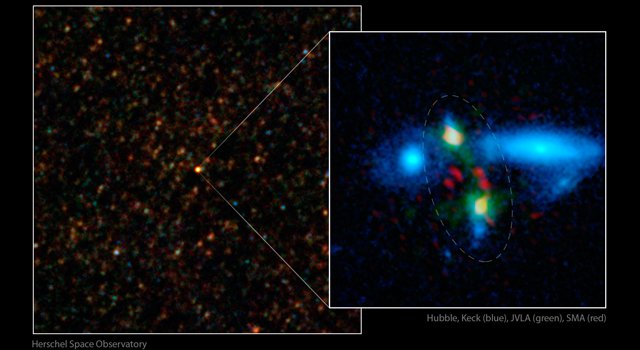 Several telescopes have teamed up to discover a rare and massive merging of two galaxies that took place when the universe was just 3 billion years old (its current age is about 14 billion years). The galaxies, collectively called HXMM01, are churning out the equivalent of 2,000 suns a year. By comparison, our Milky Way hatches about two to three suns a year. The total number of stars in both colliding galaxies averages out to about 400 billion suns.› Full image and caption
Credit: ESA/NASA/JPL-Caltech/UC Irvine/STScI/Keck/NRAO/SAO

A massive and rare merging of two galaxies has been spotted in images taken by the Herschel space observatory, a European Space Agency mission with important NASA participation.

PASADENA, Calif. - A massive and rare merging of two galaxies has been spotted in images taken by the Herschel space observatory, a European Space Agency mission with important NASA participation.

Follow-up studies by several telescopes on the ground and in space, including NASA's Hubble Space Telescope and Spitzer Space Telescope, tell a tale of two faraway galaxies intertwined and furiously making stars. Eventually, the duo will settle down to form one super-giant elliptical galaxy.

The findings help explain a mystery in astronomy. Back when our universe was 3 billion to 4 billion years old, it was populated with large reddish elliptical-shaped galaxies made up of old stars. Scientists have wondered whether those galaxies built up slowly over time through the acquisitions of smaller galaxies, or formed more rapidly through powerful collisions between two large galaxies.

The new findings suggest massive mergers are responsible for the giant elliptical galaxies.

"We're looking at a younger phase in the life of these galaxies -- an adolescent burst of activity that won't last very long," said Hai Fu of the University of California at Irvine, who is lead author of a new study describing the results. The study is published in the May 22 online issue of Nature.

"These merging galaxies are bursting with new stars and completely hidden by dust," said co-author Asantha Cooray, also of the University of California at Irvine. "Without Herschel's far-infrared detectors, we wouldn't have been able to see through the dust to the action taking place behind."

Herschel, which operated for almost four years, was designed to see the longest-wavelength infrared light. As expected, it recently ran out of the liquid coolant needed to chill its delicate infrared instruments. While its mission in space is over, astronomers still are scrutinizing the data, and further discoveries are expected.

In the new study, Herschel was used to spot the colliding galaxies, called HXMM01, located about 11 billion light-years from Earth, during a time when our universe was about 3 billion years old. At first, astronomers thought the two galaxies were just warped, mirror images of one galaxy. Such lensed galaxies are fairly common in astronomy and occur when the gravity from a foreground galaxy bends the light from a more distant object. After a thorough investigation, the team realized they were actually looking at a massive galaxy merger.

Follow-up characterization revealed the merging galaxies are churning out the equivalent of 2,000 stars a year. By comparison, our Milky Way hatches about two to three stars a year. The total number of stars in both colliding galaxies averages out to about 400 billion.

Mergers are fairly common in the cosmos, but this particular event is unusual because of the prolific amounts of gas and star formation, and the sheer size of the merger at such a distant epoch.

The results go against the more popular model explaining how the biggest galaxies arise: through minor acquisitions of small galaxies. Instead, mega smash-ups may be doing the job.

NASA's Herschel Project Office is based at the agency's Jet Propulsion Laboratory in Pasadena, Calif., which contributed mission-enabling technology for two of Herschel's three science instruments. JPL is a division of the California Institute of Technology, Pasadena.