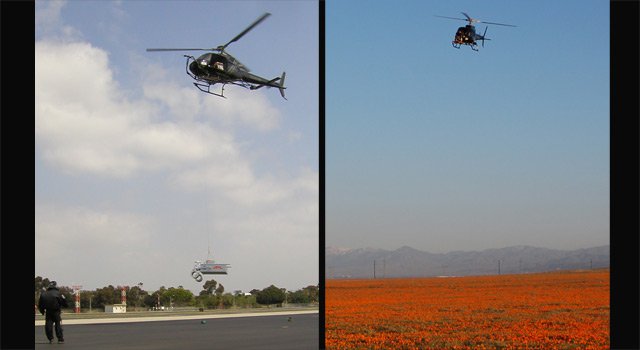 This spring, engineers are testing a radar system that will serve during the next landing on Mars.

This spring, engineers are testing a radar system that will serve during the next landing on Mars.

Recent tests included some near Lancaster, Calif., against a backdrop of blooming California poppy fields. In those tests, a helicopter carried an engineering test model of the landing radar for NASA's Mars Science Laboratory on prescribed descent paths. The descents at different angles and from different heights simulated paths associated with specific candidate sites for the mission.

The Mars Science Laboratory mission, managed by NASA's Jet Propulsion Laboratory, Pasadena, Calif., for NASA, is in its assembly and testing phase, in advance of a launch in autumn 2011 and delivery of a rover named Curiosity to Mars in summer 2012.

During the final stage of the spacecraft's arrival at Mars in 2012, a rocket-powered descent stage will lower the rover on a tether directly to the ground. This rover is too big for the airbag-cushioned landing method used by NASA's Mars Pathfinder mission in 1997 and Mars Exploration Rover landings in 2004.

At Mars, a radar on the descent stage will track the spacecraft's decreasing distance from the surface. Additional helicopter-flown testing of the mission's radar system will include checks of whether the suspended rover might confuse the radar about the speed of descent toward the ground.

Wolfe Air Aviation, of Pasadena, Calif., is providing the helicopter and flight services for the testing by a team of JPL engineers. The engineering test radar is affixed to a gimbal mounting at the front of the helicopter, which is more often used for aerial photography.