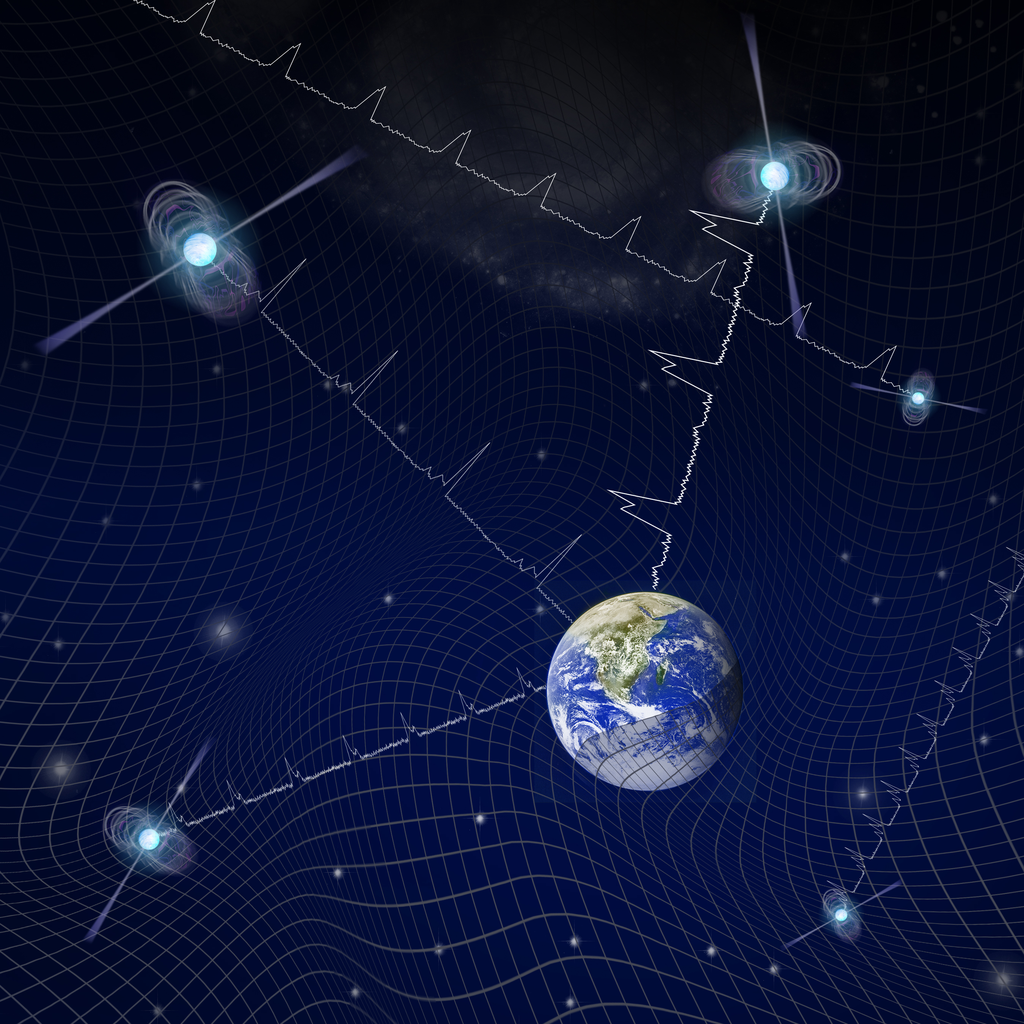 This illustration shows the NANOGrav project observing cosmic objects called pulsars in an effort detect gravitational waves – ripples in the fabric of space. The project is seeking a low-level gravitational wave background signal that is thought to be present throughout the universe.

An international team of scientists may be close to detecting faint ripples in space-time that fill the universe.

Pairs of black holes billions of times more massive than the Sun may be circling one another, generating ripples in space itself. The North American Nanohertz Observatory for Gravitational Waves (NANOGrav) has spent more than a decade using ground-based radio telescopes to look for evidence of these space-time ripples created by behemoth black holes. This week, the project announced the detection of a signal that may be attributable to gravitational waves, though members aren't quite ready to claim success.

Gravitational waves were first theorized by Albert Einstein in 1916, but they weren't directly detected until nearly a century later. Einstein showed that rather than being a rigid backdrop for the universe, space is a flexible fabric that is warped and curved by massive objects and inextricably linked with time. In 2015, a collaboration between the U.S.-based Laser Interferometer Gravitational-wave Observatory (LIGO) and the Virgo interferometer in Europe announced the first direct detection of gravitational waves: They were emanating from two black holes - each with a mass about 30 times greater than the Sun - circling one another and merging.

In a new paper published in the January 2021 issue of the Astrophysical Journal Supplements, the NANOGrav project reports the detection of unexplained fluctuations, consistent with the effects of gravitational waves, in the timing of 45 pulsars spread across the sky and measured over a span of 12 1/2 years.

Pulsars are dense nuggets of material left over after a star explodes as a supernova. As seen from Earth, pulsars appear to blink on and off. In reality, the light comes from two steady beams emanating from opposite sides of the pulsar as it spins, like a lighthouse. If gravitational waves pass between a pulsar and Earth, the subtle stretching and squeezing of space-time would appear to introduce a small deviation in the pulsar's otherwise regular timing. But this effect is subtle, and more than a dozen other factors are known to influence pulsar timing as well. A major part of the work done by NANOGrav is to subtract those factors from the timing data for each pulsar before looking for signs of gravitational waves.

LIGO and Virgo detect gravitational waves from individual pairs of black holes (or other dense objects called neutron stars). By contrast, NANOGrav is looking for a persistent gravitational wave "background," or the noiselike combination of waves created over billions of years by countless pairs of supermassive black holes orbiting one another across the universe. These objects produce gravitational waves with much longer wave lengths than those detected by LIGO and Virgo - so long that it might take years for a single wave to pass by a stationary detector. So while LIGO and Virgo can detect thousands of waves per second, NANOGrav's quest requires years of data.

As tantalizing as the latest finding is, the NANOGrav team isn't ready to claim they've found evidence of a gravitational wave background. Why the hesitation? In order to confirm direct detection of a signature from gravitational waves, NANOGrav's researchers will have to find a distinctive pattern in the signals between individual pulsars. According to Einstein's theory of general relativity, the effect of the gravitational wave background should influence the timing of the pulsars slightly differently based on their positions relative to one another.

At this point, the signal is too weak for such a pattern to be distinguishable. Boosting the signal will require NANOGrav to expand its dataset to include more pulsars studied for even longer lengths of time, which will increase the array's sensitivity. NANOGrav is also pooling its data with those from other pulsar timing array experiments in a joint effort by the International Pulsar Timing Array, a collaboration of researchers using the world's largest radio telescopes.

"Trying to detect gravitational waves with a pulsar timing array requires patience," said Scott Ransom with the National Radio Astronomy Observatory and the current chairperson of NANOGrav. "We're currently analyzing over a dozen years of data, but a definitive detection will likely take a couple more. It's great that these new results are exactly what we would expect to see as we creep closer to a detection."

The NANOGrav team discussed their findings at a press conference on Jan. 11 at the 237th meeting of the American Astronomical Society, held virtually from Jan. 10 to 15. Michele Vallisneri and Joseph Lazio, both astrophysicists at NASA's Jet Propulsion Laboratory in Southern California, and Zaven Arzoumanian at NASA's Goddard Space Flight Center in Maryland are co-authors of the paper. Joseph Simon, a researcher at University of Colorado Boulder and the paper's lead author, conducted much of the analysis for the paper as a postdoctoral researcher at JPL. Multiple NASA postdoctoral fellows have participated in the NANOGrav research while at JPL. NANOGrav is a collaboration of U.S. and Canadian astrophysicists. The data in the new study was collected using the Green Bank antenna in West Virginia and the Arecibo dish in Puerto Rico before its recent collapse.