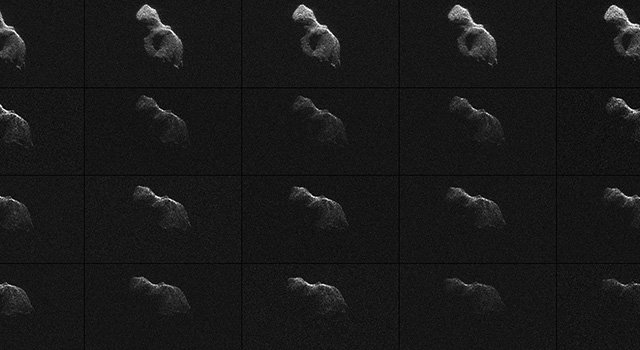 NASA scientists using Earth-based radar have produced sharp views of a recently discovered asteroid as it slid silently past our planet.

NASA scientists using Earth-based radar have produced sharp views of a recently discovered asteroid as it slid silently past our planet. Captured on June 8, 2014, the new views of the object designated "2014 HQ124" are some of the most detailed radar images of a near-Earth asteroid ever obtained.

An animation of the rotating asteroid and a collage of the images are available at:

According to Benner, 2014 HQ124 appears to be an elongated, irregular object that is at least 1,200 feet (370 meters) wide on its long axis. "This may be a double object, or 'contact binary,' consisting of two objects that form a single asteroid with a lobed shape," he said. The images reveal a wealth of other features, including a puzzling pointy hill near the object's middle, on top as seen in the images.

The 21 radar images were taken over a span of four-and-a-half hours. During that interval, the asteroid rotated a few degrees per frame, suggesting its rotation period is slightly less than 24 hours.

Each image in the collage and movie represents 10 minutes of data.

The new views show features as small as about 12 feet (3.75 meters) wide. This is the highest resolution currently possible using scientific radar antennas to produce images. Such sharp views for this asteroid were made possible by linking together two giant radio telescopes to enhance their capabilities.

A recent equipment upgrade at Arecibo enabled the two facilities to work in tandem to obtain images with this fine level of detail for the first time.

"By itself, the Goldstone antenna can obtain images that show features as small as the width of a traffic lane on the highway," said Benner. "With Arecibo now able to receive our highest-resolution Goldstone signals, we can create a single system that improves the overall quality of the images."

The first five images in the new sequence -- the top row in the collage -- represent the data collected by Arecibo, and are 30 times brighter than what Goldstone can produce observing on its own.

Scientists were fortunate to be able to make these radar observations at all, as this particular asteroid was only recently discovered. NASA's NEOWISE mission, a space telescope adapted for scouting the skies for the infrared light emitted by asteroids and comets, first spotted the space rock on April 23, 2014. Additional information about the asteroid's discovery and its orbit was shared in a previous Web story online at:

Along with the resources NASA puts into understanding asteroids, it also partners with other U.S. government agencies, university-based astronomers and space science institutes across the country that are working to find, track and understand these objects better, often with grants, interagency transfers and other contracts from NASA. In addition, NASA values the work of numerous highly skilled amateur astronomers, whose accurate observational data helps improve asteroid orbits after they are found.

The contributions of JPL engineers Jon Giorgini, Joseph Jao and Clement Lee were critical to the successful execution of these observations.