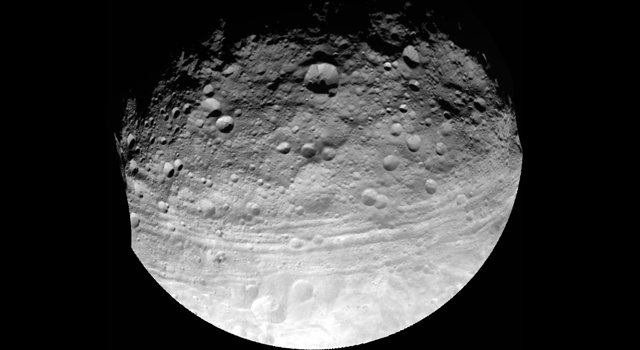 This full view of the giant asteroid Vesta was taken by NASA's Dawn spacecraft, as part of a rotation characterization sequence on July 24, 2011, at a distance of 3,200 miles (5,200 kilometers). A rotation characterization sequence helps the scientists and engineers by giving an initial overview of the character of the surface as Vesta rotated underneath the spacecraft.› Full image and caption
Credit: NASA/JPL-Caltech/UCLA/MPS/DLR/IDA

Enormous troughs that wrap around the giant asteroid Vesta may actually be dropped blocks of terrain bounded by fault lines, suggesting a geologic complexity beyond that of most asteroids. Since the discovery of the troughs last year in data from NASA's Dawn spacecraft, scientists have been working to determine the story behind these unusual features. The research reinforces the claim that Vesta has a core, mantle and crust, a structure normally reserved for larger bodies, such as planets and large moons.

An extensive system of troughs encircles Vesta's equatorial region. The biggest of those troughs, named Divalia Fossa, surpasses the size of the Grand Canyon. It spans 289 miles (465 kilometers) in length, 13.6 miles (22 kilometers) in width and 3 miles (5 kilometers) in depth. The complexity of the troughs' morphology can't be explained by small collisions. New measurements from Dawn indicate that a large collision could have created the asteroid's troughs, said Debra Buczkowski, a Dawn participating scientist based at the Johns Hopkins University Applied Physics Laboratory in Laurel, Md., who is the lead author of a new paper in Geophysical Research Letters, a journal of the American Geophysical Union. The crustal layer at the surface appeared to stretch to the breaking point and large portions of the crust dropped down along two faults on either side of the downward-moving block, leaving the giant troughs we see today.

The scale of the fracturing would only have been possible if the asteroid is differentiated - meaning that it has a core, mantle and crust. "By saying it's differentiated," said Buczkowski, "we're basically saying Vesta was a little planet trying to happen."