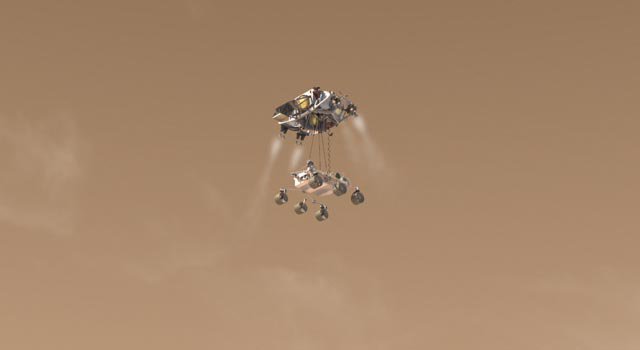 This artist's concept from an animation depicts Curiosity, the rover to be launched in 2011 by NASA's Mars Science Laboratory, as it is being lowered by the mission's rocket-powered descent stage during a critical moment of the "sky crane" landing in 2012.
Credit: NASA/JPL-Caltech

For optimal communications during arrival at Mars, NASA's Mars Science Laboratory, or Curiosity, will launch after Thanksgiving 2011 and land on Mars in August 2012.

Planners of NASA's next Mars mission have selected a flight schedule that will use favorable positions for two currently orbiting NASA Mars orbiters to obtain maximum information during descent and landing.

Continuing analysis of the geometry and communications options for the arrival at Mars have led planners for the Mars Science Laboratory, or Curiosity, to choose an Earth-to-Mars trajectory that schedules launch between Nov. 25 and Dec. 18, 2011. Landing will take place between Aug. 6 and Aug. 20, 2012. Due to an Earth-Mars planetary alignment, this launch period actually allows for a Mars arrival in the earlier portion of the landing dates under consideration.

"The key factor was a choice between different strategies for sending communications during the critical moments before and during touchdown," said Michael Watkins, mission manager at NASA's Jet Propulsion Laboratory in Pasadena, Calif. "The shorter trajectory is optimal for keeping both orbiters in view of Curiosity all the way to touchdown on the surface of Mars. The longer trajectory allows direct communication to Earth all the way to touchdown."

The simplicity of direct-to-Earth communication from Curiosity during landing has appeal to mission planners, in comparison to relying on communications relayed via NASA's Mars Odyssey, which has been orbiting Mars since 2001, and NASA's Mars Reconnaissance Orbiter, in operation since 2006. However, the direct-to-Earth option allows a communication rate equivalent to only about 1 bit per second, while the relay option allows about 8,000 bits or more per second.

Landing on Mars is always difficult, with success uncertain. After an unsuccessful attempted Mars landing in 1999 without definitive information on the cause of the mishap, NASA put a high priority on communication during subsequent Mars landings.

"It is important to capture high-quality telemetry to allow us to learn what happens during the entry, descent and landing, which is arguably the most challenging part of the mission," said Fuk Li, manager of NASA's Mars Exploration Program at JPL. "The trajectory we have selected maximizes the amount of information we will learn to mitigate any problems."

Curiosity will use several innovations during entry into the Martian atmosphere, descent and landing in order to hit a relatively small target area on the surface and set down a rover too heavy for the cushioning air bags used in earlier Mars rover landings. In a "sky-crane" maneuver during the final minute of arrival, a rocket-powered descent stage will lower Curiosity on a tether for a wheels-down landing directly onto the surface.

Even though Curiosity won't be communicating directly with Earth at touchdown, data about the landing will reach Earth promptly. Odyssey will be in view of both Earth and Curiosity, in position to immediately forward to Earth the data stream it is receiving during the touchdown. Odyssey performed this type of "bent-pipe" relay during the May 25, 2008, arrival of NASA's Phoenix Mars Lander.

Curiosity will rove extensively on Mars, carrying an analytical laboratory and other instruments to examine a carefully selected landing area. It will investigate whether conditions there have favored development of microbial life and its preservation in the rock record. Plans call for the mission to operate on Mars for a full Martian year, which is equivalent to two Earth years.

Consideration of landing sites for the mission narrowed to four finalist candidates in November 2008. The candidate sites are still being analyzed for safety and science attributes.

More information about NASA's Mars Science Laboratory is at: http://www.nasa.gov/msl.