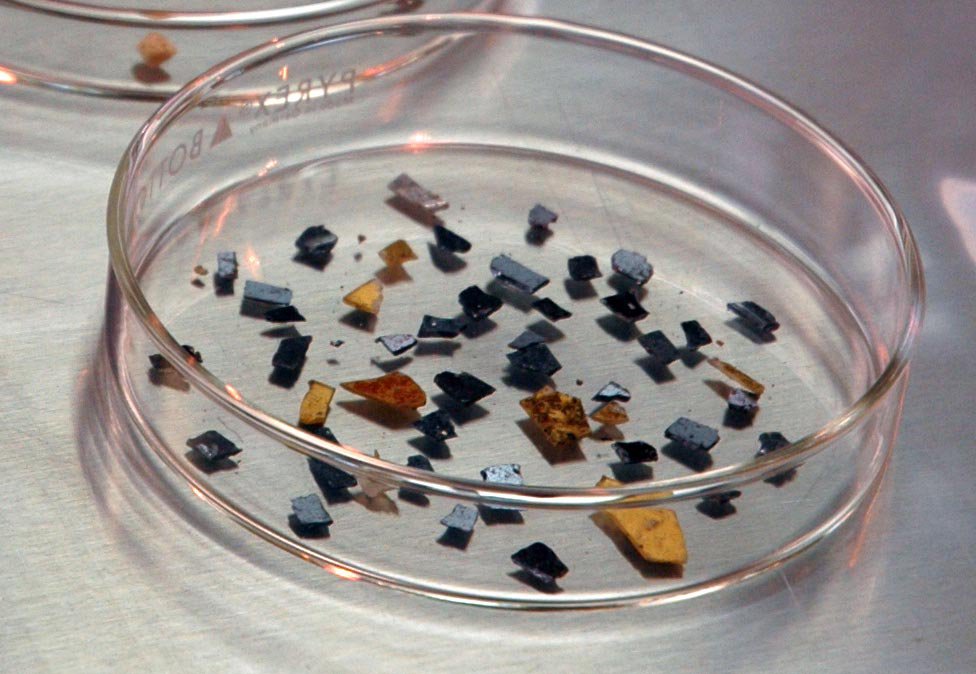 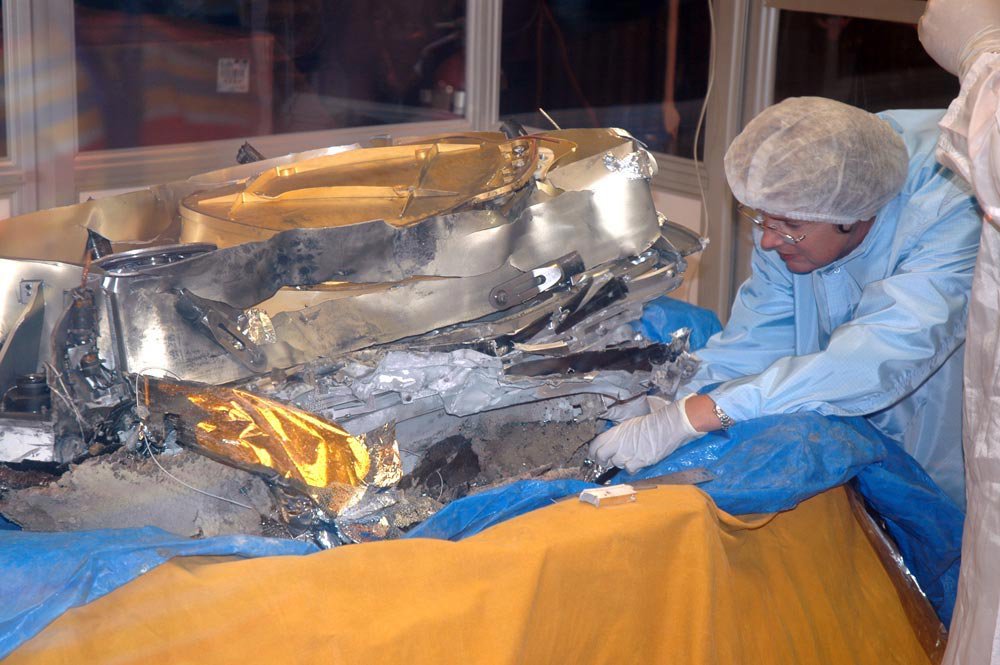 The Genesis science canister is inside a clean room at the U.S. Army Dugway Proving Ground, Utah. Scientists are hopeful that the recovered Genesis samples will be sufficient to achieve the mission's science goals.

"We are bouncing back from a hard landing, and spirits are picking up again," said Orlando Figueroa, deputy associate administrator for programs for the Science Mission Directorate at NASA Headquarters in Washington.

"This may result in snatching victory from the jaws of defeat," added Dr. Roger Wiens of the Los Alamos National Laboratory in New Mexico, a member of the Genesis science team. "We are very encouraged." Based on initial inspection, it is possible a repository of solar wind materials may have survived that will keep the science community busy for some time.

"We are pleased and encouraged by the preliminary inspection," said NASA Administrator Sean O'Keefe. "The outstanding design and sturdy construction of Genesis may yield the important scientific results we hoped for from the mission."

"I want to emphasize the excellent work by the navigation team to bring the capsule back exactly on target was key in our ability to recover the science," said Andrew Dantzler, director of the Solar System Division at NASA Headquarters, Washington. "In addition, the robustness of the design of the spacecraft was the reason it could take such a hard landing and still give us a chance to recover the samples."

The mission's main priority is to measure oxygen isotopes to determine which of several theories is correct regarding the role of oxygen in the formation of the solar system. Scientists hope to determine this with isotopes collected in the four target segments of the solar wind concentrator carried by the Genesis spacecraft. "From our initial look, we can see that two of the four concentrator segments are in place, and all four may be intact," Wiens said.

The mission's second priority is to analyze nitrogen isotopes that will help us understand how the atmospheres of the planets in our solar system evolved. "These isotopes will be analyzed using gold foil, which we have also found intact," Wiens said.

Other samples of solar winds are contained on hexagonal wafers. It appears these are all or nearly all broken, but sizable pieces will be recovered, and some are still mounted in their holders. "We won't really know how many can be recovered for some time, but we are far more hopeful important science can be conducted than we were on Wednesday," Wiens said.

Another type of collector material, foils contained on the canister's lid, were designed to collect other isotopes in the solar wind. It appears approximately three-fourths of these are recoverable, according to Dr. Dave Lindstrom, mission program scientist at NASA Headquarters. However, these foils have been exposed to elements of the Utah desert.

The Genesis sample return capsule landed well within the projected ellipse path in the Utah Test & Training Range on Sept. 8, but its parachutes did not open. It impacted the ground at nearly 320 kilometers per hour (nearly 200 miles per hour). NASA's Jet Propulsion Laboratory, a division of the California Institute of Technology in Pasadena, Calif., manages the Genesis mission for the agency's Science Mission Directorate. Lockheed Martin Space Systems, Denver, developed and operated the spacecraft.