Genesis Gets to the Point 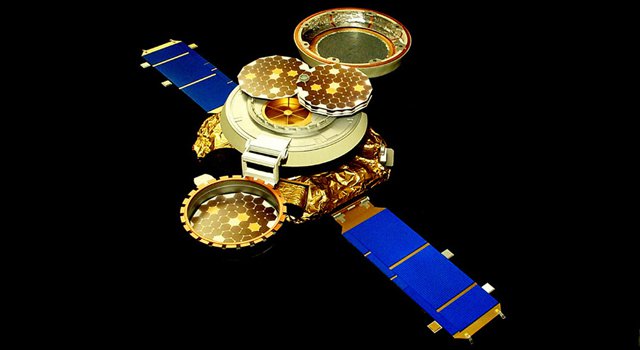 Artist Rendering of the Genesis Spacecraft During Collection Phase of Mission

NASA's Genesis spacecraft will begin its primary science mission of collecting particles from the solar wind when it begins to orbit a point between the Sun and Earth on Friday, Nov. 16.

NASA's Genesis spacecraft will begin its primary science mission of collecting particles from the solar wind when it begins to orbit a point between the Sun and Earth on Friday, Nov. 16.

Engineers will send a final command to the spacecraft at 11:03 a.m. Pacific time (1903 Universal time) to begin operating its hydrazine thrusters for about 267 seconds. This will put the spacecraft into its final orbit at 1908 Universal time (11:08 a.m. PST) to begin the particle-gathering phase of the mission. The orbit is at a point where the gravity of Earth and the Sun are balanced. This is called the Lagrange point, or L1.

"This is a crucial maneuver for Genesis, since it sets up the five-loop halo orbit around L1 in which we gather the solar wind samples," said project manager Chester Sasaki of NASA's Jet Propulsion Laboratory, Pasadena, Calif., which manages the mission. The mission is designed to help scientists understand how our solar system formed.

After mission managers check to make sure Genesis has successfully entered orbit, they will begin to prepare for the spacecraft's main goal: collecting solar wind samples.

L1 is an ideal location for Genesis' studies, since it affords an uninterrupted view of the Sun and is beyond Earth's magnetosphere, which disrupts the solar wind. Genesis will expend very little propellant to stay in orbit, since the forces of the Sun, Earth and the spacecraft are carefully balanced in its orbit around the point.

The mission's planners have built-in maneuvers to maintain the spacecraft in its orbit around the Lagrange point. If Genesis' injection into orbit goes as planned, the next maneuvers will be very small. On Nov. 30, the sample return capsule will be opened, and a few days later Genesis will open its inner canister, extend its collector arrays and begin collecting concentrated ions.

Genesis will fly in a path nicknamed "the lazy eight": a flight path that resembles a well-formed potato chip. Genesis heads to the L1 point 1.5 million kilometers (930,000 miles) from Earth, and orbits there for 29 months. On its return, the spacecraft swoops past Earth and around another Lagrange point, L2, a mirror image of L1 on the opposite side of Earth, to position itself to enter Earth's atmosphere and return its precious cargo of solar wind samples in August 2004.

More information on the Genesis mission can be found at http://genesismission.jpl.nasa.gov .