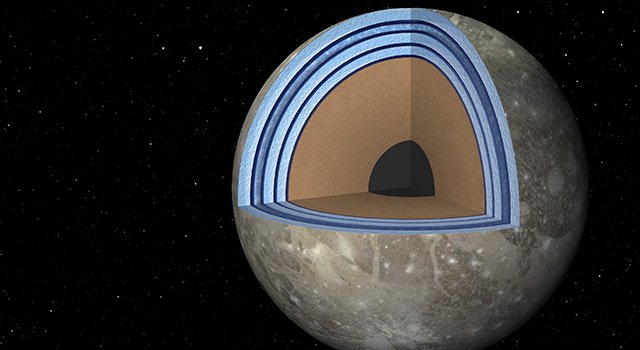 This artist's concept of Jupiter's moon Ganymede, the largest moon in the solar system, illustrates the "club sandwich" model of its interior oceans.› Full image and caption
Credit: NASA/JPL-Caltech

Jupiter's largest moon might be stacked with multiple layers of oceans and ice.

The largest moon in our solar system, a companion to Jupiter named Ganymede, might have ice and oceans stacked up in several layers like a club sandwich, according to new NASA-funded research that models the moon's makeup.

Previously, the moon was thought to harbor a thick ocean sandwiched between just two layers of ice, one on top and one on bottom.

The results support the idea that primitive life might have possibly arisen on the icy moon. Scientists say that places where water and rock interact are important for the development of life; for example, it's possible life began on Earth in bubbling vents on our sea floor. Prior to the new study, Ganymede's rocky sea bottom was thought to be coated with ice, not liquid -- a problem for the emergence of life. The "club sandwich" findings suggest otherwise: the first layer on top of the rocky core might be salty water.

"This is good news for Ganymede," said Vance. "Its ocean is huge, with enormous pressures, so it was thought that dense ice had to form at the bottom of the ocean. When we added salts to our models, we came up with liquids dense enough to sink to the sea floor."

NASA scientists first suspected an ocean in Ganymede in the 1970s, based on models of the large moon, which is bigger than Mercury. In the 1990s, NASA's Galileo mission flew by Ganymede, confirming the moon's ocean, and showing it extends to depths of hundreds of miles. The spacecraft also found evidence for salty seas, likely containing the salt magnesium sulfate.

Previous models of Ganymede's oceans assumed that salt didn't change the properties of liquid very much with pressure. Vance and his team showed, through laboratory experiments, how much salt really increases the density of liquids under the extreme conditions inside Ganymede and similar moons. It may seem strange that salt can make the ocean denser, but you can see for yourself how this works by adding plain old table salt to a glass of water. Rather than increasing in volume, the liquid shrinks and becomes denser. This is because the salt ions attract water molecules.

The models get more complicated when the different forms of ice are taken into account. The ice that floats in your drinks is called "Ice I." It's the least dense form of ice and lighter than water. But at high pressures, like those in crushingly deep oceans like Ganymede's, the ice crystal structures become more compact. "It's like finding a better arrangement of shoes in your luggage -- the ice molecules become packed together more tightly," said Vance. The ice can become so dense that it is heavier than water and falls to the bottom of the sea. The densest and heaviest ice thought to persist in Ganymede is called "Ice VI."

By modeling these processes using computers, the team came up with an ocean sandwiched between up to three ice layers, in addition to the rocky seafloor. The lightest ice is on top, and the saltiest liquid is heavy enough to sink to the bottom. What's more, the results demonstrate a possible bizarre phenomenon that causes the oceans to "snow upwards." As the oceans churn and cold plumes snake around, ice in the uppermost ocean layer, called "Ice III," could form in the seawater. When ice forms, salts precipitate out. The heavier salts would thus fall downward, and the lighter ice, or "snow," would float upward. This "snow" melts again before reaching the top of the ocean, possibly leaving slush in the middle of the moon sandwich.

"We don't know how long the Dagwood-sandwich structure would exist," said Christophe Sotin of JPL. "This structure represents a stable state, but various factors could mean the moon doesn't reach this stable state.

Sotin and Vance are both members of the Icy Worlds team at JPL, part of the multi-institutional NASA Astrobiology Institute based at the Ames Research Center in Moffett Field, Calif.

The results can be applied to exoplanets too, planets that circle stars beyond our sun. Some super-Earths, rocky planets more massive than Earth, have been proposed as "water worlds" covered in oceans. Could they have life? Vance and his team think laboratory experiments and more detailed modeling of exotic oceans might help find answers.

Ganymede is one of five moons in our solar system thought to support vast oceans beneath icy crusts. The other moons are Jupiter's Europa and Callisto and Saturn's Titan and Enceladus. The European Space Agency is developing a space mission, called JUpiter ICy moons Explorer or JUICE, to visit Europa, Callisto and Ganymede in the 2030s. NASA and JPL are contributing to three instruments on the mission, which is scheduled to launch in 2022 (see http://www.jpl.nasa.gov/news/news.php?release=2013-069).

Other authors of the study are Mathieu Bouffard of Ecole Normale Supérieure de Lyon, France, and Mathieu Choukroun, also of JPL and the Icy World team of the NASA Astrobiology Institute. JPL is managed by the California Institute of Technology in Pasadena for NASA.