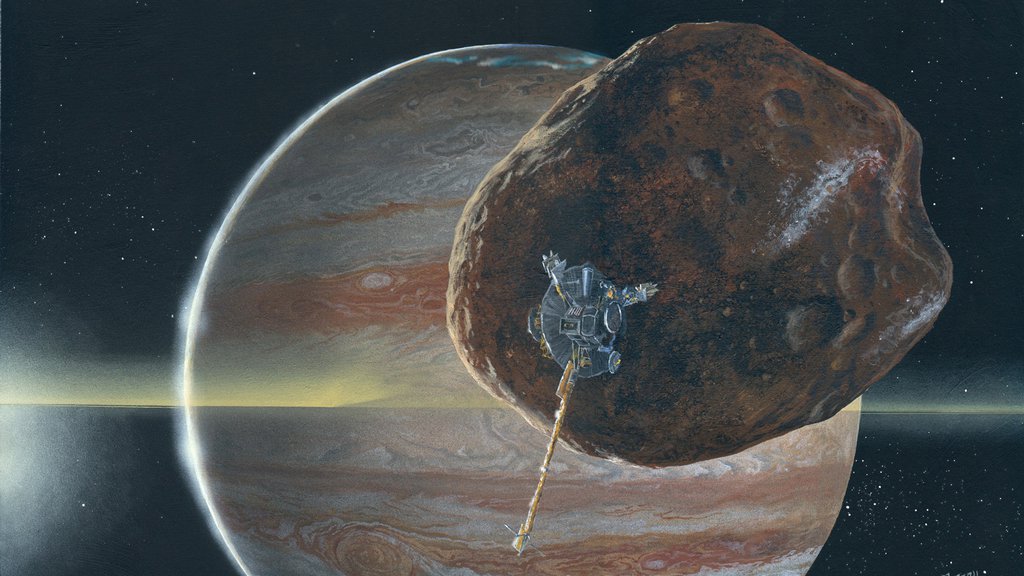 NASA's Galileo spacecraft has begun transmitting high-priority scientific information that was collected and stored on its tape recorder during the orbiter's early-November dash by Jupiter, which brought it closer to the planet than ever before.

NASA's Galileo spacecraft has begun transmitting high-priority scientific information that was collected and stored on its tape recorder during the orbiter's early-November dash by Jupiter, which brought it closer to the planet than ever before.

Damage from naturally strong radiation near Jupiter had left the tape recorder inoperable for weeks. Galileo's flight team traced the problem to a light-emitting diode in the electronics controlling the motor drive, and then gradually and carefully completed a successful long-distance repair job.

"We're delighted playback has begun. There was no guarantee we could get to this point," said Dr. Eilene Theilig, Galileo project manager at NASA's Jet Propulsion Laboratory, Pasadena, Calif. "It's a real tribute to the dedication and creativity of the team, and it continues the tradition set by the larger Galileo teams earlier in the mission who overcame challenging setbacks to keep the mission a success."

Playback and transmission began late last week, after tape movements earlier in the week positioned the tape to start the download with the data of greatest scientific interest. That information is from a period starting on Nov. 4, when Galileo was beginning to get closer to Jupiter than the moon Io's orbit. It ends when the spacecraft shut down its instruments on Nov. 5 as part of a precautionary standby reaction to other radiation-induced problems with the spacecraft's computer shortly after passing the inner moon Amalthea.

"We hope this will be the best data set that's ever been collected about the inner region of Jupiter's magnetic environment," said JPL's Dr. Torrence Johnson, Galileo project scientist. The tape playback may also provide recorded information about dust particles that form Jupiter's faint "gossamer" ring, which Galileo flew through on Nov. 5.

The recovery was achieved by running a current through the damaged diode to anneal, or repair, radiation-caused damage. The first annealing attempt of six hours produced barely discernible improvement. Three additional treatments, for a total of 83 more hours of annealing treatment, produced progressive improvements, to the point that the tape recorder can run for about an hour at a time. A fifth treatment produced no additional gain. However, normal playback runs the tape recorder for only a few minutes at a time, so the improvement appears sufficient, said JPL engineer Greg Levanas, who helped plot the recovery strategy.

The flight team plans to continue playback until mid-January, the scheduled end of Galileo's mission operations.

Galileo's tape recorder became critical to the mission's strategy for handling science data after the spacecraft's main antenna failed to open fully during the journey from launch in 1989 to arrival at Jupiter in 1995. Most information from onboard science instruments has been recorded onto tape during the busy days when the spacecraft has flown near one of Jupiter's moons. There have been over 30 such flybys since 1995. The recorded data has been played back slowly for transmission to Earth via Galileo's smaller secondary antenna during the weeks and months before each subsequent flyby.

Galileo has operated five years longer than its original prime mission and has received more than four times the cumulative dose of harmful radiation it was designed to withstand. Last month's encounter took the orbiter nearly twice as close to Jupiter as it had ever been before, and exposed it to the strongest radiation it has yet experienced. In particular, the spacecraft entered the most intense region of a trapped proton belt and was exposed to 40 times the proton radiation of any single previous passage close to Jupiter, probably more than the rest of the mission combined.

The diode that radiation apparently damaged in the tape recorder is a gallium-arsenide semiconductor component that emits light. The motor-drive control has three of them. Light from them shines through windows in a rotating wheel onto detectors on the other side of the wheel. That setup senses the turning of the wheel and feeds digital logic that controls drive signals for the motor.

The damage apparently came from high-energy protons from Jupiter's radiation belt displacing atoms in the semiconductor's crystalline molecular lattice. Passing a current through the diode for hours serves as a way for electron flow to cause some of the displaced atoms to shift back to their original lattice positions.

Galileo has nearly depleted its supply of the propellant needed for pointing its antenna toward Earth and controlling its flight path. While still controllable, it has been put on a course for impact into Jupiter next September. The maneuver prevents the risk of Galileo drifting to an unwanted impact with the moon Europa, where it has discovered evidence of a subsurface ocean that is of interest as a possible habitat for extraterrestrial life.

Additional information about Galileo and the discoveries is available at http://galileo.jpl.nasa.gov. JPL, a division of the California Institute of Technology in Pasadena, manages the Galileo mission for NASA's Office of Space Science, Washington, D.C.
High resolution JPEG (795 KB)
Galileo site