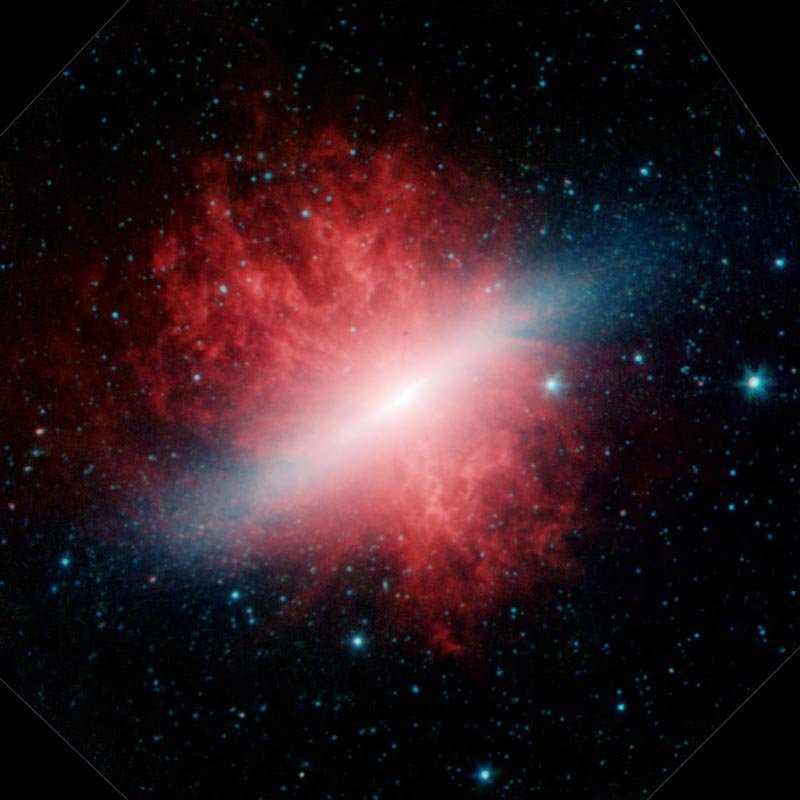 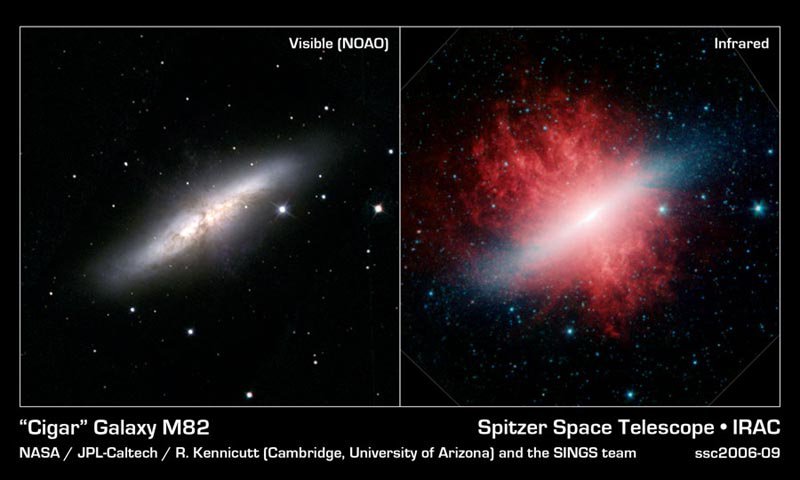 The visible-light picture of the Cigar galaxy shows only a bar of light against a dark patch of space. Click on browse image for a visible/infrared comparison.
Credit: NASA/JPL-Caltech/University of Arizona/NOAO

Where there's smoke, there's fire - even in outer space.

Where there's smoke, there's fire - even in outer space. A new infrared image from NASA's Spitzer Space Telescope shows a burning hot galaxy whose fiery stars appear to be blowing out giant billows of smoky dust.

The galaxy, called Messier 82, or the "Cigar galaxy," was previously known to host a hotbed of young, massive stars. The new Spitzer image reveals, for the first time, the "smoke" surrounding those stellar fires.

"We've never seen anything like this," said Dr. Charles Engelbracht of the University of Arizona, Tucson. "This unusual galaxy has ejected an enormous amount of dust to cover itself with a cloud brighter than any we've seen around other galaxies."

The false-colored view, online at http://www.spitzer.caltech.edu/Media , shows Messier 82, an irregular-shaped galaxy positioned on its side, as a diffuse bar of blue light. Fanning out from its top and bottom like the wings of a butterfly are huge red clouds of dust believed to contain a compound similar to car exhaust.

The smelly material, called polycyclic aromatic hydrocarbon, can be found on Earth in tailpipes, barbecue pits and other places where combustion reactions have occurred. In galaxies, the stuff is created by stars, whose winds and radiation blow the material out into space.

"Usually you see smoke before a fire, but we knew about the fire in this galaxy before Spitzer's infrared eyes saw the smoke," said Dr. David Leisawitz, Spitzer program scientist at NASA Headquarters in Washington.

These hazy clouds are some of the biggest ever seen around a galaxy. They stretch out 20,000 light-years away from the galactic plane in both directions, far beyond where stars are found.

Previous observations of Messier 82 had revealed two cone-shaped clouds of very hot gas projecting outward below and above the center of galaxy. Spitzer's sensitive infrared vision allowed astronomers to see the galaxy's dust.

"Spitzer showed us a dust halo all around this galaxy," said Engelbracht. "We still don't understand why the dust is all over the place and not cone-shaped."

Cone-shaped clouds of dust around this galaxy would have indicated that its central, massive stars had sprayed the dust into space. Instead, Engelbracht and his team believe stars throughout the galaxy are sending off the "smoke signals."

Messier 82 is located about 12 million light-years away in the Ursa Major constellation. It is undergoing a renaissance of star birth in its middle age, with the most intense bursts of star formation taking place at its core. The galaxy's interaction with its neighbor, a larger galaxy called Messier 81, is the cause of all the stellar ruckus. Our own Milky Way galaxy is a less hectic place, with dust confined to the galactic plane.

The Jet Propulsion Laboratory manages the Spitzer Space Telescope mission for NASA's Science Mission Directorate, Washington. Science operations are conducted at the Spitzer Science Center at Caltech. JPL is a division of Caltech.