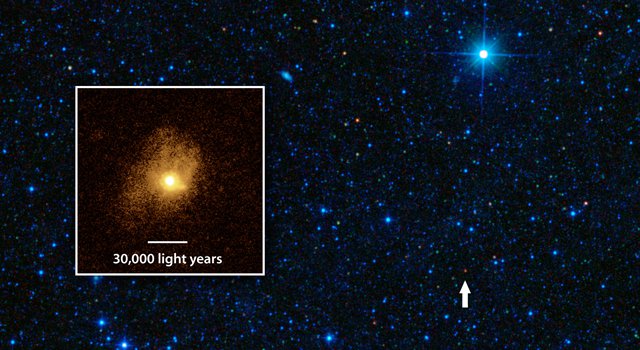 The tiny red spot in this image is one of the most efficient star-making galaxies ever observed, converting gas into stars at the maximum possible rate. The galaxy is shown here in an image from NASA's Wide-field Infrared Survey Explorer (WISE), which first spotted the rare galaxy in infrared light.› Full image and caption
Credit: NASA/JPL-Caltech/STScI/IRAM

Astronomers have spotted the most efficient maker of stars yet, a galaxy undergoing a rare phase of evolution.

Astronomers have spotted the "greenest" of galaxies, one that converts fuel into stars with almost 100-percent efficiency.

"This galaxy is remarkably efficient," said Jim Geach of McGill University in Canada, lead author of a new study appearing in the Astrophysical Journal Letters. "It's converting its gas supply into new stars at the maximum rate thought possible."

Stars are formed out of collapsing clouds of gas in galaxies. In a typical galaxy, like the Milky Way, only a fraction of the total gas supply is actively forming stars, with the bulk of the fuel lying dormant. The gas is distributed widely throughout the galaxy, with most of the new stars being formed within discrete, dense 'knots' in the spiral arms.

In the galaxy, called SDSSJ1506+54, nearly all of the gas has been driven to the central core of the galaxy, where it has ignited in a powerful burst of star formation.

"We are seeing a rare phase of evolution that is the most extreme -- and most efficient -- yet observed," said Geach.

The results will provide a better understanding of how the central star-forming regions of galaxies take shape.

SDSSJ1506+54 jumped out at the researchers when they looked at it using data from WISE's all-sky infrared survey. Infrared light is pouring out of the galaxy, equivalent to more than a thousand billion times the energy of our sun. The galaxy is so distant it has taken the light nearly six billion years to reach us.

"Because WISE scanned the entire sky, it detected rare galaxies like this one that stand out from the rest," said Ned Wright of UCLA, the WISE principal investigator.

Hubble's visible-light observations revealed that the galaxy is extremely compact, with most of its light emanating from a region just a few hundred light-years across. That's a big star-making punch for such a little size.

"While this galaxy is forming stars at a rate hundreds of times faster than our Milky Way galaxy, the sharp vision of Hubble revealed that the majority of the galaxy's starlight is being emitted by a region with a diameter just a few percent that of the Milky Way," said Geach.

The team then used the IRAM Plateau de Bure Interferometer to measure the amount of gas in the galaxy. The ground-based telescope detected millimeter-wave light coming from carbon monoxide, an indicator of the presence of hydrogen gas, which is fuel for stars. Combining the rate of star formation derived with WISE, and the gas mass measured by IRAM, the scientists get a measure of the star-formation efficiency.

In regions of galaxies where new stars are forming, parts of gas clouds are collapsing due to gravity. When the gas is dense enough to squeeze atoms together and ignite nuclear fusion, a star is born. But this process can be halted by other newborn stars, as their winds and radiation blow the gas outward. The point at which this occurs sets the theoretical maximum for star formation. The galaxy SDSSJ1506+54 was found to be making stars right at this point, just before the gas clouds would otherwise be blown apart.

"We see some gas outflowing from this galaxy at millions of miles per hour, and this gas may have been blown away by the powerful radiation from the newly formed stars," said Ryan Hickox, an astrophysicist at Dartmouth College, Hanover, N.H., and a co-author on the study.

Why is SDSSJ1506+54 so unusual? Astronomers say they're catching the galaxy in a short-lived phase of evolution, possibly triggered by the merging of two galaxies into one. The star formation is so prolific that in a few tens of millions of years, the blink of an eye in a galaxy's life, the gas will be used up, and SDSSJ1506+54 will mature into a massive elliptical galaxy.