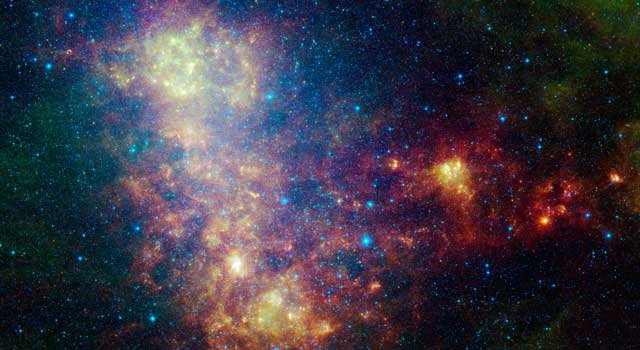 The infrared portrait of the Small Magellanic Cloud, taken by NASA's Spitzer Space Telescope, reveals the stars and dust in this galaxy as never seen before. › Full image and caption 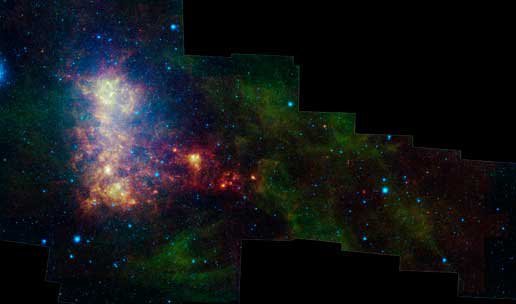 The image shows the main body of the Small Magellanic Cloud, which is comprised of the "bar" and "wing" on the left and the "tail" extending to the right. The bar contains both old stars (in blue) and young stars lighting up their natal dust (green/red). › Full image and caption 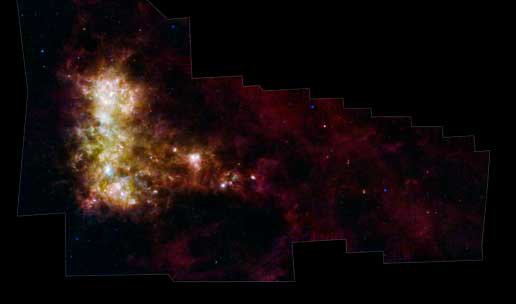 The infrared portrait of the Small Magellanic Cloud, taken by NASA's Spitzer Space Telescope, reveals the stars and dust in this galaxy as never seen before. › Full image and caption

NASA's Spitzer Space Telescope has captured an action-packed picture of the nearby Small Magellanic Cloud, a small galaxy that looks like a wispy cloud when seen from Earth.

NASA's Spitzer Space Telescope has captured an action-packed picture of the nearby Small Magellanic Cloud, a small galaxy that looks like a wispy cloud when seen from Earth.

From Spitzer's perch up in space, the galaxy's clouds of dust and stars come into clear view. The telescope's infrared vision reveals choppy piles of recycled stardust -- dust that is being soaked up by new star systems and blown out by old ones.

To some people, the new view might resemble a sea creature, or even a Rorschach inkblot test. But to astronomers, it offers a unique opportunity to study the whole life cycle of stars close-up. The image is available online at http://www.nasa.gov/AAS and http://www.jpl.nasa.gov/aas .

"It's quite the treasure trove," said Karl Gordon, the principal investigator of the latest Spitzer observations at the Space Telescope Science Institute in Baltimore, Md. "Because this galaxy is so close and relatively large, we can study all the various stages and facets of how stars form in one environment."

Recent research has shown that the galaxies may not, as previously suspected, orbit around the Milky Way. Instead, they are thought to be merely sailing by, destined to go their own way. Astronomers say the two galaxies, which are both less evolved than a galaxy like ours, were triggered to create bursts of new stars by gravitational interactions with the Milky Way and with each other. In fact, the Large Magellanic Cloud may eventually consume its smaller companion.

Gordon and his team are interested in the Small Magellanic Cloud not only because it is so close and compact, but also because it is very similar to young galaxies thought to populate the universe billions of years ago. The Small Magellanic Cloud has only one-fifth the amount of heavier elements, such as carbon, contained in the Milky Way, which means that its stars haven't been around long enough to pump large amounts of these elements back into their environment. Such elements were necessary for life to form in our solar system.

Studies of the Small Magellanic Cloud therefore offer a glimpse into the different types of environments in which stars form.

The new Spitzer observations were presented today at the 215th meeting of the American Astronomical Society in Washington. They reveal the galaxy's youngest stars embedded in thick dust, in addition to the older stars, which spit the dust out. Taken together with visible-light observations, these Spitzer data help provide a census of the whole stellar population.

"With Spitzer, we are pinpointing how to best calculate the numbers of new stars that are forming right now," said Gordon. "Observations in the infrared give us a view into the birthplace of stars, unveiling the dust-enshrouded locations where stars have just formed."

Infrared light is color-coded in the new picture, so that blue shows older stars, green shows organic dust and red highlights dust-enshrouded star formation. Light encoded in blue has a wavelength of 3.6 microns; green is 8.0 microns; and red is 24 microns. This image was taken before Spitzer ran out of its liquid coolant in May 2009 and began its "warm" mission.

Other collaborators include: M. Meixner, M, Sewilo and B. Shiao of the Space Telescope Science Institute; M. Meade, B. Babler, S. Bracker of the University of Wisconsin at Madison; C. Engelbracht, M. Block, K. Misselt of the University of Arizona, Tucson; R. Indebetouw of the University of Virginia, Charlottesville; and J. Hora and T. Robitaille of the Harvard Smithsonian Center for Astrophysics, Cambridge, Mass.

The image includes Spitzer observations taken previously by a team led by Alberto Bolatto of the University of Maryland, College Park.