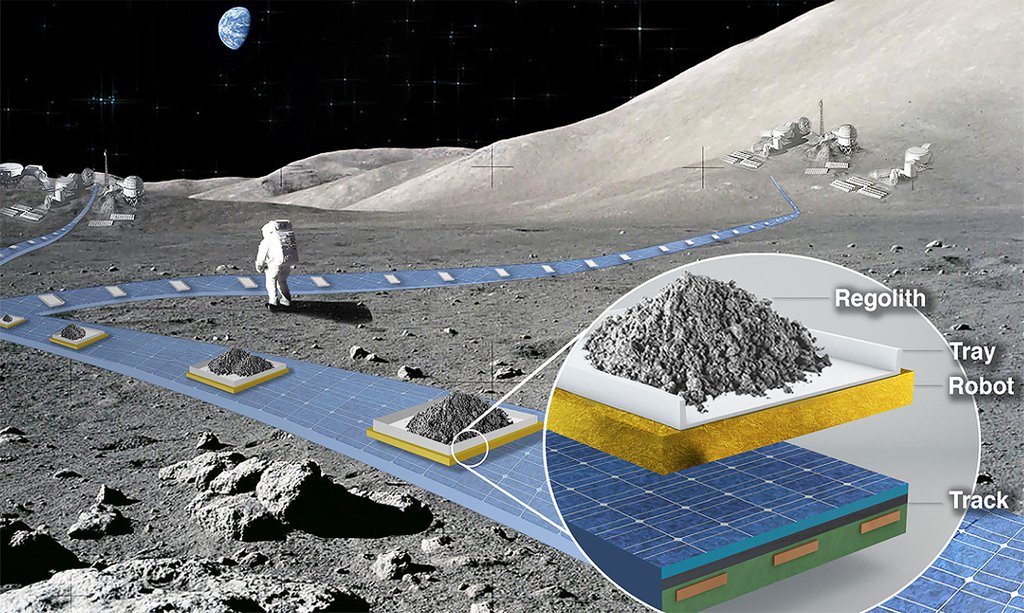 This illustration shows a conceptual lunar railway system called FLOAT (Flexible Levitation on a Track) that has been selected for an early-stage feasibility study within the NASA Innovative Advanced Concepts program.

Four advanced space concepts from NASA’s Jet Propulsion Laboratory have been selected to receive grants for further research and development.

“NIAC Fellows are known to dream big, proposing technologies that may appear to border science fiction and are unlike research being funded by other agency programs,” said Jenn Gustetic, director of early-stage innovations and partnerships within NASA’s Space Technology Mission Directorate (STMD). “We don’t expect them all to come to fruition but recognize that providing a small amount of seed-funding for early research could benefit NASA greatly in the long run.”

For 2021, STMD selected 16 Phase I NIAC proposals, which offer a range of inventions and applications. Each selected proposal will receive a grant from NASA up to $125,000. If their initial 9-month feasibility studies are successful, NIAC Fellows can apply for Phase II awards. All NIAC studies, regardless of phase, are early-stage technology development efforts. They are not considered and may never become NASA missions.

Among the selections is a robotics engineer at NASA’s Jet Propulsion Laboratory in Southern California, offering an infrastructure idea for autonomously transporting cargo on the Moon using magnetic robots that would levitate over a flexible track. The tracks would unroll on the lunar surface, forgoing major on-site construction associated with building roads and railways on Earth. The Fellow will research another NIAC Phase I study in parallel: swimming micro-robots for exploring ocean worlds.

A researcher at NASA’s Langley Research Center in Hampton, Virginia, will look into a concept for generating and distributing power on the Moon. The “light bender” system would capture, concentrate, and focus sunlight using telescope optics.

An industry-based researcher with Trans Astronautica Corporation proposed a conceptual method for making soil in space using carbon-rich asteroids and fungi. The concept suggests the fungi would break down the material and turn it into soil to grow food and sustain large-scale deep-space habitats.

An assistant professor at Carnegie Mellon University will investigate a lightweight and deployable structure design to allow for kilometer-scale structures in space. The proposal suggests the structure could serve as the backbone of a large rotating spacecraft capable of producing artificial gravity.

“There is an overwhelming number of new participants in the program this year,” said NIAC Program Executive Jason Derleth. “All but two of the researchers selected for Phase I awards will be first-time NIAC grant recipients, showing NASA’s early-stage opportunities continue to engage new creative thinkers from all over the country.”

The complete list of researchers selected to receive NIAC Phase I grants in 2021 and the titles of their proposals are:

FLOAT: Flexible Levitation on a Track

Making Soil for Space Habitats by Seeding Asteroids with Fungi