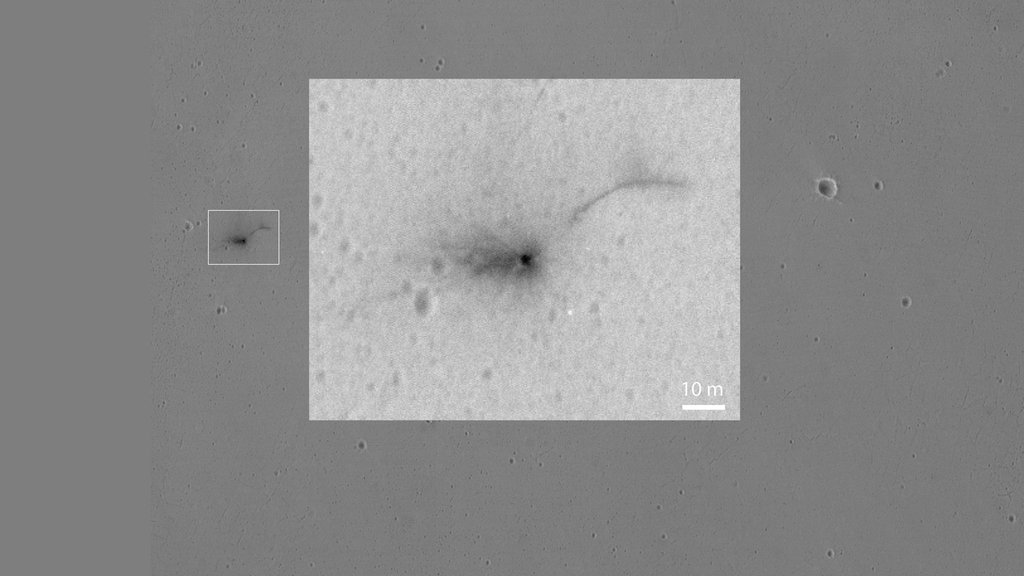 This Oct. 25, 2016, image from the HiRISE camera on NASA's Mars Reconnaissance Orbiter shows the area where the Europe's Schiaparelli test lander struck Mars, with magnified insets of three sites where spacecraft components hit the ground. It adds detail not seen in earlier imaging of the site.› Full image and caption
Credit: NASA/JPL-Caltech/Univ. of Arizona

The most powerful telescope orbiting Mars is providing new details of the scene near the Martian equator where Europe's Schiaparelli test lander hit the surface last week.

An Oct. 25 observation using the High Resolution Imaging Science Experiment (HiRISE) camera on NASA's Mars Reconnaissance Orbiter shows three impact locations within about 0.9 mile (1.5 kilometers) of each other. An annotated view is available online at

The scene shown by HiRISE includes three locations where hardware reached the ground. A dark, roughly circular feature is interpreted as where the lander itself struck. A pattern of rays extending from the circle suggests that a shallow crater was excavated by the impact, as expected given the premature engine shutdown. About 0.8 mile (1.4 kilometers) eastward, an object with several bright spots surrounded by darkened ground is likely the heat shield. About 0.6 mile (0.9 kilometer) south of the lander impact site, two features side-by-side are interpreted as the spacecraft's parachute and the back shell to which the parachute was attached. Additional images to be taken from different angles are planned and will aid interpretation of these early results.

The test lander is part of the European Space Agency's ExoMars 2016 mission, which placed the Trace Gas Orbiter into orbit around Mars on Oct. 19. The orbiter will investigate the atmosphere and surface of Mars and provide relay communications capability for landers and rovers on Mars.

Data transmitted by Schiaparelli during its descent through Mars' atmosphere is enabling analysis of why the lander's thrusters switched off prematurely. The new HiRISE imaging provides additional information, with more detail than visible in an earlier view with the Context Camera (CTX) on the Mars Reconnaissance Orbiter.

With HiRISE, CTX and four other instruments, the Mars Reconnaissance Orbiter has been investigating Mars since 2006.