From NASA JPL's Mailroom to Mars and Beyond 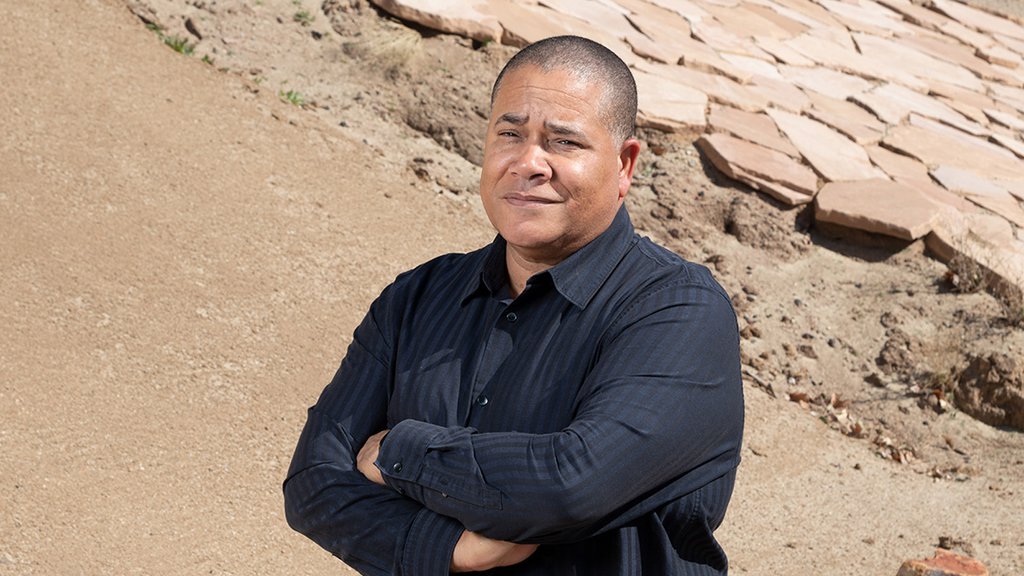 Bill Allen has thrived as the mechanical systems design lead for three Mars rover missions, but he got his start as a teenager sorting letters for the NASA center.

Allen was just 17 years old when he first set foot on the grounds of NASA's Jet Propulsion Laboratory to join the mailroom in the summer of 1981. Voyager had recently encountered Saturn, and the Lab was crawling with members of the media.

"It was like walking into a football stadium in the middle of the touchdown. It was electric," he says. "This is something that doesn't go on anywhere else in the world, and to be immersed in it with your first footsteps was crazy. That alone was awe-inspiring."

Cut to 2020, and the veteran mechanical engineer has been with JPL for more than 35 years. As someone who's often tapped to be part of high-stakes problem-solving "tiger teams," he's worked as the systems design lead for the Mars Exploration rovers Spirit and Opportunity, Curiosity, and the soon-to-land Mars Perseverance rover - each mission more challenging than the last.

The size of a small SUV, Curiosity dwarfed Spirit and Opportunity, landing via the mind-boggling "sky crane" maneuver, in which a descent stage lowers the rover onto Mars. With Perseverance, the team had to "grow the rover" more, Allen says, to accommodate a whole new suite of instruments and the intricate system the rover will rely on to take samples from Mars and deposit them in tubes for a future mission to return to Earth.

"We took on the most complicated mission we've ever done while we're changing our infrastructure," he says. "This is like fixing your car while you're driving it."

While Allen's initiation at JPL may have been dizzying, his high school years were hardly a foreshadowing of the success to come. "The first two years of high school, I was never in the mindset of what I wanted to do," he says.

Allen grew up in West Los Angeles, the middle child of five siblings. His mother was a child development specialist, and his father owned and operated a landscaping business. In his youth, he was "always tinkering with things," Allen says. "I would take apart anything and everything. Whatever my parents gave me, such as bikes, I demolished. I would take it apart, modify it, make it better."

It was only at the end of his junior year that Allen began thinking about life after high school. That's when he decided to study engineering. But there was lost ground to cover. "Most students had already decided," he says. "They had taken much more advanced math and were further along than me, so I took summer classes to catch up."

Allen wound up at JPL only by serendipity. His uncle, who worked at JPL in electronic packaging, saw a job listing for the Lab's mailroom and suggested his nephew apply as a way to earn extra money the summer before college. "I didn't even know what JPL was," Allen says. 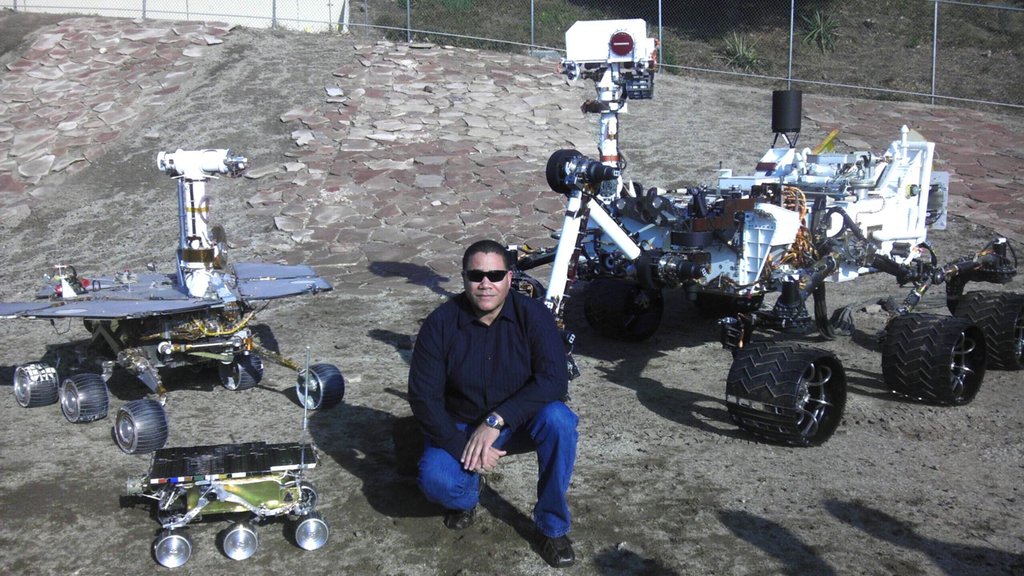 Allen with engineering models of the (clockwise from bottom) Sojourner rover, a Mars Exploration Rover, and Curiosity in JPL's Mars Yard in the early 2000's.

But he was a quick learner. Early in the mornings, he would sort the mail, then jump into the mailroom's Jeep and deliver throughout the day on JPL's sprawling grounds. (This was before the days of email and there was, he says, a lot of mail.) That was all he needed: "When I saw what was going on here that first summer, I wanted to come back."

That fall, Allen left to study engineering physics at Oregon State University, but he landed a spot two years later in a new program at JPL: a six-month co-op - similar to today's internship program - with 20 other students. "It was quite frankly amazing," he says of the experience. "We were treated like assets."

The co-op included weekly field trips, such as visits to Edwards Air Force Base to watch shuttle launches, booster tests, and experimental crash landings. It wasn't unusual for an astronaut or lead scientist to drop in for a talk with the students.

Students were also assigned hands-on tasks that were integral to the flight hardware and that spurred creative thinking. Allen helped to redesign Galileo's mounting for its star scanner, which uses the position of stars to help the spacecraft navigate.

After his co-op ended, Allen would return to JPL to spend all his school holidays co-oping. When Allen graduated in 1986, he had an offer waiting for him: a full-time position at JPL as a mechanical design engineer.

Allen dove headfirst into major tasks early on at JPL, such as the development of the 70-meter Deep Space Network antenna and 34-meter waveguide beam designs, as well as mission support for Galileo. He wound up working on Cassini for 10 years, seeing it through the design cycle from start to finish.

"It was very fulfilling to work on a dedicated project," he says, calling Cassini "the last of the old-school projects," where the design of a major mission could take 10 or more years.

Allen soon found himself with the near-impossible job of helping to design a rover that would fit inside the Mars Pathfinder lander and then unfold itself on Mars. And it needed to be designed in record time: three years.

To meet the deadline, the team pitched reusing the architecture of Mars Pathfinder, which had successfully landed and deployed the first Mars rover, Sojourner, in July 1997. Not only did NASA end up selecting their proposal, but also requesting two rovers - what would become the Mars Exploration Rovers Spirit and Opportunity.

Over the next three years, a team of managers, engineers, and technicians pushed through high stress levels and around-the-clock work schedules to complete the rovers, an experience Allen describes as one of the most challenging - and rewarding - endeavors he's taken on.

"Those rovers had my blood, tears, soul, and DNA," Allen says. "To have them touch down on another planet was as surreal as it gets."

While those twin Mars Exploration Rovers (MER) tested JPL's ability to produce a rover in a short time period, the Curiosity rover - originally known as Mars Science Laboratory (MSL) - came with its own challenges.

"Going from MER to MSL was a quantum leap," Allen says. "MER was re-cooked from Pathfinder, but MSL was as close to a clean slate as you can get. We knew how to design rovers, but this one was going to be much bigger and do much more."

Of course, a clean slate meant a whole new slate of problems. Well after the design implementation, the team learned that there was an unexpected issue with the exhaust plume from the thrusters used during descent and landing.

The mission set up a "tiger team" to find a solution and asked Allen to join. "When a problem arises on a mission," he explains, "they put together a team of highly focused individuals; it's cross-talent. Those are always the ones I enjoy the most."

Over the next year and a half, the tiger team met "anywhere and everywhere" to understand the problem, trade concepts to solve the problem, and then to validate the concepts.

On Mars in 2014, after the MSL descent stage lowered Curiosity with cables onto the surface of Mars via the sky crane maneuver, Allen remembers the feeling of awe that it all worked out.

"We looked at everything we had done and thought, 'This is the craziest thing we've done so far.' It was super-challenging, all the things that had to come together to make this work."

Allen watched the landing from Beckman Auditorium at Caltech, which manages JPL for NASA. "There were a lot of tears," he recalls. "I was with the people I spent time in the trenches with to take in the landing, and you could tell everybody had the same reactions - it was deeper than words can provide."

After being part of JPL's most historic Mars explorers, Allen felt ready to find challenges beyond rovers. But then he learned more about the Mars 2020 mission and was intrigued: The Mars 2020 team (the rover hadn't yet been named Perseverance) would need to preserve the architecture of Curiosity but create a new design for the rover, which would collect the first samples from another planet to be returned to Earth on a future mission.

On paper, the idea sounded good, but the reality of a whole new suite of instruments turned out to be far more difficult. The work could often feel as terrifying as it was exhilarating. "A problem can pop up anytime," Allen says. "Someone wakes up at 3 a.m. with a nightmare they didn't consider and boom, we go look at it."

But Allen never loses sight of the joy behind the work.

"Bill is a glass-is-always-half-full kind of guy, even if it's got two drops of water in it," says Randy Lindemann, who has worked with Allen for more than 23 years. "He's got the most positive, upbeat attitude of anybody I've ever worked with at JPL."

Now, as Perseverance prepares to land on the Red Planet on Feb. 18, 2021, he's already working his next challenge: helping design the Mars Sample Retrieval Lander.

But while Allen thrives on the challenge, that's not necessarily what keeps him going.

"If I could summarize the best thing that's happened to me from being at JPL, it's working with such brilliant minds," he says. "When you consider we do what no one else is doing on the planet, the problems are unique and sometimes the solutions are as well. To be in the mix of those minds to solve some of these problems - it's been extraordinary."