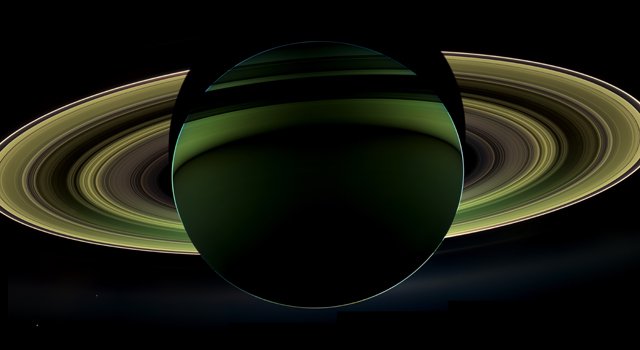 NASA's Cassini spacecraft has delivered a glorious view of Saturn, taken while the spacecraft was in Saturn's shadow. The cameras were turned toward Saturn and the sun so that the planet and rings are backlit.› Full image and caption
Credit: NASA/JPL-Caltech/Space Science Institute

Just in time for the holidays, NASA's Cassini spacecraft, in orbit around Saturn for more than eight years, has delivered another glorious view of the planet Saturn and its rings.

PASADENA, Calif -- Just in time for the holidays, NASA's Cassini spacecraft, in orbit around Saturn for more than eight years now, has delivered another glorious, backlit view of the planet Saturn and its rings.

On Oct. 17, 2012, during its 174th orbit around the gas giant, Cassini was deliberately positioned within Saturn's shadow, a perfect location from which to look in the direction of the sun and take a backlit view of the rings and the dark side of the planet. Looking back towards the sun is a geometry referred to by planetary scientists as "high solar phase;" near the center of your target's shadow is the highest phase possible. This is a very scientifically advantageous and coveted viewing position, as it can reveal details about both the rings and atmosphere that cannot be seen in lower solar phase.

The last time Cassini had such an unusual perspective on Saturn and its rings, at sufficient distance and with sufficient time to make a full system mosaic, occurred in September 2006, when it captured a mosaic, processed to look like natural color, entitled "In Saturn's Shadow" (http://www.jpl.nasa.gov/spaceimages/details.php?id=PIA08329). In that mosaic, planet Earth put in a special appearance, making "In Saturn's Shadow" one of the most popular Cassini images to date.

The mosaic being released today by the mission and the imaging team, in celebration of the 2012 holiday season, does not contain Earth; along with the sun, our planet is hidden behind Saturn. However, it was taken when Cassini was closer to Saturn and therefore shows more detail in the rings than the one taken in 2006.

The new processed mosaic, composed of 60 images taken in the violet, visible and near infrared part of the spectrum, can be found at http://www.nasa.gov/cassini , http://saturn.jpl.nasa.gov and http://ciclops.org .

"Of all the many glorious images we have received from Saturn, none are more strikingly unusual than those taken from Saturn's shadow," said Carolyn Porco, Cassini's imaging team lead based at the Space Science Institute in Boulder, Colo.