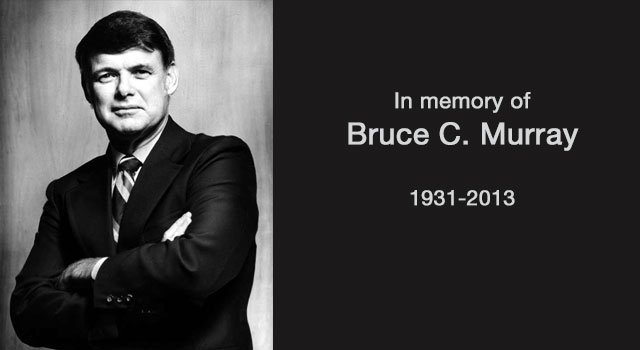 Former JPL Director Bruce C. Murray died today at the age of 81 after a long illness.

Murray was at the helm of JPL from 1976 to 1982, during a very busy time for planetary exploration - when the Viking spacecraft landed on Mars, and Voyager 1 and 2 were launched and flew by Jupiter and Saturn.

After leaving JPL, Murray was a professor of planetary science and geology at the California Institute of Technology in Pasadena, which manages JPL for NASA.

As JPL director, Murray faced a rapidly shrinking budget, along with the rest of NASA.

"He worked tirelessly to save our nation's planetary exploration capability at a tumultuous time when there was serious consideration for curtailing future missions," said current JPL Director Charles Elachi. "Long after returning to Caltech as a professor he continued to be an important voice in expressing the importance of space exploration."

During Murray's leadership, JPL launched Seasat, one of the earliest Earth-observing satellites; the Solar Mesosphere Explorer, an Earth-orbiting spacecraft that investigated the ozone in Earth's upper atmosphere; and Shuttle Imaging Radar-A, which flew aboard Space Shuttle Columbia as the first instrument to image Earth using radar pulses, rather than optical light, as illumination. He gained a substantial expansion of JPL's civil affairs program with a large solar energy research project funded by the Department of Energy.

In 1979, Murray joined with the late astronomer Carl Sagan and engineer Louis Friedman to found the Planetary Society, a membership-based nonprofit organization dedicated to exploring the solar system and expanding public advocacy for space exploration.

Even before becoming JPL director, Murray's association with JPL and Caltech was longstanding and deep-seated. He was a Caltech geologist and a key member of the Mariner 4 imaging team that captured the first close-up image of Mars in 1964. It was the first of four planetary missions in which he played a vital role as a scientist.

Murray earned a Ph.D. in geology at the Massachusetts Institute of Technology, Cambridge. In 1955, Murray worked as a geologist for Standard Oil until 1958, then served two years in the U.S. Air Force. He came to Caltech in 1960, initially working in planetary astronomy, and soon became part of the imaging science team for JPL's first two missions to Mars, Mariners 3 and 4. He served a similar role on Mariners 6, 7 and 9, using their imagery to begin constructing a geologic history for Mars.

Murray published more than 130 scientific papers and authored or co-authored seven books. After he retired as director in late 1982, Murray returned to Caltech's Geological and Planetary Sciences Division, and was later named an emeritus professor at the campus.

Flags at JPL have been lowered to half staff in honor of Murray.

He is survived by his wife, Suzanne Moss, five children and grandchildren.