For Climbing Robots, the Sky's the Limit

The climbing robot LEMUR rests after scaling a cliff in Death Valley, California. The robot uses special gripping technology that has helped lead to a series of new, off-roading robots that can explore other worlds.
Credit: NASA/JPL-Caltech 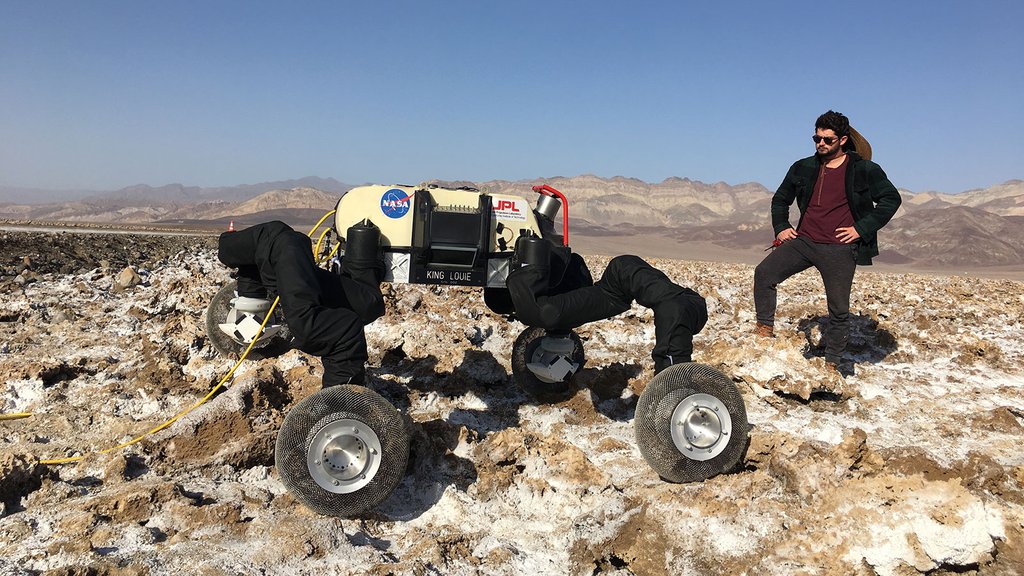 RoboSimian can walk on four legs, crawl, move like an inchworm and slide on its belly. In this photo it stands on the Devil's Golf Course in Death Valley, California, for field testing with engineer Brendan Chamberlain-Simon.
Credit: NASA/JPL-Caltech 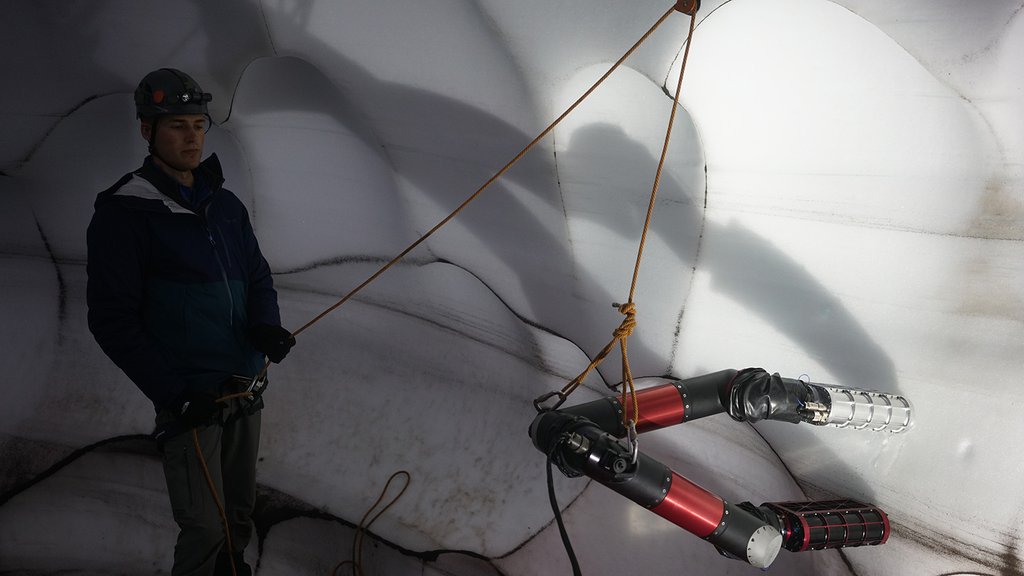 Ice Worm climbs an icy wall like an inchworm, an adaptation of LEMUR's design.
Credit: NASA/JPL-Caltech

A new generation of robots being developed by NASA's Jet Propulsion Laboratory can crawl, walk and even climb cliffs.

Robots can drive on the plains and craters of Mars, but what if we could explore cliffs, polar caps and other hard-to-reach places on the Red Planet and beyond? Designed by engineers at NASA's Jet Propulsion Laboratory in Pasadena, California, a four-limbed robot named LEMUR (Limbed Excursion Mechanical Utility Robot) can scale rock walls, gripping with hundreds of tiny fishhooks in each of its 16 fingers and using artificial intelligence (AI) to find its way around obstacles. In its last field test in Death Valley, California, in early 2019, LEMUR chose a route up a cliff while scanning the rock for ancient fossils from the sea that once filled the area.

LEMUR was originally conceived as a repair robot for the International Space Station. Although the project has since concluded, it helped lead to a new generation of walking, climbing and crawling robots. In future missions to Mars or icy moons, robots with AI and climbing technology derived from LEMUR could aid in the search for similar signs of life. Those robots are being developed now, honing technology that may one day be part of future missions to distant worlds. Here are five in the works:

A Mechanical Worm for Icy Worlds

How does a robot navigate a slippery, icy surface? For Ice Worm, the answer is one inch at a time. Adapted from a single limb of LEMUR, Ice Worm moves by scrunching and extending its joints like an inchworm. The robot climbs ice walls by drilling one end at a time into the hard surface. It can use the same technique to stabilize itself while taking scientific samples, even on a precipice. The robot also has LEMUR's AI, enabling it to navigate by learning from past mistakes. To hone its technical skills, JPL project lead Aaron Parness tests Ice Worm on glaciers in Antarctica and ice caves on Mount St. Helens so that it can one day contribute to science on Earth and more distant worlds: Ice Worm is part of a generation of projects being developed to explore the icy moons of Saturn and Jupiter, which may have oceans under their frozen crusts.

Robots can land on the Moon and drive on Mars, but what about the places they can't reach? Designed by engineers as NASA's Jet Propulsion Laboratory in Pasadena, California, a four-limbed robot named LEMUR (Limbed Excursion Mechanical Utility Robot) can scale rock walls, gripping with hundreds of tiny fishhooks in each of its 16 fingers and using artificial intelligence to find its way around obstacles. In its last field test in Death Valley, California, in early 2019, LEMUR chose a route up a cliff, scanning the rock for ancient fossils from the sea that once filled the area.

A Robotic Ape on the Tundra

Ice Worm isn't the only approach being developed for icy worlds like Saturn's moon Enceladus, where geysers at the south pole blast liquid into space. A rover in this unpredictable world would need to be able to move on ice and silty, crumbling ground. RoboSimian is being developed to meet that challenge.

Originally built as a disaster-relief robot for the Defense Advanced Research Projects Agency (DARPA), it has been modified to move in icy environments. Nicknamed "King Louie" after the character in "The Jungle Book," RoboSimian can walk on four legs, crawl, move like an inchworm and slide on its belly like a penguin. It has the same four limbs as LEMUR, but JPL engineers replaced its gripping feet with springy wheels made from music wire (the kind of wire found in a piano). Flexible wheels help King Louie roll over uneven ground, which would be essential in a place like Enceladus.

Micro-climbers are wheeled vehicles small enough to fit in a coat pocket but strong enough to scale walls and survive falls up to 9 feet (3 meters). Developed by JPL for the military, some micro-climbers use LEMUR's fishhook grippers to cling to rough surfaces, like boulders and cave walls. Others can scale smooth surfaces, using technology inspired by a gecko's sticky feet. The gecko adhesive, like the lizard it's named for, relies on microscopic angled hairs that generate van der Waals forces - atomic forces that cause "stickiness" if both objects are in close proximity.

Enhancing this gecko-like stickiness, the robots' hybrid wheels also use an electrical charge to cling to walls (the same phenomenon makes your hair stick to a balloon after you rub it on your head). JPL engineers created the gecko adhesive for the first generation of LEMUR, using van der Waals forces to help it cling to metal walls, even in zero gravity. Micro-climbers with this adhesive or gripping technology could repair future spacecraft or explore hard-to-reach spots on the Moon, Mars and beyond.

Just as astronauts train underwater for spacewalks, technology built for ocean exploration can be a good prototype for missions to places with nearly zero gravity. The Underwater Gripper is one of the gripping hands from LEMUR, with the same 16 fingers and 250 fishhooks for grasping irregular surfaces. It could one day be sent for operations on an asteroid or other small body in the solar system. For now, it's attached to the underwater research vessel Nautilus operated by the Ocean Exploration Trust off the coast of Hawaii, where it helps take deep ocean samples from more than a mile below the surface.

The small, solar-powered helicopter accompanying NASA's Mars 2020 rover will fly in short bursts as a technology demonstration, paving the way for future flying missions at the Red Planet. But JPL engineer Arash Kalantari isn't content to simply fly; he's developing a concept for a gripper that could allow a flying robot to cling to Martian cliffsides. The perching mechanism is adapted from LEMUR's design: It has clawed feet with embedded fishhooks that grip rock much like a bird clings to a branch. While there, the robot would recharge its batteries via solar panels, giving it the freedom to roam and search for evidence of life.