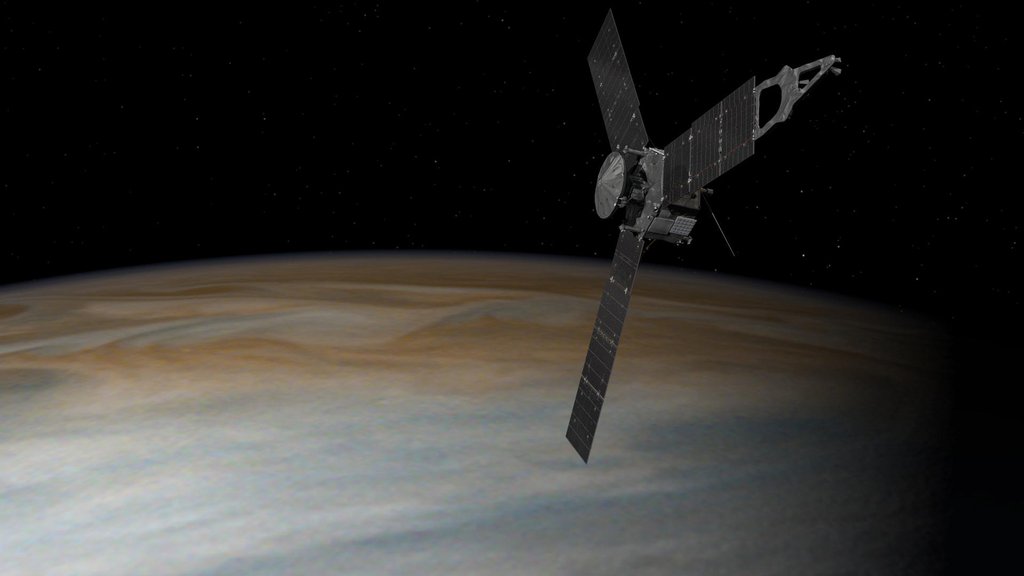 This artist's concept depicts the Juno spacecraft above Jupiter. The spacecraft will next fly by the planet on Aug. 27, in the mission's first up-close science pass.› Full image and caption
Credit: NASA/JPL-Caltech 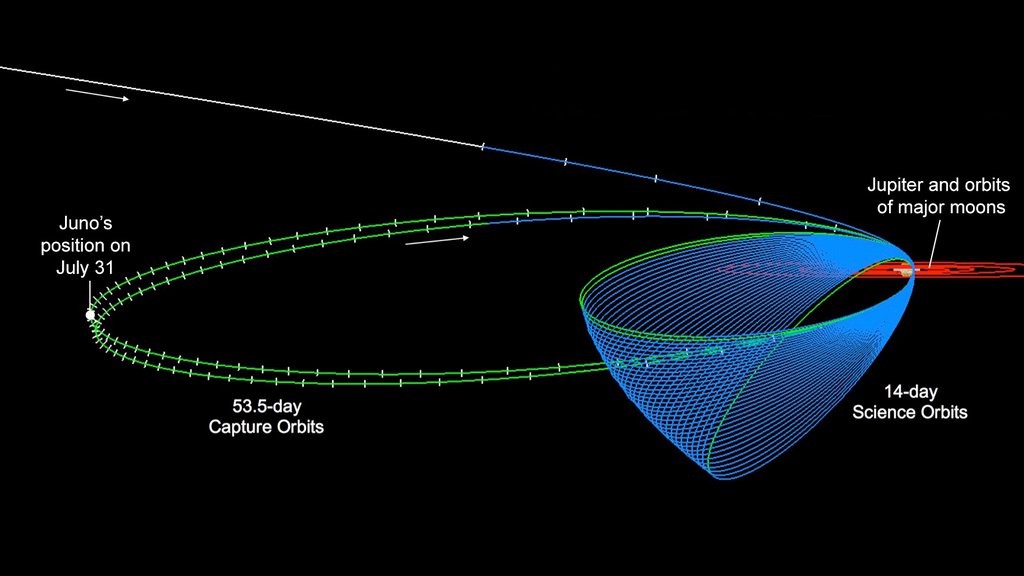 This diagram shows the Juno spacecraft's orbits, including its two long, stretched-out capture orbits. The spacecraft's position on July 31 is indicated at left.
Credit: NASA/JPL-Caltech

Five years after departing Earth, and a month after slipping into orbit around Jupiter, NASA's Juno spacecraft is nearing a turning point.

Five years after departing Earth, and a month after slipping into orbit around Jupiter, NASA's Juno spacecraft is nearing a turning point. On July 31 at 12:41 p.m. PDT (3:41 p.m. EDT), Juno will reach the farthest point in its orbit of Jupiter for the first time, known as "apojove," 5 million miles (8.1 million kilometers) from the giant planet. After that point, Jupiter's gravitational grip on Juno will cause the spacecraft to begin falling back toward the planet for another pass, this time with its scientific eyes wide open.

The spacecraft is currently executing the first of two long orbits prior to beginning its science mission. Each capture orbit is nearly two months long -- quite the wait for the mission's eager team of scientists -- but it's nothing compared to the long wait the team endured on the trek to Jupiter.

Juno launched on Aug. 5, 2011. The spacecraft took a long, looping path around the inner solar system to set up an Earth flyby, in which our planet's gravity flung the spinning probe onward toward Jupiter.

"For five years we've been focused on getting to Jupiter. Now we're there, and we're concentrating on beginning dozens of flybys of Jupiter to get the science we're after," said Scott Bolton, Juno principal investigator at Southwest Research Institute in San Antonio.

Juno arrived at Jupiter on July 4, firing its main rocket engine as planned for 35 minutes. The flawless maneuver allowed Jupiter's gravity to capture the solar powered spacecraft into the first of two 53.4-day-long orbits, referred to as capture orbits. Following the capture orbits, Juno will fire its engine once more to shorten its orbital period to 14 days and begin its science mission.

But before that happens, on Aug. 27, Juno must finish its first lap around Jupiter, with a finish line that represents the mission's closest pass over the gas giant. During the encounter, Juno will skim past Jupiter at a mere 2,600 miles (4,200 kilometers) above the cloud tops.

Juno's science instruments were turned off during orbit insertion, to simplify spacecraft operations during that critical maneuver. In contrast, all the instruments will be collecting data during the Aug. 27 pass, which serves as a trial run before the mission gets to work collecting the precious data it came for.

"We're in an excellent state of health, with the spacecraft and all the instruments fully checked out and ready for our first up-close look at Jupiter," said Rick Nybakken, Juno project manager at NASA's Jet Propulsion Laboratory, Pasadena, California.

With its powerful suite of science instruments, Juno will probe Jupiter's deep structure, atmospheric circulation and the high-energy physics of its magnetic environment. What Juno finds there will reveal important clues to Jupiter's formation and evolution, along with insights about how our planetary system and others are built.