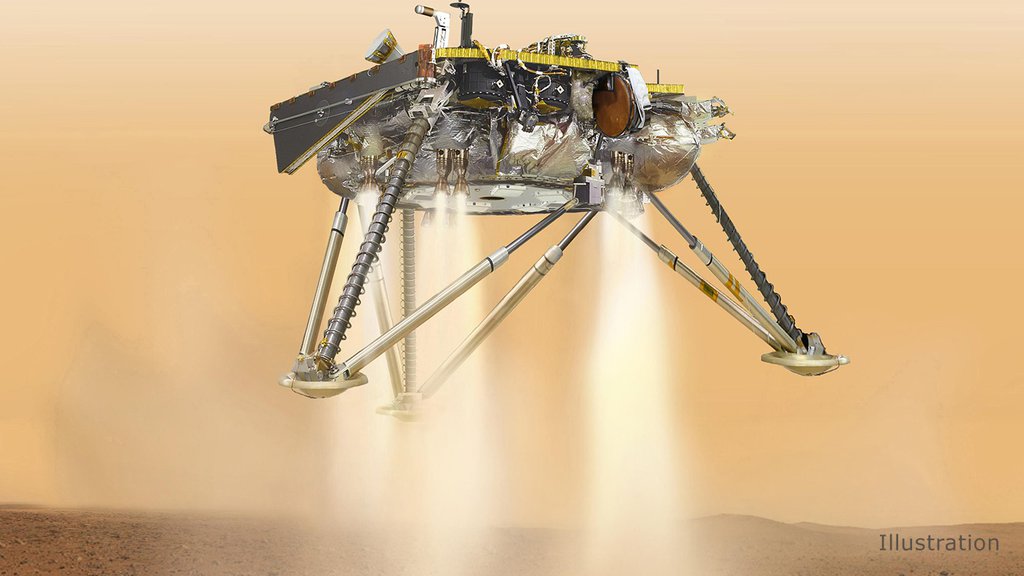 This is an illustration showing a simulated view of NASA's InSight lander about to land on the surface of Mars. This view shows the underside of the spacecraft.› Full image and caption
Credit: NASA/JPL-Caltech

NASA engineers will be holding their breath when their spacecraft heads into Mars' atmosphere on Nov. 26.

Every Mars landing is a knuckle-whitening feat of engineering. But each attempt has its own quirks based on where a spacecraft is going and what kind of science the mission intends to gather.

On Nov. 26, NASA will try to safely set a new spacecraft on Mars. InSight is a lander dedicated to studying the deep interior of the planet - the first mission ever to do so.

Here are a few things to know about InSight's landing.

Landing on Mars is hard

Only about 40 percent of the missions ever sent to Mars - by any space agency - have been successful. The U.S. is the only nation whose missions have survived a Mars landing. The thin atmosphere - just 1 percent of Earth's - means that there's little friction to slow down a spacecraft. Despite that, NASA has had a long and successful track record at Mars. Since 1965, it has flown by, orbited, landed on and roved across the surface of the Red Planet.

When NASA's InSight descends to the Red Planet on Nov. 26, 2018, it is guaranteed to be a white-knuckle event. Rob Manning, chief engineer at NASA's Jet Propulsion Laboratory, explains the critical steps that must happen in perfect sequence to get the robotic lander safely to the surface.

In 2008, NASA's Jet Propulsion Laboratory in Pasadena, California, successfully landed the Phoenix spacecraft at Mars' North Pole. InSight is based on the Phoenix spacecraft, both of which were built by Lockheed Martin Space in Denver. Despite tweaks to its heat shield and parachute, the overall landing design is still very much the same: After separating from a cruise stage, an aeroshell descends through the atmosphere. The parachute and retrorockets slow the spacecraft down, and suspended legs absorb some shock from the touchdown.

InSight is landing on "the biggest parking lot on Mars"

One of the benefits of InSight's science instruments is that they can record equally valuable data regardless of where they are on the planet. That frees the mission from needing anything more complicated than a flat, solid surface (ideally with few boulders and rocks). For the mission's team, the landing site at Elysium Planitia is sometimes thought as "the biggest parking lot on Mars."

InSight was built to land in a dust storm

InSight's engineers have built a tough spacecraft, able to touch down safely in a dust storm if it needs to. The spacecraft's heat shield is designed to be thick enough to withstand being "sandblasted" by dust. Its parachute has suspension lines that were tested to be stronger than Phoenix's, in case it faces more air resistance due to the atmospheric conditions expected during a dust storm.

The entry, descent and landing sequence also has some flexibility to handle shifting weather. The mission team will be receiving daily weather updates from NASA's Mars Reconnaissance Orbiter in the days before landing so that they can tweak when InSight's parachute deploys and when it uses radar to find the Martian surface.

After landing, InSight will provide new science about rocky planets

InSight will teach us about the interior of planets like our own. The mission team hopes that by studying the deep interior of Mars, we can learn how other rocky worlds, including Earth and the Moon, formed. Our home planet and Mars were molded from the same primordial stuff more than 4.5 billion years ago but then became quite different. Why didn't they share the same fate?

When it comes to rocky planets, we've only studied one in detail: Earth. By comparing Earth's interior to that of Mars, InSight's team members hope to better understand our solar system. What they learn might even aid the search for Earth-like exoplanets, narrowing down which ones might be able to support life. So while InSight is a Mars mission, it's also much more than a Mars mission.

You can read more about how the science of the mission is unique here. A press kit released today includes additional information on the mission.