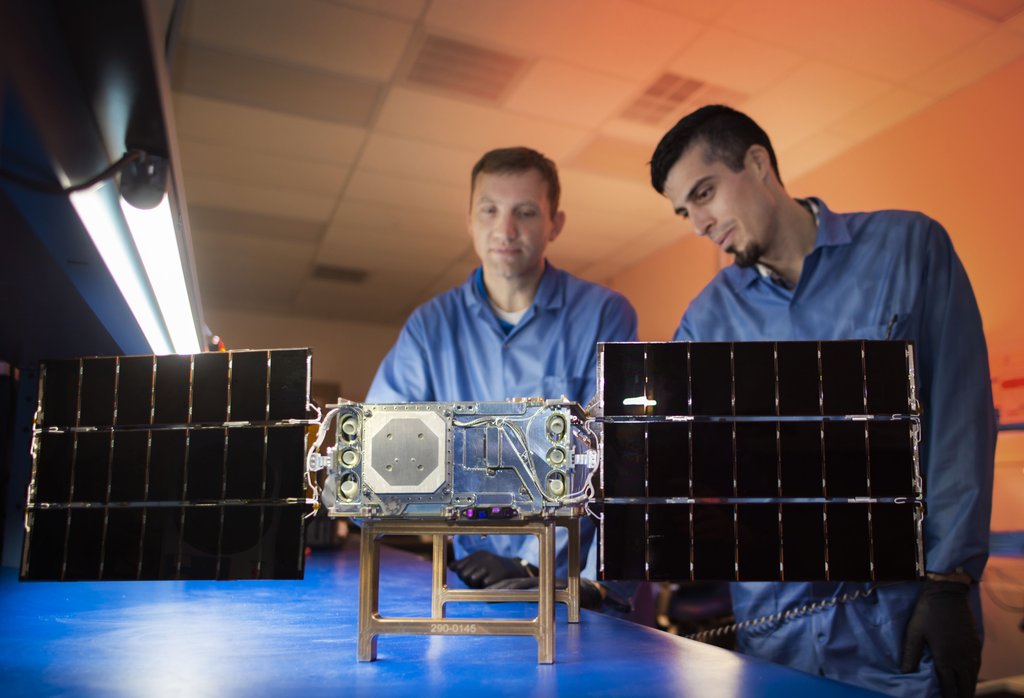 The first of six SunRISE SmallSats is shown here at a Utah State University Space Dynamics Laboratory clean room being worked on by engineers. Pointed toward the camera is the SmallSat’s Sun-facing side, including its fully deployed solar arrays.

Six of these small satellites will work together, creating the largest radio telescope ever launched to detect and track hazardous explosive space weather events.

Building a 6-mile-wide (10-kilometer-wide) telescope in space may sound like science fiction. But through the combined power of six toaster-size satellites, that’s what NASA’s SunRISE will be: a huge radio telescope in orbit that will help deepen scientists’ understanding of explosive space weather events. These phenomena generate particle radiation that can jeopardize astronauts and technology in space while also negatively impacting communications and power grids on Earth.

In anticipation of the planned 2024 launch of SunRISE – short for Sun Radio Interferometer Space Experiment – the first of those small satellites has already been completed at Utah State University Space Dynamics Laboratory (SDL) in Logan, which is contracted to build, test, and commission all six satellites for NASA.

“It’s really exciting to see the space vehicles coming together,” said Jim Lux, SunRISE project manager at NASA’s Jet Propulsion Laboratory in Southern California. “In a couple of years, these satellites will form a vast space telescope observing the Sun in a way that is impossible from Earth’s surface.” 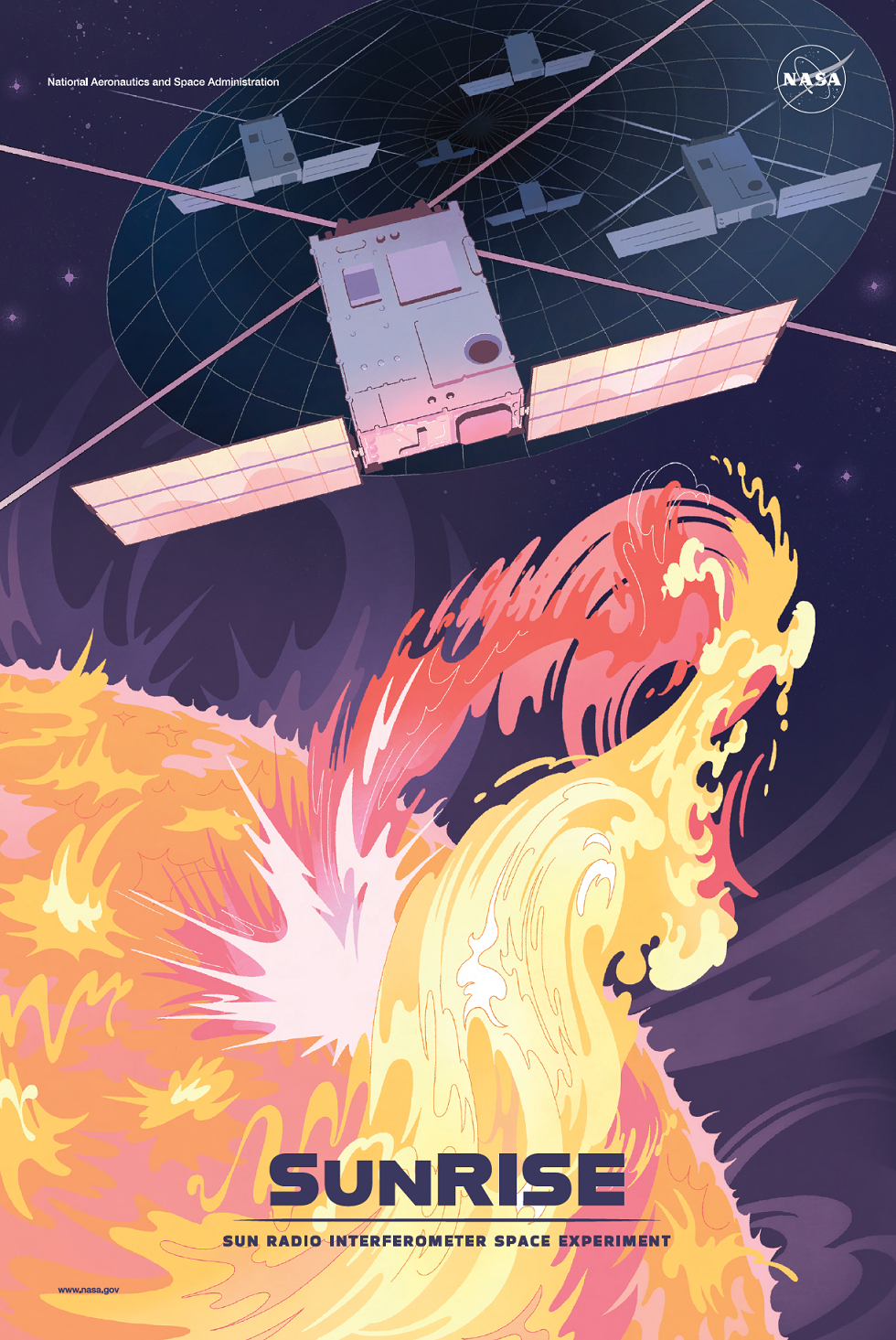 This illustrated poster shows a flare erupting from the Sun and the six SunRISE SmallSats flying in formation. Radio bursts are generated by these explosive events and, to detect them, the satellites create a vast virtual telescope – depicted here by the wireframe dish. Download the poster for free.

Each small satellite, or SmallSat, will act as a single antenna to detect bursts of radio waves from the Sun’s superheated atmosphere, known as the corona. Equipped with four telescoping antenna booms that extend about 10 feet (2.5 meters) to form an “X,” they will orbit Earth from about 22,000 miles (36,000 kilometers) away, swarming together to trace out one virtual radio telescope.

After NASA’s Deep Space Network receives the signals from all six SmallSats, scientists will use the technique of interferometry to create a large-aperture radio telescope as wide as the distance between the SmallSats that are farthest apart – about 6 miles (10 kilometers).

Ground-based radio telescopes, such as the iconic Karl G. Jansky Very Large Array in New Mexico, often use interferometry to combine the observing power of many individual antennas. But SunRISE will have a unique advantage over its ground-based cousins: It will be able to “see” the long radio wavelengths that are blocked by a portion of our planet’s upper atmosphere known as the ionosphere. This means SunRISE will pinpoint where solar radio bursts, or sudden event-type emissions of radio waves, erupt higher up in the Sun’s corona. Then the SunRISE team can create detailed maps of their positions in 3D.

The Sun’s corona is a hotbed of activity, where powerful magnetic fields and superheated solar particles mix, erupting with solar flares and coronal mass ejections (CMEs). Flares and CMEs can, in turn, accelerate solar energetic particles, which also originate in the corona, creating a hazard for human activities throughout the solar system. Solar radio bursts have been associated with solar energetic particle events and are known to precede their arrival at Earth by tens of minutes.

By pinpointing the locations of solar radio bursts, SunRISE will illustrate how an early warning of incoming solar energetic particle events might be of benefit. And if scientists can locate regions of particle acceleration by tracking solar radio bursts relative to where CMEs occur, they can investigate how CMEs lead to radio bursts. In addition to delivering 3D images, SunRISE will map the pattern of solar magnetic field lines that reach far into interplanetary space as the radio bursts are generated along them. The telescope will be constantly watching the Sun for radio bursts popping off randomly throughout the corona.

This animation shows the six SunRISE SmallSats tracing out a virtual space telescope as they detect a solar radio burst (shown as blue ripples) and then transmit their data (shown as green wavy lines) to the Deep Space Network on Earth.

“The ultimate goal of the mission is to help scientists better understand the mechanisms driving these explosive space weather events,” said Justin Kasper, SunRISE principal investigator at the University of Michigan in Ann Arbor. “These high-energy solar particles can jeopardize unprotected astronauts and technology. By tracking the radio bursts associated with these events, we can be better prepared and informed.”

The mission’s observations will be used in conjunction with data from other space missions and ground-based observatories. For example, SunRISE may image solar radio bursts as NASA’s Parker Solar Probe zips through them, providing an opportunity to see how the solar energetic particles are accelerated. And by combining SunRISE data with observations made by the NASA-ESA Solar and Heliospheric Observatory (SOHO), scientists will be able to determine how and where CMEs can trigger different types of radio bursts as they travel from the Sun, and how many of the accelerated particles arrive in Earth’s vicinity.

SunRISE is a Mission of Opportunity under the Heliophysics Division of NASA’s Explorers Program Office. Missions of Opportunity are part of the Explorers Program, the oldest continuous NASA program designed to provide frequent, low-cost access to space using principal investigator-led space science investigations relevant to the Science Mission Directorate’s (SMD) astrophysics and heliophysics programs. The program is managed by NASA’s Goddard Space Flight Center in Greenbelt, Maryland, for SMD. SunRISE is led by the University of Michigan in Ann Arbor and managed by JPL, a division of Caltech in Pasadena, California.