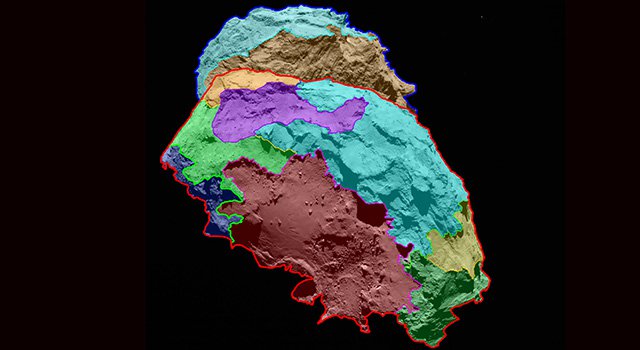 This view of the "belly" and part of the "head" of comet 67P/Churyumov-Gerasimenko indicates several morphologically different regions.› Full image and caption
Credit: ESA/Rosetta/MPS for OSIRIS Team/MPS/UPD/LAM/IAA/SSO/INTA/UPM/DASP/IDA

Scientists on the Rosetta mission have mapped several distinctive regions on the nucleus of comet 67P/Churyumov-Gerasimenko.

Scientists have found that the surface of comet 67P/Churyumov-Gerasimenko -- the target of study for the European Space Agency's Rosetta mission -- can be divided into several regions, each characterized by different classes of features. High-resolution images of the comet reveal a unique, multifaceted world.

ESA's Rosetta spacecraft arrived at its destination about a month ago and is currently accompanying the comet as it progresses on its route toward the inner solar system. Scientists have analyzed images of the comet's surface taken by OSIRIS, Rosetta's scientific imaging system, and defined several different regions, each of which has a distinctive physical appearance. This analysis provides the basis for a detailed scientific description of 67P's surface. A map showing the comet's various regions is available at:

"Never before have we seen a cometary surface in such detail," says OSIRIS Principal Investigator Holger Sierks from the Max Planck Institute for Solar System Science (MPS) in Germany. In some of the images, one pixel corresponds to a scale of 30 inches (75 centimeters) on the nucleus. "It is a historic moment -- we have an unprecedented resolution to map a comet," he says.

The comet has areas dominated by cliffs, depressions, craters, boulders and even parallel grooves. While some of these areas appear to be quiet, others seem to be shaped by the comet's activity, in which grains emitted from below the surface fall back to the ground in the nearby area.

"This first map is, of course, only the beginning of our work," says Sierks. "At this point, nobody truly understands how the surface variations we are currently witnessing came to be."

As both comet 67P and Rosetta travel closer to the sun during the next few months, the OSIRIS team and other instruments on the payload will monitor the surface to look for changes. While scientists do not expect the borderlines they have identified for the comet's different regions to vary dramatically, even subtle transformations of the surface may help to explain how cometary activity created such a breathtaking world.

The new comet maps will offer valuable insights for members of the Rosetta team, who plan to gather in Toulouse, France, on September 13 and 14, to determine a primary and backup landing site from five candidates they previously had selected.

Rosetta is an ESA mission with contributions from its member states and NASA. Rosetta's Philae lander is provided by a consortium led by DLR, MPS, CNES and ASI. Rosetta will be the first mission in history to rendezvous with a comet, escort it as it orbits the sun, and deploy a lander to its surface.