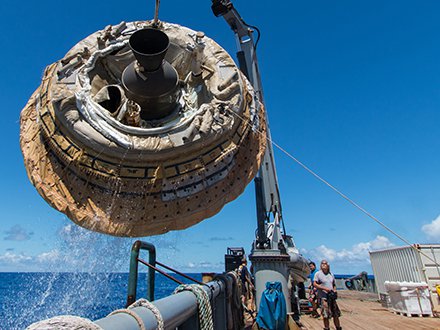 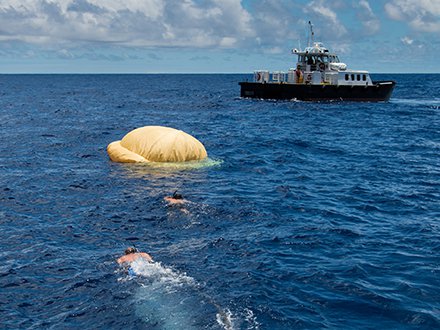 Two members of the Navy's Explosive Ordinance Disposal team swim towards the pilot ballute (a combination balloon and parachute used for braking at high altitudes and speeds) that was used to deploy the parachute. The recovery vessel Mana'o II is in the background.› Full image and caption
Credit: NASA/JPL-Caltech 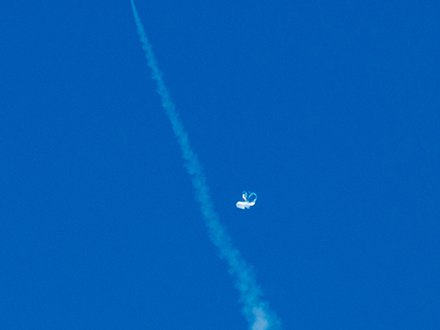 This image, taken by a member of NASA's Low-Density Supersonic Decelerator team onboard a recovery vessel, shows the initial moments of the June 28, 2014, powered flight of the saucer-shaped test vehicle.› Full image and caption
Credit: NASA/JPL-Caltech 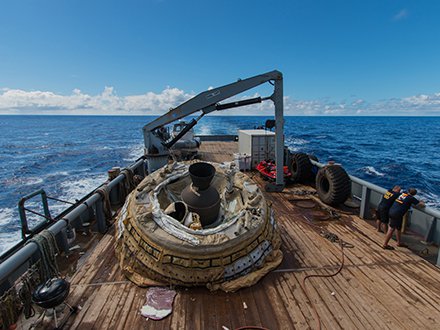 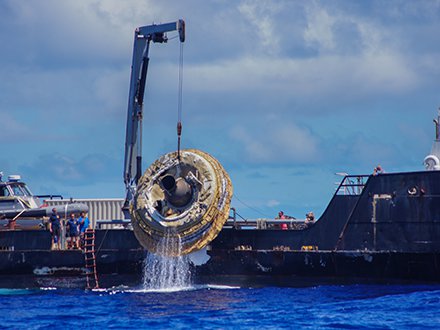 NASA representatives participated in a media teleconference this morning to discuss the June 28, 2014 near-space test flight of the agency's Low-Density Supersonic Decelerator (LDSD), which occurred off the coast of the U.S. Navy's Pacific Missile Range Facility in Kauai, Hawaii.

A high-altitude balloon launch occurred at 8:45 a.m. HST (11:45 a.m. PDT/2:45 p.m. EDT) from the Hawaiian island facility. At 11:05 a.m. HST (2:05 p.m. PDT/5:05 p.m. EDT), the LDSD test vehicle dropped away from the balloon as planned and began powered flight. The balloon and test vehicle were about 120,000 feet over the Pacific Ocean at the time of the drop. The vehicle splashed down in the ocean at approximately 11:35 a.m. HST (2:35 p.m. PDT/5:35 p.m. EDT), after the engineering test flight concluded. The test vehicle hardware, black box data recorder and parachute were all recovered later in the day.

"We are thrilled about yesterday's test," said Mark Adler, project manager for LDSD at NASA's Jet Propulsion Laboratory in Pasadena, California. "The test vehicle worked beautifully, and we met all of our flight objectives. We have recovered all the vehicle hardware and data recorders and will be able to apply all of the lessons learned from this information to our future flights."

"Because our vehicle flew so well, we had the chance to earn 'extra credit' points with the Supersonic Inflatable Aerodynamic Decelerator [SIAD]," said Ian Clark, principal investigator for LDSD at JPL. "All indications are that the SIAD deployed flawlessly, and because of that, we got the opportunity to test the second technology, the enormous supersonic parachute, which is almost a year ahead of schedule."

The Supersonic Inflatable Aerodynamic Decelerator (SIAD) is a large, doughnut-shaped first deceleration technology that deployed during the flight. The second is an enormous parachute (the Supersonic Disk Sail Parachute). Imagery downlinked in real-time from the test vehicle indicates that the parachute did not deploy as expected, and the team is still analyzing data on the parachute so that lessons learned can be applied for the next test flights, scheduled for early next year.

"This entire effort was just fantastic work by the whole team and is a proud moment for NASA's Space Technology Mission Directorate," said Dorothy Rasco, deputy associate administrator for the Space Technology Mission Directorate at NASA Headquarters in Washington. "This flight reminds us why NASA takes on hard technical problems, and why we test - to learn and build the tools we will need for the future of space exploration. Technology drives exploration, and yesterday's flight is a perfect example of the type of technologies we are developing to explore our solar system."

For more information about the LDSD space technology demonstration mission:

The follow-along page from the media teleconference can be found at: http://www.nasa.gov/jpl/ldsd/telecon2014/