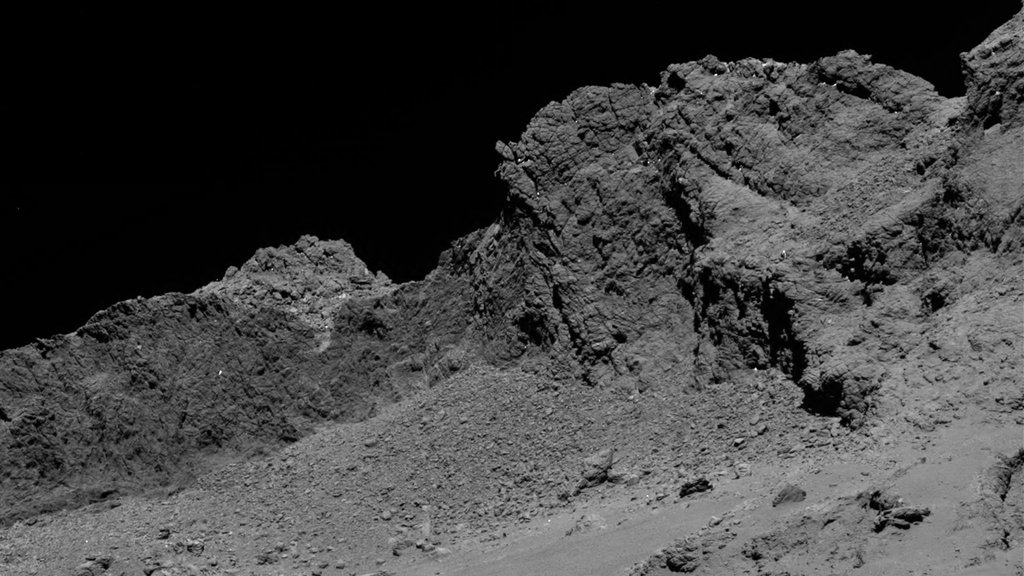 The OSIRIS narrow-angle camera aboard the Space Agency's Rosetta spacecraft captured this image of comet 67P/Churyumov-Gerasimenko on September 30, 2016, from an altitude of about 10 miles (16 kilometers) above the surface during the spacecraft's controlled descent. The image scale is about 12 inches (30 centimeters) per pixel and the image itself measures about 2,000 feet (614 meters) across. 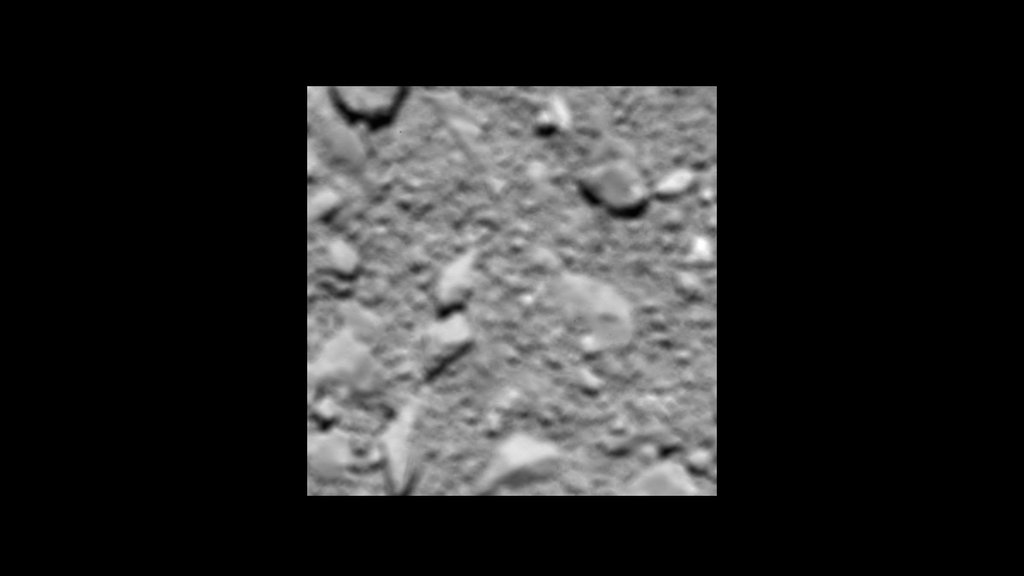 Rosetta's last image of Comet 67P/Churyumov-Gerasimenko, taken shortly before impact, at an estimated altitude of 66 feet (20 meters) above the surface. The image was taken with the OSIRIS wide-angle camera on 30 September. The image scale is about 5 mm/pixel and the image measures about 2.4 m across. Credits: ESA/Rosetta/MPS for OSIRIS Team MPS/UPD/LAM/IAA/SSO/INTA/UPM/DASP/IDA

A new image of comet 67P/Churyumov-Gerasimenko was taken by the European Space Agency's Rosetta spacecraft shortly before its controlled impact into the comet's surface.

A new image of comet 67P/Churyumov-Gerasimenko was taken by the European Space Agency's (ESA) Rosetta spacecraft shortly before its controlled impact into the comet's surface on Sept. 30, 2016. Confirmation of the end of the mission arrived at ESA's European Space Operations Center in Darmstadt, Germany, at 4:19 a.m. PDT (7:19 a.m. EDT / 1:19 p.m. CEST) with the loss of signal upon impact.

The final descent gave Rosetta the opportunity to study the comet's gas, dust and plasma environment very close to its surface, as well as take very high-resolution images.

The final image was taken from an altitude of 66 feet (20 meters) above the comet's surface by the spacecraft's OSIRIS wide-angle camera on Sept. 30. The initial report of 167 feet, or 51 meters, was based on the predicted impact time. Now that the time has been confirmed, and following additional information and timeline reconstruction, the estimated distance has been updated. Analysis is ongoing.

The image scale is about two-tenths of an inch (5 millimeters) per pixel. The image measures about 9 feet (2.4 meters) across.

The decision to end the mission on the surface is a result of Rosetta and the comet heading out beyond the orbit of Jupiter again. Farther from the sun than Rosetta had ever journeyed before, there would be little power to operate the craft. Mission operators were also faced with an imminent month-long period when the sun is close to the line-of-sight between Earth and Rosetta, meaning communications with the craft would have become increasingly more difficult.

The European Space Agency's Rosetta mission was launched in 2004 and arrived at comet 67P/Churyumov-Gerasimenko on Aug. 6, 2014. It is the first mission in history to rendezvous with a comet and escort it as it orbits the sun. On Nov. 4, 2014, a smaller lander name Philae, which had been deployed from the Rosetta mothership, touched down on the comet and bounced several times before finally alighting on the surface. Philae obtained the first images taken from a comet's surface and sent back valuable scientific data for several days.

U.S. contributions aboard the Rosetta spacecraft are the Microwave Instrument for Rosetta Orbiter (MIRO); the Alice spectrograph; the Ion and Electron Sensor (IES), part of the Rosetta Plasma Consortium Suite; and the Double Focusing Mass Spectrometer (DFMS) electronics package for the Rosetta Orbiter Spectrometer for Ion Neutral Analysis (ROSINA). They are part of a suite of 11 total science instruments aboard Rosetta.