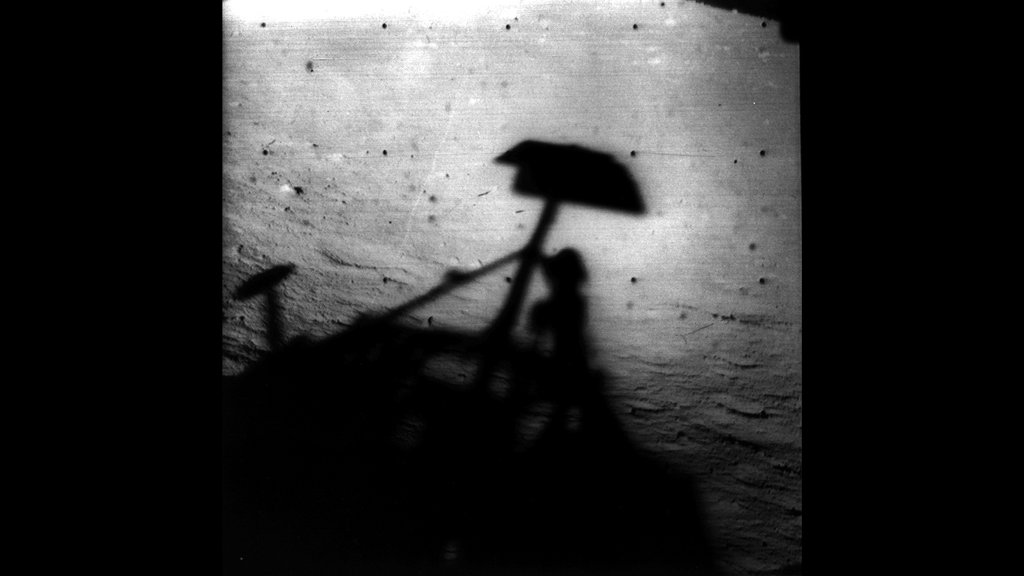 Image of Surveyor 1's shadow against the lunar surface in the late lunar afternoon, with the horizon at the upper right.› Full image and caption
Credit: NASA/JPL

Surveyor 1 landed on the moon on June 2, 1966, marking America's first controlled touchdown on the lunar surface.

Before humans could take their first steps on the moon, that mysterious and forbidding surface had to be reconnoitered by robots. When President John Kennedy set a goal of landing astronauts on the lunar surface in 1961, little was known of that world, beyond what could be gleaned from observations by telescopes.

We knew it was rocky, bleak and heavily cratered -- how might these conditions affect the landing of a spacecraft there? Was the surface sufficiently solid to support the 33,500-pound Apollo lunar lander? Or was it so deeply covered in dust from billions of years of meteorite impacts, as some theorized, that the lunar module would simply sink out of sight, dooming the astronauts? These and a hundred other questions about the surface composition dogged mission planners, so a robot would make the dangerous journey first - the lunar lander from NASA's Jet Propulsion Laboratory.

The first probes to reach Earth's nearest neighbor were Russian. Luna 2 impacted the surface in 1959, and the moon was photographed from orbit by another Soviet robot later that year. The U.S. flew a series of impactor probes called Ranger; the first success of that program was Ranger 7, which returned 4,300 images of increasing resolution during the final 17 minutes of flight in 1964. The USSR scored another coup when it made the first soft landing and took the first low-resolution photos of the moon's surface, in February 1966. A series of U.S. mapping spacecraft called Lunar Orbiter photographed the moon from orbit in 1966 and 1967. But it would be the Surveyors that would scout that rugged surface for Apollo, and 50 years ago this week, the first of that series of landers touched down successfully. Surveyor 1 landed on the moon on June 2, 1966.

The leap from impactors and airbag landings to a controlled landing was a big one, and required new, never-before-attempted techniques in guidance, navigation, robotics and imaging. Surveyor was the first spacecraft of its kind, a go-for-broke program that was racing to return data even as the Apollo program was in high gear. The first crewed Apollo landings were expected sometime in 1968 or 1969, so time was short.

Justin Rennilson, formerly of JPL, was the co-principal investigator on the Surveyor television experiment. "Planning for Apollo required getting really high-resolution images showing the details of the lunar surface, because they were talking about designing a spacecraft that would safely land on the lunar surface as we would with Surveyor," he said. "Telescopic photographs of the moon were taken from Earth, but what we needed were high-resolution images to study the rocks on the lunar surface. Even something two feet in size could topple a spacecraft."

The Surveyor program was already in the pipeline before President Kennedy announced his goals for lunar exploration. Surveryor had been intended as a scientific investigation of the moon. But its mission was revised immediately after the young president's address to a joint session of Congress: "I believe this nation should commit itself to achieving the goal, before this decade is out, of landing a man on the moon and returning him safely to Earth." With those words, NASA would steer the bulk of Surveyor's mission toward supporting that goal.

The first Surveyors were tasked with reaching the lunar surface successfully via a soft landing, then investigating the physical properties of the nearby landscape to understand the risks and challenges to landing astronauts there. But that first successful landing was far from assured. NASA had accomplished flybys of Venus and Mars, but had not attempted landing on any celestial body before Surveyor. Among hundreds of other challenges, an uninterrupted communication link for navigation and control would be critical to success.

"We figured the probability of success at around 10 to 15 percent," Rennilson said. "We had a lot of problems, not only on the spacecraft but also at JPL. The lab, which managed the Surveyor program for NASA, had just recently finished a new space flight operations facility, the SFOF. This had a telemetry connection with Goldstone, a tracking station in the California desert (now part of NASA's Deep Space Network) that would be accommodating the communication needs of the spacecraft during landing. But there were signal dropouts. They didn't know what to do, so they sent me to Goldstone." He arrived at the tracking station just prior to the landing on June 2.

Surveyor had been sent on a direct trajectory -- it would not enter lunar orbit before landing, but would hurtle directly towards the surface at 6,000 mph (9,700 kilometers per hour). The thrusters had to fire at precisely the right moment and maintain perfect orientation to communicate with Earth, all the way down.

"I remember sitting there watching the oscilloscope as the spacecraft was coming down, all the way to the lunar surface. 'God, the signal is still there and it is still working!' I thought. We were successful and it was just astounding." Immediately upon Surveyor's arrival on the moon, Rennilson hopped another plane to return to JPL.

After the failure of a number of the Ranger spacecraft en route to the moon, the success of the first Surveyor landing was an incredible relief. William Pickering, the director of JPL from 1954 through 1976, recalled in a 1978 Caltech interview that he had some concerns about the television networks' request to carry the landing live on what he thought was to be national coverage: "We finally ended up by agreeing to let them do it, and we kept our fingers crossed and hoped it was going to be all right. But the thing that startled me was that about a half an hour before it was due to land, one of the network people said, 'Oh, by the way, we're live all over the world,' which really sort of shook me. Fortunately, it worked, and in fact, sometime later a friend of mine told me that he was in Paris, and he just idly turned on the television set and there was Surveyor 1 landing on the moon."

With Surveyor 1 down and safe, the exploration of the moon would now begin in earnest. The landing site was a few dozen miles north of a 13-mile-wide (21-kilometer) crater called Flamsteed that resided within Oceanus Procellarum, the largest of the moon's smooth basaltic mare, or plains. The first views of the lunar surface were striking, but not easily acquired. Photography from space was still in its infancy.

The camera was advanced for its time, a slow-scan television imager with a zoom lens -- the first time such an arrangement had been used in space. The goal of the researchers was to gather enough imagery to identify and investigate specific surface features, and also to create panoramic photos that would allow them to get a sense of the overall nature of the surface and any threats it might pose to the Apollo lunar lander.

The first sets of panoramic images were created using a then-new technique of taking instant-photography images from a small TV screen and then assembling the photographs into a larger image. Rennilson remembers the process vividly: "We had a Polaroid camera attached to a 5-inch-diameter CRT so that you could capture images on Polaroid film. These images were given to a crew that we had trained -- who would put them down in a particular order -- to create the panoramas." That crew trained long and hard to prepare for the process. "We got so that after years of practicing, we were able to put down a panorama about three to four minutes after completing all that panning of the lunar surface."

By the end of Surveyor 1's mission six months after it landed on the moon, 11,240 images had been returned, allowing for the creation of dozens of wide panoramas and allowing the examination of details as small as 0.04 inches (1 millimeter) in diameter. Images of the three footpads demonstrated that not only was landing on the moon possible, but that the lander had not sunk into deep moon dust -- as was feared by some scientists -- but had landed on a firm, supportive surface. Beginning with Surveyor 3, a scoop attached to an extendable arm allowed scientists to investigate the texture and hardness of the lunar surface. By the time Surveyor 7 completed operations on the moon in February 1968 -- just 10 months before Apollo 8 orbited the moon -- the pathway to the first crewed lunar landing of Apollo 11 on July 20, 1969, was open. The Surveyor program had been critical to that accomplishment.

Rennilson concludes: "The Chinese have an interesting saying: 'When you take a drink of water, you should think of the source.' I think that applies to the early unmanned space program. JPL has engineered so much of the modern stuff we do in space today. My remembrances are primarily about all the great things that we saw. So when Apollo landed, and when Curiosity landed on Mars, it was a great feeling."